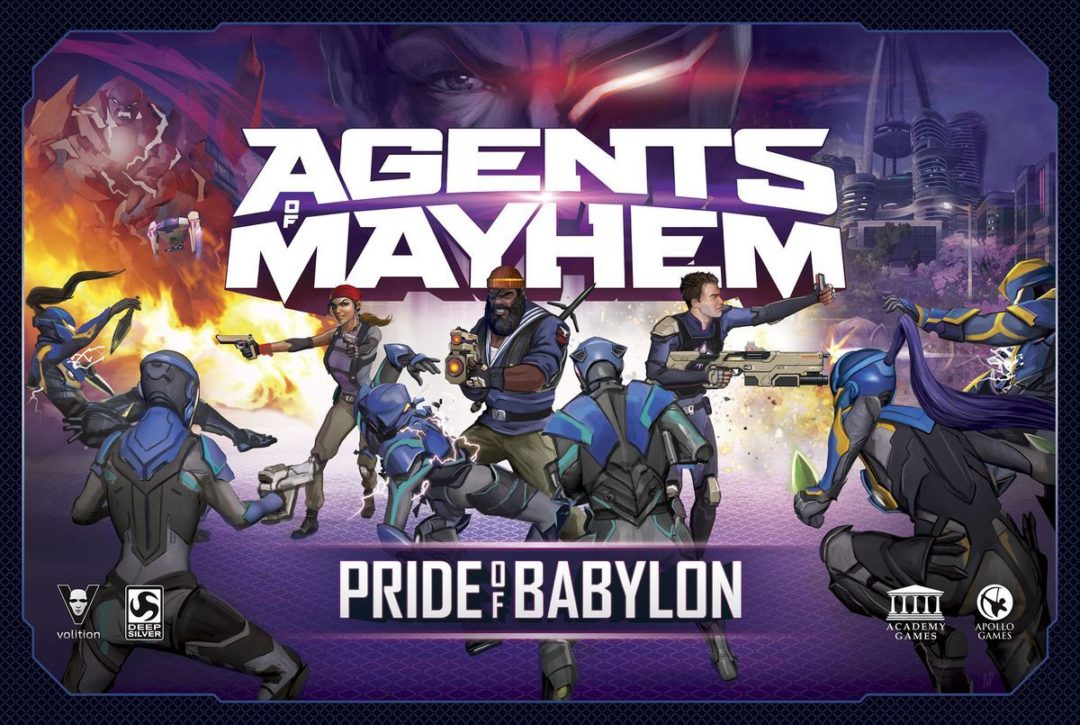 The 45th annual Origins Game Fair provided attendees with five days of access to new board, card, and tabletop roleplaying games. It was also an opportunity for some of the event’s 250 vendors to preview games that haven’t been published yet, showing off early copies and rough prototypes ahead of preorders, Kickstarters, or launches later this year.

After four days in the Greater Columbus Convention Center playtesting games and speaking with their designers, here are the five games I’m most looking forward to adding to my collection. Stay tuned next week for a more in-depth preview of Pathfinder Second Edition.

Agents of Mayhem: Pride of Babylon

Based on Volition’s Agents of Mayhem, the 2017 spinoff of the Saints Row series, Academy Games’ board game has players go head to head or team up against each other in highly customizable skirmishes on a 3D map. Like Descent or the Conan board game, each scenario has different objectives depending on what side you’re playing on. Players take on the role of antiheroes or supervillains and their minions then face off using a wide variety of powers and gadgets that let them move around the board and blow it up, with each tile having a secondary face indicating it’s become collateral damage.

The game emphasizes replayability by letting players choose between a variety of cards that are slotted into their characters before the start of the game that will affect their available tactics. You can play as part of a story mode campaign with branching narratives and the chance to level up between sessions by giving your characters extra options. Those options aren’t necessarily more powerful though, so you shouldn’t have to worry about one side falling behind because of an early loss. Agents of Mayhem also includes a deck of cards that can be used to create procedurally generated levels and missions, and a successful Kickstarter unlocked several expansions with additional characters. Like it’s source material, you can expect plenty of irreverent humor adding fun to the tactical gameplay.

Ankama’s charming game provided a great palate cleanser between the heavier, longer, and more tactical games that dominated my weekend. Two to five players must build the best version of Jurassic Park that they can while undermining their opponents. Players start by drawing six random brightly colored dino figures out of a bag and choosing one to place in their park, passing the rest down the line. Each section of the park lets players add to their final score based on what’s living there, so you want to have one pen showing off your diverse collection with as many different types as possible, another devoted to mating pairs of dinos, and a spot for the only dino of its type you have in the park.

The real challenge comes from placement restrictions which are determined each round based on a roll of a die. Jurassic Park taught us that the Tyrannosaurus rex is awesome, and you get one point for each one you have in your park at the end of the game, but also that it’s prone to eating other dinosaurs, so there are turns you just can’t put new dinosaurs anywhere you’ve already got one of the massive carnivores. Other times you can only place figures in particular areas of the park so you’re forced to make some suboptimal moves based on what you’ve got in hand and what strategies you’re already developing. It only takes about 15 minutes, but it’s good cute fun.

Another fast drafting game, CMON’s Foodies has players pick dishes from around the world to serve in their food court with the goal of making money and becoming the most popular place to eat. Players get a Bingo-style board and take turns rolling a 10-sided die and getting whatever reward on their board corresponds to the number. That starts out just giving you some coins, but the currency can be used to buy dishes and add them to your board and have their specific effects trigger instead. Each type of cuisine has different effects, so Brazilian fare becomes more lucrative if it’s part of a board with a diverse range of offerings while American food makes extra money if you’ve got the most American options in town.

There are also popularity bonuses gained by arranging some pieces like a puzzle, celebrity chefs that can be hired if you form specific patterns or collect sets of cards, and limited resources that can be used to tweak the die roll to get a key reward when you need it. It’s simple to learn but strategically complex and gains replayability by letting you pick which regional foods you’re playing with each round. Also all the art looks delicious.

The latest game from Formal Ferret, the developers behind The Networks, High Rise has players trying to dominate the skyline by constructing the tallest buildings. That’s rarely an honest process and throughout the game players will have the opportunity to gain corruption, which will cost them points at the end of the game, in order to accelerate their plans. They can speed up development through ill-gotten extra resources or by making stronger plays by ignoring zoning requirements that would otherwise limit where they can build. Gameplay is reminiscent of the Dungeons & Dragons-based board game Lords of Waterdeep: Scoundrels of Skullport in that controlling various spaces around the board will give you advantages if your opponents want to use them and everyone is constantly trying to take advantage of the system while avoiding being the most corrupt.

Even though I was only playing with a rough prototype, High Rise is a striking game to look at. Higher towers are worth more points so there’s a very clear visual indicator of who’s doing well. There’s even a space you can visit to add spires to your towers to make them even taller. I also enjoyed the strategy involved in a turn order mechanic that could let players jump ahead to any square on the board with the caveat that they wouldn’t be able to take another action until everyone caught up. There are also numerous cards that let you use corruption to break various rules of the game like visiting an already occupied tile. I’m really looking forward to seeing the finished product and settling in for a long game to experience how strategies develop over the course of multiple rounds.

Z-Man Games has managed to solve two of the biggest problems with their signature collaborative game in Pandemic: Rapid Response. This version has a crack team of crisis responders flying around the world delivering humanitarian aid to disaster stricken countries. But you’re literally on a clock, with only a limited number of turns of a two-minute timer (determined by what difficulty you’re playing on) to get help everywhere it’s needed. That keeps the game from getting bogged down by too much advance planning based on what everyone should be doing for turns to come, forcing everyone to just focus on their own roles and make decisions quickly.

Players take turns running around trying to generate resources, airdrop supplies, fly the plane and eliminate waste. Their ability to do each of these things is determined by what they roll in a Yahtzee-style mini game so even the best laid plans might fail with a bit of bad luck. Each character has special abilities that make them better at certain types of actions but we found everyone was just chipping in doing what was needed. It’s chaotic, inherently fast and extremely satisfying when you can eek out a victory.

Child’s Play Did Not Need A Remake

How to Fix Mass Effect: Andromeda