Dreams, psychic drawings, and interviewing a log are all useful techniques on Agent Cooper’s hunt for the killer.

This episode is titled “Cooper’s Dreams”, which is ironic, since Cooper’s dreams are interrupted as the episode opens just before 4:30 in the morning. What stirs him isn’t a knife-wielding maniac or a vision or a shockingly young woman making a pass at him (that happens later): Cooper is awakened by a group of Icelandic businessmen singing at the top of their lungs. He is downright grumpy up until he has his second cup of coffee and a doughnut a few scenes later on.

Before leaving the Great Northern Hotel, Ben Horne is shown dealing with his morning. His brother, Jerry, comes bounding in while giving his good wishes to the singing Icelanders. You know that he was in the thick of the late night singing session, because he’s exactly that kind of guy. For example, he’s holding a leg of lamb like a baby during the entire scene. Jerry Horne is fun-loving, but a bit weird even by Twin Peaks standards which is quite an accomplishment.

The brothers Horne have invited the group from Iceland into their hotel to entice them into investing in Ghostwood, a country club real estate development project (or something). But as they are discussing their plans, Leland Palmer walks into the room. Leland is Ben’s lawyer, and was always involved in real estate ventures before, but since the death of his daughter, Leland has endured a very poignant nervous breakdown. The last episode ended with him collapsing into an emotional wreck in the middle of a dance floor. His daughter, Laura, had always danced with him before, and now she was gone forever. Leland has gone back to work as a way to get his mind off of his daughter, but he’s clearly not ready for it yet.

Agent Cooper arrives at Jacques Renault’s apartment, and the first thing he does is ask for coffee and doughnuts. Immediately after taking his first bite of pastry, Cooper is boosted out of his morning funk by the discovery of more clues concerning the whereabouts of Laura Palmer on the night of her murder. They find a magazine called “Flesh World” which has appeared in various scenes of interest so far, and they find out that Jacque owned a cabin with red drapes (like in Cooper’s dream), which is a good, solid, intuition-inspired lead.

But by this point in the series, Laura Palmer’s murder is not the only currently unfolding event that viewers have tuned in to see.

The action moves on to the always-under-construction Johnson household next. Leo Johnson (who is a strong suspect, and an obvious bad guy in the ensemble cast) is out trucking, or drug trafficking, or planning the arson of the Packard Mill which will take place in the next few days. Where Leo is at the moment doesn’t matter, because Shelly (his wife) and Bobby (her secret boyfriend, who was also dating Laura when she was murdered) are having breakfast. They banter back and forth about their plan to take care of Leo (by setting the cops on his trail).

This would be a great time to talk about gun safety. Why? Because right before the ten minute mark in the episode, Bobby Briggs demonstrates just how much he should not be allowed to handle a gun. He waves it around like a toy, pointing it at Shelly’s chest several times while having a pretend conversation with her husband, and holding his finger on the trigger the entire time. This is about the most idiotic and naïve display of gun etiquette I have ever seen on screen. Most times, when someone holds a gun on TV, they know how to use it. Every single thing about the way Bobby handles that gun demonstrates that he has no idea how to use it and is in over his head. 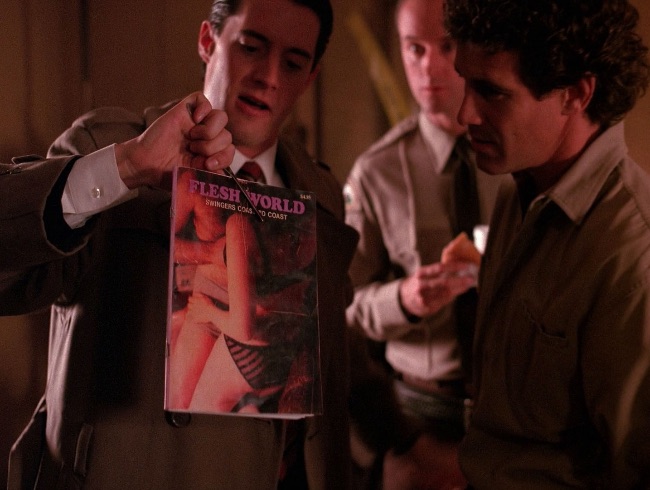 This concept is underlined later on during a counseling session with the Briggs family and Dr. Jacoby. Bobby is very defiant and angry when he is with his parents, but when Dr. Jacoby has Bobby to himself, and confronts him with the fact that Bobby cried the first time he slept with Laura, Bobby breaks down into tears again. Laura told Dr. Jacoby about that because she was seeing him in secret (as a patient). Laura was also sleeping with Dr. Jacoby (because libidos in Twin Peaks never really rest).

There are a few new characters who were introduced in the last episode that get a little more screen time and purpose here. Laura Palmer’s cousin, Maddy (who looks just like Laura because they are both played by Sheryl Lee) joins with Donna and James in their investigation. The three of them remain on the case together for quite some time.

Hank Jennings is also brought into the fold. He is the ex-con husband of diner-owner Norma Jennings (who is secretly seeing Big Ed Hurley), and apparently he was Leo Johnson’s boss before being locked up. So far, Leo has been the best example of a dangerous character in the show, so if he’s answering to Hank, you know that Hank is bad news.

Cooper, Truman and the gang then go to interview the Log Lady about what her Log saw the night of Laura’s death. They take this encounter just as seriously as the psychic sketch from Mrs. Palmer’s vision in the last episode. It turns out later that they are right to treat these encounters seriously, as they all help in some way to bring them closer to the truth. Afterwards, they discover the cabin where Laura and Ronette Pulaski were taken the night Laura was killed. Clues discovered in that cabin include the bird that left bite marks on Laura, and a poker chip from One Eyed Jacks with a piece missing, which had been found in Laura’s stomach.

The third act keeps up the pace set very well, but I don’t want to spoil any of it. There’s a payoff regarding the Packard Mill arson conspiracy, and in the final moments Shelly Johnson stands up to her deadbeat husband in a way that I won’t describe, but you should definitely see. The very end of the show displays Audrey Horne also taking action on thoughts and plots she had merely dreamed about so far (concerning her infatuation with Agent Cooper), but right as Cooper is confronted with Audrey’s bold move, the credits start to roll. This cliffhanger is not quite as terrifying as others used so far, but still leaves the audience wanting more.

Bottom Line: There are so many “Did that actually just happen?” moments in this episode, you might not believe there were two more left in the season. But don’t worry, there are plenty more twists and turns still up ahead.

Recommendation: This episode might not make sense if you are only selectively viewing, but it does have lots of classic moments well worth watching.

This Is How Star Wars Can Redeem Midichlorians