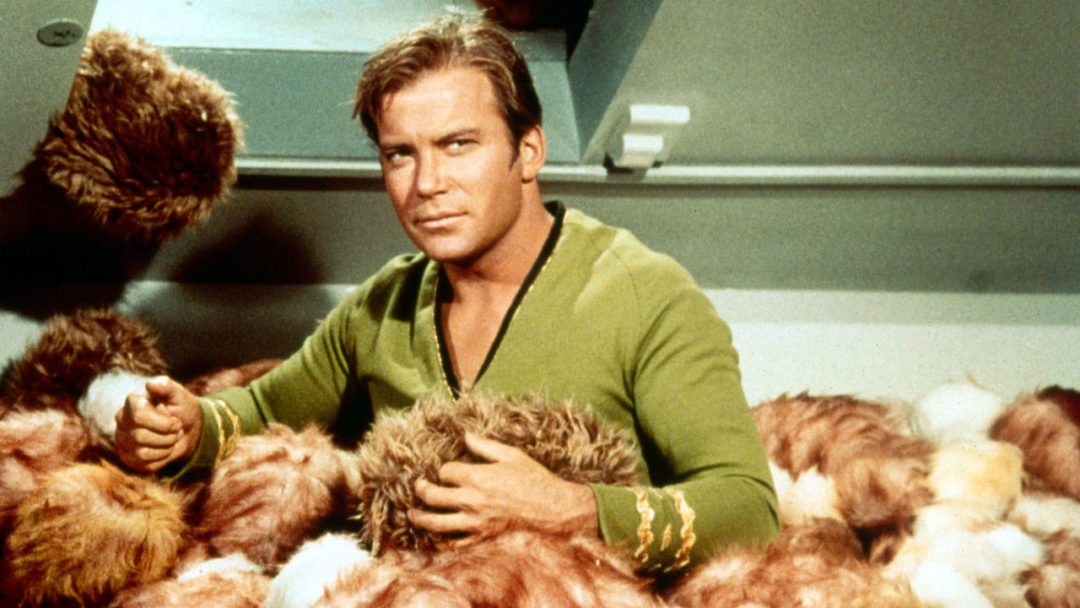 “I became as a pure crystal submerged in a translucent sea, and I knew I had been awakened; I had TOUCHED the FACE of God!” (Horn! Flourish!)

Those are the final, flamboyant words of William Shatner’s magnificently overcarbonated 1968 spoken word classic, The Transformed Man. The album has long been considered a classic of campy wonderful awfulness. It also perfectly captures the hammy, square counterculture optimism of Gene Roddenberry’s original Star Trek. Trusting in the future looks as ridiculous now as it ever has, which means Shatner’s self-parody has rarely sounded so irrelevantly relevant, or relevantly irrelevant, as it does today.

Back in the ‘60s there was a vogue for celebrity recordings. Shatner’s Star Trek co-star Leonard Nimoy released a number of albums, including some in character as Mr. Spock, and covers of popular songs, like “If I Had a Hammer.” Nimoy’s message of peace, love and understanding, delivered with brow-furrowing sincerity and a technically limited vocal range, were undoubtedly ridiculous. But Shatner’s efforts were something else.

The two most famous Shatner performances on The Transformed Man are probably his take on two hippie anti-establishment anthems: The Beatles’ “Lucy In the Sky With Diamonds” and Bob Dylan’s “Mr. Tambourine Man.” Shatner turns them both into passionate statements of faith or dismissive acid mockery — it’s impossible to tell which. On “Lucy” he sounds like your dad taking drugs for the first time. “Cellophane flowers — of yellow! And green! Towering OVER your head. Look for the girl (pause) with the sun in her eyes (pause) and (bombastic yawp) she’s gone!” “Mr. Tambourine Man” is even more over-the-top, if that’s possible; Shatner adopts a vague Irish accent so that “in the jingle-jangle morning, I’ll come following you” sounds like it’s being exclaimed by a woozy leprechaun. At the end of the song, he just flat out screams, “Mr. Tambourinnneee Mannnn!” as if he’s lost his last friend. Dylan’s would-be poetic evocation of a hobo rebel is turned into a flat out psychotic break. Though that’s presuming Shatner isn’t just making fun of the overwrought lyrics.

Shatner also records a Frank Sinatra song (“It Was a Very Good Year”) and a number of Shakespearian monologues. These don’t reach quite the same heights of silliness, but are still performed in Shatner’s signature start-stop delivery which makes them fairly giggle worthy, especially with lounge music in the background. Then there’s the title track about a workaday time server who walks away from his boring life and has a spiritual epiphany: “Cutting myself adrift from the past and the future, I became immersed in the of the living moment, the eternal (Pause) nowwwww!”

In The Transformed Man, Shatner is the Man. He’s making fun of hippies and their pure crystal sparkly diamond eyes. But he’s also the hippie space cadet making fun of the dull daddy trying to be hip. He’s a square and a dreamer. That’s the same dynamic Shatner that made Captain Kirk a legend on Star Trek.

The Starship Enterprise was supposedly powered by dilithium crystals, but the real engine was a sixties hippie dream that the fuddy duddies in power would suddenly become trustworthy and cool. Starfleet is a military outfit run by anti-militarists who dress in uniforms which are also pajamas. Captain Kirk is a red-blooded John Wayne He-Man authority figure who is also always mocking other authority figures as he spreads peace throughout the galaxy.

In the classic episode “A Piece of the Action,” for example, a landing party beams down to a planet organized along the lines of 1920s criminal gangs. Kirk responds by becoming more gangster than the gangsters. He dresses in snazzy suits, swaggers around with a Tommy gun, and adopts a tough guy Chicago accent. Shatner appears to be having the time of his life pretending to be pretending to be a ruthless mob boss complete with a sexy gun moll and snappy patter. “Now, listen, sweetheart, the Federation’s movin’ in. We’re takin’ over,” Kirk tells a surprised native. “You play ball, we’ll cut choo in for a piece o’ de pie. You don’t, you’re out. ALL de way out, you know what I mean?” With the accent, the cosplay attitude, and the gleeful self-parody; the monologue could be a bonus track on The Transformed Man.

Part of the fun of the episode is watching Shatner adopt the role of ruler of everything while simultaneously letting you know that he thinks rulers of everything are laughable. That’s the appeal of Star Trek. It’s a future in which the hippies won so thoroughly that now even the Man is a hippie. Or maybe it’s a future in which the Man became so darn hip the hippies didn’t need to bother to overthrow him anymore. What if the president were cool and had your best interests at heart? What if he wore pajamas and took LSD? That would be a very good year.

It’s silly and kind of childish to want the uber-Daddy to be nice and kind and to take care of everything. The Transformed Man mocks the idea that the squares can be hip — but it does so by  mocking the squares and the hip alike. The tale of the guy who sees the face of God is ridiculous. But Shatner’s hyperbolic corny reading is its own kind of rejection of the workaday grind. If fuddy-duddy cluelessness is this much fun, is it really fuddy-duddy cluelessness at all?

Post-Shatner Star Trek never quite regained that precise balance of doofy swagger. Star Trek: The Next Generation tips towards the peace and love with Picard feeling more like man transformed and less like the Man. The rebooted films may have brought back Captain Kirk but they’ve upped the slick action/adventure feel, and lost the thick-sliced ham.

The Transformed Man, and Star Trek both seem like the product of a very particular moment in the ‘60s when veneration and contempt for the present seemed to mix and cancel each other out and open a way to a better future. For a second, Shatner could read anything and turn it into a glorious pratfall, boldly flopping and farting, pausing and bellowing where no man had gone before.

Dark Souls and Game of Thrones Creators Reportedly Team Up