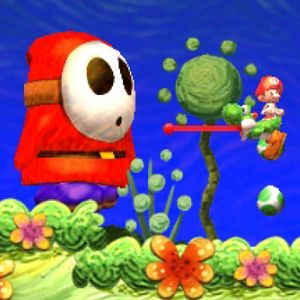 Nintendo loves many things, not least revisiting old games and then putting “new” in the title, so as to let you know that the old thing is a new thing. Yoshi’s New Island picks up where the New Super Mario Bros. games left off, resurrecting the Yoshi’s Island series with a facelift and an armful of nostalgia. Sadly, while it’s a competent platformer, it’s not exactly a thrill ride.

The fundamentals of the classic platforming series are all in place. Incorrigible child snatcher Kamek is once again trying to kidnap Baby Mario, having successfully nabbed Baby Luigi for some perverse reason or another. Rather than hide Baby Mario somewhere safe, the Yoshi clan decide instead to march that vulnerable child right up to the gates of Bowser Junior’s castle, because rescuing Luigi while bringing Kamek the other infant he wants is a sound logical plan to these creatures. I know they claim something about the brothers have a “psychic link,” but come on. It’s never been hard to find Bowser or his cronies.

In any case, the Yoshis run a circuit through their new island, transporting Baby Mario on their backs. As always, you’ll be using your dinosaur’s tongue to snatch up enemies, which can be squirted out as eggs. Eggs are used to throw at other opponents, collect hard-to-reach items, break walls, or activate floating clouds. An oscillating trajectory marker indicates the angle at which Yoshi will throw its egg, and players will have to time their tosses accurately (though this trajectory marker can be held in place with the press of a shoulder button). Eggs add a light puzzle element to the gameplay, and are used to relatively clever effect in boss battles, though nothing too mentally challenging ever presents itself.

Yoshi’s New Island is not, in fact, particularly challenging in any way. While things naturally become trickier as the game progresses, most of the experience is relatively easy to get through. If Yoshi is hit by an enemy, Baby Mario will float off in a bubble and will need to be caught before a timer runs out, but it’s usually very easy to retrieve him. Most of the time, damage is suffered only by an enemy ambushing the player by rushing in from the sides, meaning the game is very rarely difficult – merely occasionally irritating. If you do happen to die several times, Nintendo has yet again tossed in a pity item to help you, granting Yoshi wings that allow him to fly through a stage with ease. It’s worth seeing once, just because Yoshi makes a pretty adorable noise while flapping through the air.

Challenge is not required for a fun game, of course, and New Island is sometimes that. A handful of levels have a quick pace to them, especially those stages in which a giant Chomp is giving chase. There is plenty of replay value, too, with red coins and flowers acting as obligatory optional collectibles.

However, while Yoshi’s 3DS outing boasts some charm and is certainly inoffensive, it’s just not all that exciting. The laid back pace and relative simplicity of most levels makes for a rather humdrum few hours, with intriguingly designed areas too few and too far between to break up the formula. This is one of those releases in which I struggle to find anything particular wrong with it, but I’m hard pressed to point out much it does right, either. It’s just kind of okay, and that’s often the toughest sort of game to criticize. 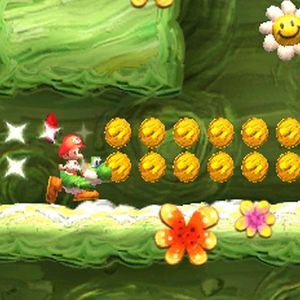 One nice attempt at breaking the monotony comes in the form of gyroscope-controlled challenge stages. In these sections, sprinkled lightly throughout the adventure, Yoshi will transform into one of several vehicles, controlled by tilting the 3DS system left or right. These vehicles also come with a single one-button action, too. For instance, the hot air balloon hovers, while the submarine shoots a torpedo. These short courses offer many bonus coins, and can be quite inventive, but like many of this title’s nicer ideas, there’s just enough to keep one satisfied.

I can’t say I am a fan of the art style much, either. While I respect the attempt to make New Island look like a brightly colored painting, complete with splotchy textures and scribbled backgrounds, the result on the small 3DS screen is messy, making characters appear more jagged and unappealing than they perhaps would on a larger, high definition television. In theory, I enjoy the style a lot, but in practice, a handheld system may be the wrong place to attempt it. The music, at least, is very pleasant to listen to, and can provide a few ear worm tunes, while Yoshi’s mawkish voice effects are interminably adorable.

Yoshi’s New Island is by no means a bad game. It’s pleasant enough, for the most part, and children are likely to find it very enjoyable indeed. Those who wanted something closer to the spirit of the original titles are going to be disappointed by most of what this one offers up, however, as those trickier elements are offered up late in the game, with a lot of tepid platforming barring the way.

Bottom Line: Yoshi’s New Island is a solid little platformer, but it struggles to be much more than that. It will, at least, kill a few hours of time, even if that time will hardly be remembered afterwards.

Recommendation: You won’t ruin your life by picking it up, nor will you if you don’t.