A building strategy game similar to The Settlers or Cultures—Valhalla Hills is about three things: leading, surviving and fighting. A set of outcast Viking Heroes are tasked with reaching the top of the mountain where a magical portal awaits them to Valhalla. The journey is long and treacherous and surviving the harsh conditions ahead is the only way you will reach the peak of salvation.

Indirectly controlling a set of cute and colorful Vikings, the game starts off on a small island composed of varying mountain terrains and hazards. Portals are placed on each map to progress to the next level–which is either done by killing or appeasing enemies. You take on the role of Odin’s son Leko, who has been cast down to Earth. Odin then locks the gates behind him as punishment for not becoming the manly Viking his father groomed him to be. The game lacks a strong narrative, giving you little reason to actually care about what happens to the characters outside their name and stats. 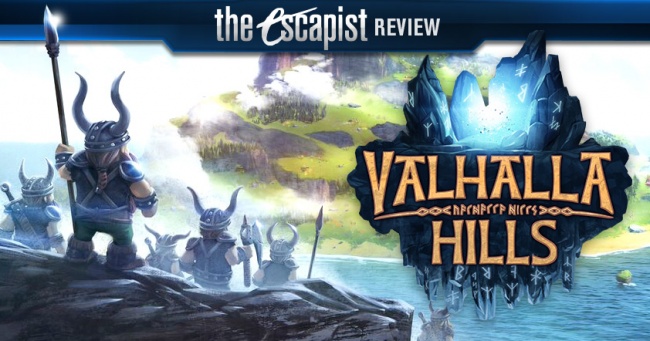 Building a Viking army is not all it’s cracked out to be, especially with their huge appetites — these guys love to eat and drink beer. Valhalla Hills is all about gathering resources and constantly moving things down the production line to create a community where your Vikings can survive. The two main strategies to reach the portal require either a sacrifice or an army to make it past the monsters that guard the gateway to the gods. Valhalla Hills is visually striking, resembling something out of a Norse fairy tale with a Scandinavian soundtrack to create the perfect ambiance for engaging gameplay.

The strategy for creating a successful settlement requires optimizing the movement between your Vikings and buildings. Early in the game you will mostly look for new resources and food supplies to keep your Vikings in pristine health while building basic workshops and tools. Whether building barracks or temples both strategies require a strong and stable economy. You can start out in the campaign mode, where everything is slowly introduced over expanding maps, or unlock it all right away with open mode.

On the first island, your town starts out by building a basic woodcutters hut and huts for your vikings to sleep in. The portal is unguarded and progressing to the next level is fairly simple. Once you reach the next island, you learn that the portal is now guarded by monsters requiring either a sacrifice or an army to take them out. The needs of your vikings increasing substantially requiring you to build fisheries and hunters huts. Building roads to create direct and quicker movement for your Vikings between the war camp and weapon smith is just one of the many concepts to create a booming economy.

Creating an effective town in Valhalla Hills can often be taxing since Vikings become easily distracted by the smallest things (such as gossiping with passing Vikings) and often take the longest possible route to their destination. Again, this is why it is critical to create direct paths between your buildings in your supply chain or you will have Vikings going anywhere but where they need to be. Despite this, it’s quite entertaining to watch the awkwardly moving Vikings make their way around the map, occasionally stopping to chat or complete a task.

At times you will notice the differing personalities that some of the Vikings have. Some are hardworking and diligently work to complete their tasks while others can’t seem to focus long enough to finish anything. Since you can’t directly control these little guys it is essential that you create productive paths for the unpredictable AI to follow with the strategic placement of buildings for each supply chain.

I had a very enjoyable experience building towns early on, but it became quite the challenge as the game progressed. As the terrain changed with each new island, building costs substantially increased alongside the challenge of creating decent placement of buildings to remain effective.

The randomly generated maps in Valhalla Hills help to maintain a sense of variety as you progress to larger areas where few things change outside the difficulty factors. The various terrain of each map will have areas that you can not build in and will require you to prioritize certain resources over others. As the maps grow more expansive and chaotic, it gets harder and harder to unlock and build which definitely keeps you on your toes.

Bottom Line: While Valhalla Hills doesn’t have the presentation and energy of some of the more popular RTS games, it does manage to offer up an addictive experience that is a lot of fun. Listening to the intriguing sound effects of the Vikings mustering up their strength to work remains delightful and humorous throughout the entire game.

Recommendation: Valhalla Hills is a solid strategy game that anyone who has ever played The Settlers will enjoy.