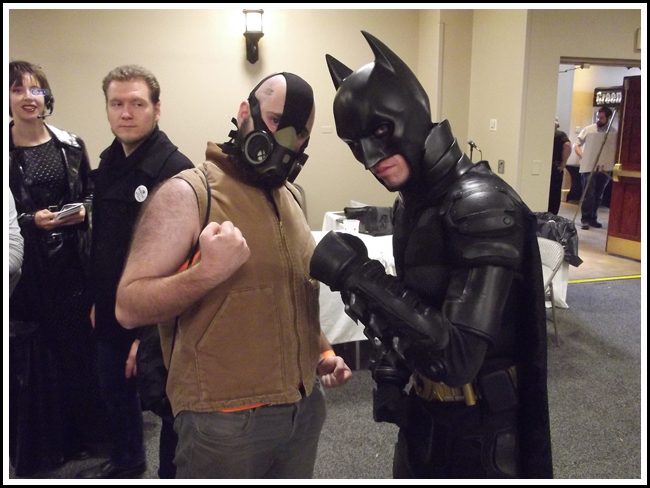 Comic Con came to Vermont last month and The Escapist was there to see the sight and take pictures of the Green Mountain State’s cosplayer in action.

Last month the state of Vermont got to add another notch to its geek belt thanks to the success of its very first Comic Con. While a family trip sadly kept me away from the convention’s Saturday debut (stupid family that loves and wants to spend time with me), I had the pleasure of dropping in the day to peruse the sights and sounds of the Green Mountain state’s gathered geekdom. While it obviously wasn’t the largest cons (there’s only 625,000 people in the entire state), it showcased local artists, talents and vendors that I had previously had no idea about.

As with any good convention, of course, it also had its fair share of cosplayers. There weren’t the heaping oodles that I’ve seen at some larger events, but Vermont’s costume community still did a fine job of filling the floor with fictional characters brought to life.

First up is a nicely done duo recreating The Dark Knight Rises’ Batman and Bane. 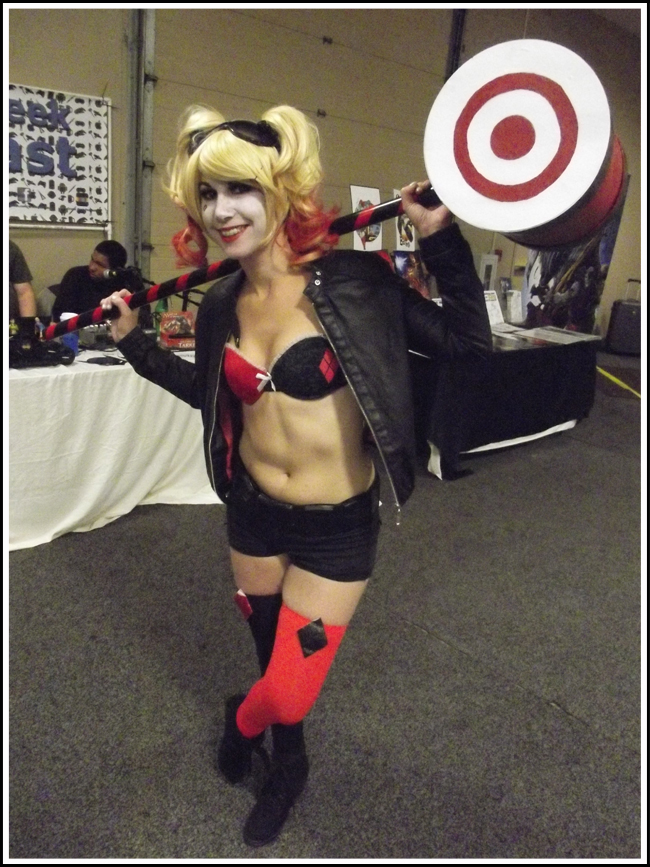 As much as I enjoyed the brought-to-life versions of the Caped Crusader and his oddly voiced nemesis however, I have to say that this Harley Quinn definitely won top prize for enthusiasm and, above all else, patience. It took me a solid two minutes of fumbling with my camera before I managed to catch any good shots of her. Whereas someone else might have cracked and hit me with the hammer, she remained smiling and good nature the whole time. 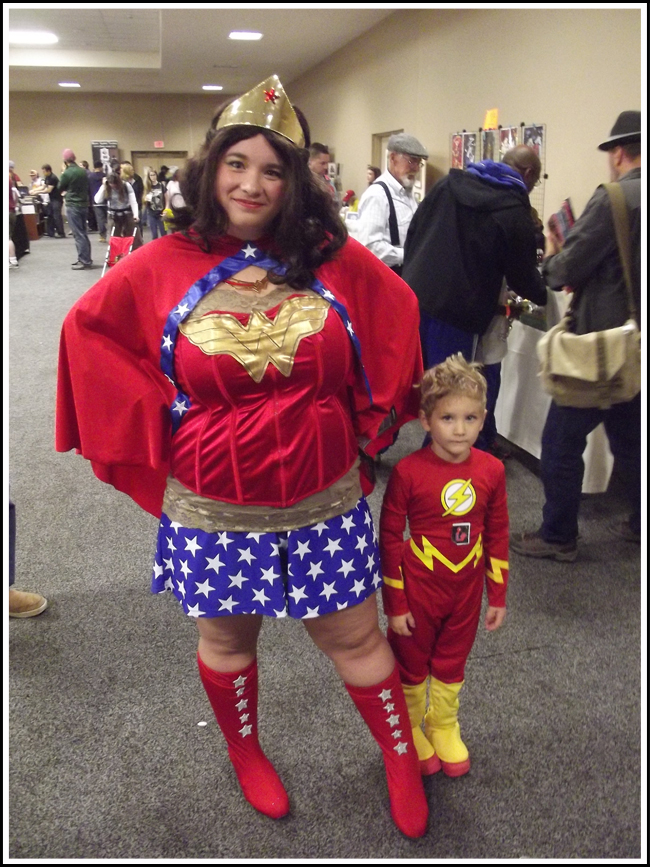 Slightly less good-natured was the mini-Flash in this picture who looked at me like I was made of recycled Slender Man parts and required some serious coaxing from Wonder Woman (aka: Mom) before he’d join in the shot. He at least did better than his sister who came dressed as Batgirl but decided to stand off to the side with her Dad after giving me an equally apprehensive look. You’d think I was the Joker knocking on her door with a diabolical plan to drive Commissioner Gordon insane. 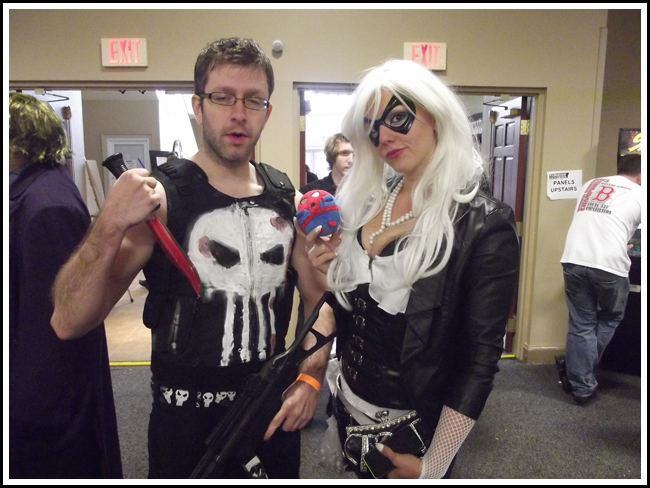 Not everyone came dressed as a DC Universe character, the show delivered some equally solid entries from the Marvel camp. The Punisher, for instance, was well-represented by this cosplayer who I found strutting around the show floor with the confidence of a genuine anti-heroes. Granted, he’s walking around with a Black Cat, which kind of dilutes the Marvel-ness of the picture, but we won’t hold that against him. 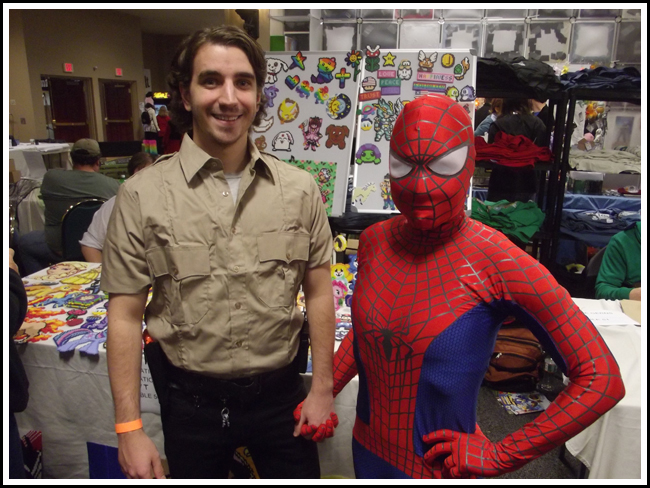 I also got to chance to meet up with another cross publisher comic team up: Rick Grimes and Spider-Woman. I’d say that Mr. Grimes was a tad less threatening than the Punisher. That being the case, it kind of worked. After all, when The Walking Dead begins, Rick is very much your Officer Friendly type. It’s not until later on when he’s all beaten up and jaded that he becomes the murderous, zombie brutalizing leader that longtime readers know and love. 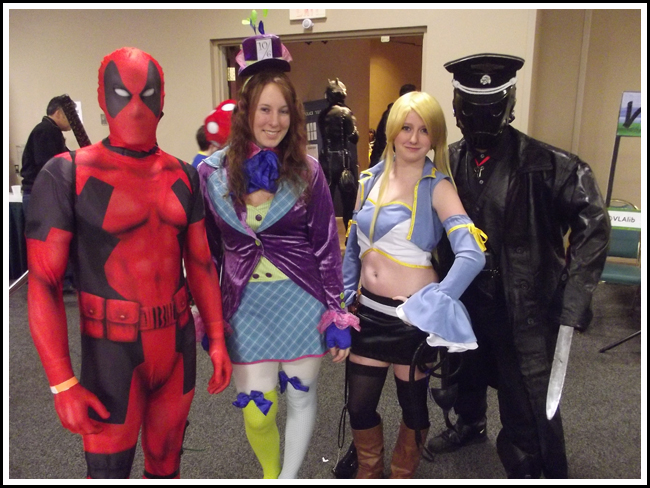 Continuing with multi-franchise crossovers, this group pulled from comics, film and anime to create a smorgusbord of character including Deadpool, Karl Ruprecht Kroenen from Hellboy, the Mad Hatter from Alice in Wonderland and Lucy from Fairy Tale. 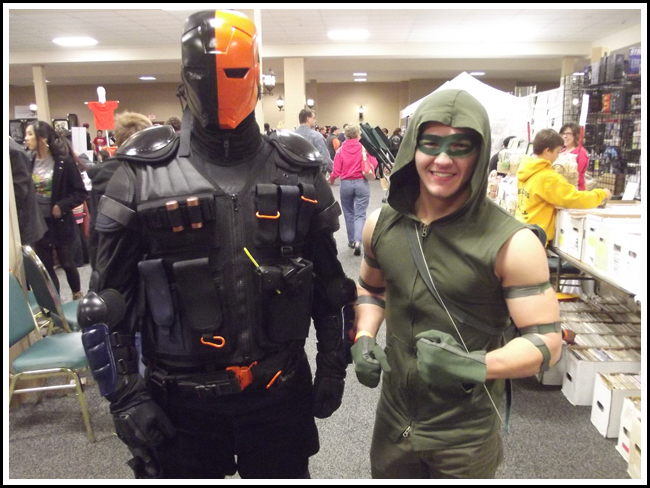 These two were actually the first people I tried to photograph while visiting Comic-Con. I say tried because when I pulled out my wife’s camera I initially couldn’t it turn on. After a minute of panicked with its various switches and buttons I finally just gave up and let the poor cosplayers go. A little while later I decided to check the camera’s batteries. After recharging them at home I’d put them in upside down. I tracked down Deathstroke and Arrow and, after mutually chuckling about my professional incompetence, we gave the pictures another try. 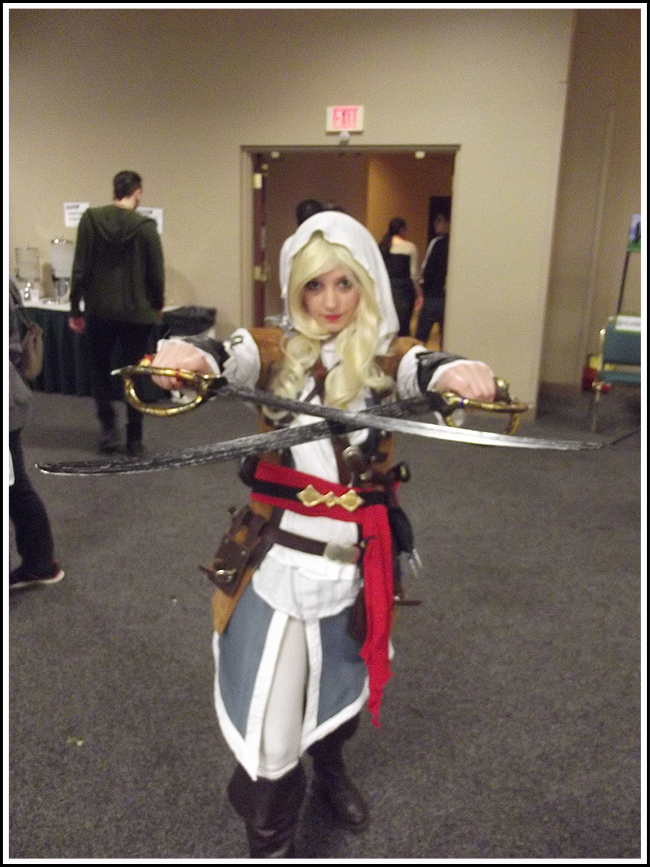 There were no such problem with this Assassin’s Creed: Black Flag cosplayer who happily drew her swords for a few poses. Rather, there was the issue of my big sausage thumb poking over the edge of half the pictures I took. In case you hadn’t figure out, I’m not the best photographer. 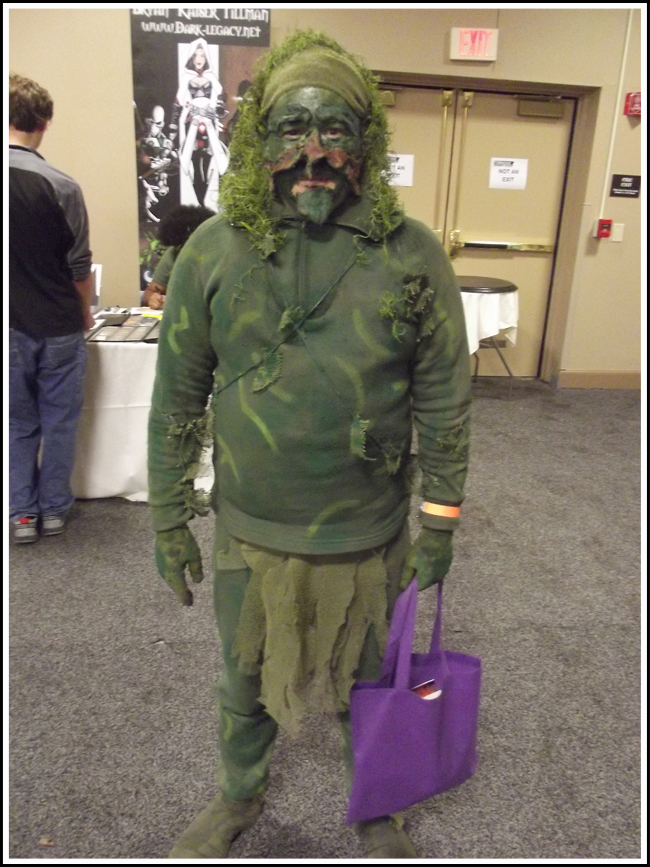 Whatever issues I might have had taking pictures, one problem I generally didn’t have was figuring out who everyone was supposed to be. This guy meanwhile had me boggled for a bit. Mind you, I’d never criticize him or the work he put into cosplay; he was very friendly and I give him credit just for having the guts to show up wearing something. That said, it definitely took me a few minutes of looking at his picture to come to any sort of solid conclusion as to identity of his source character (Swamp Thing?). 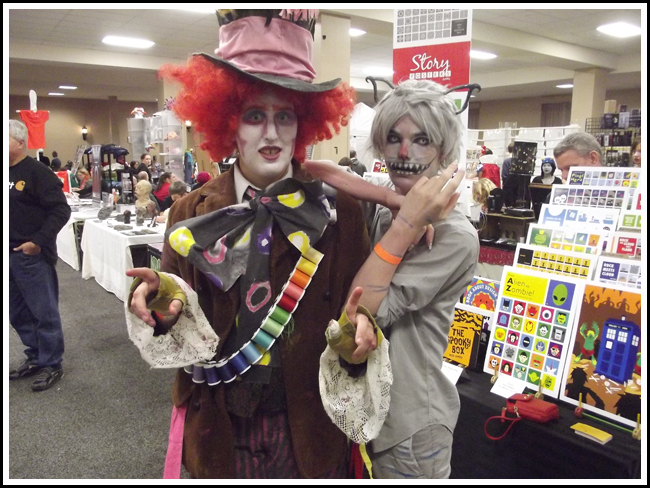 Then there are characters where you have no trouble identifying them. I’ve never seen the 2010 Alice in Wonderland nor did I pay it much in the way of serious attention. That said, when I saw this hatted and red-haired individual walking toward me there was no question as to what I was looking at. I mean, what the hell else could it be? Far from being mad though, this particular Hatter (and the Chesire Cat) were both happy to take a few photos. 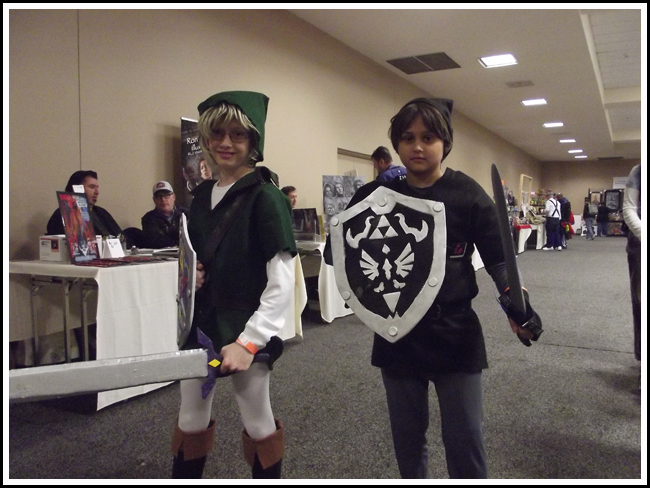 Last but certainly not least, I ran into a light and dark Link duo that I, being something of a Zelda fan simply had to get a shot of. Not unexpectedly, the kiddos behind these costumes were excited to get their pictures. The woman escorting them meanwhile, did a good job of impressing in me just how important is that I start carrying some business card while covering conventions. As uncomfortable as her grilling made me, I have to give her credit for watching out for her kids and going to the extra mile to make sure I wasn’t just some creeper who’d stolen a press badge.

You Shall Not Pass! …This Strange Science Pic Quiz