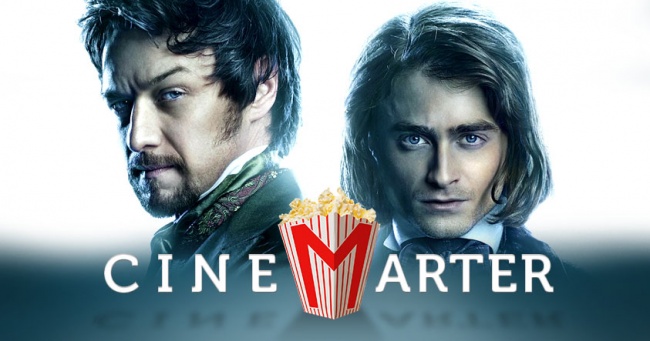 “You know this story.” These are the first few words that are said in Victor Frankenstein, and it’s a moment before anything follows. They get repeated later on in the film, too. Only a supremely confident movie – one that believes that it’s telling a story we most certainly do not know – would make this sort of statement. And it does it twice! But confidence and arrogance are often confused, and I’m afraid that Victor Frankenstein is more the latter than the former. “You know this story” isn’t an ironic statement, nor is it one that the film even attempts to circumvent. As soon as you hear it, it would be a more efficient use of your time to stop watching and do something else for a couple of hours. You do know this story.

For a while, it looks as though Victor Frankenstein will successfully change things around enough to keep itself interesting. It starts off with a no-name hunchback (Daniel Radcliffe) working in a circus, only to see its trapeze artist (Jessica Brown Findlay) fall and break her collarbone. With the help of a spectator, whom we later learn is the eponymous character (James McAvoy), the hunchback sets her bone and saves her life. Frankenstein later frees the hunchback, fixes his back, gives him a fake identity (“Igor”), and the two begin to work on reanimating various body parts until eventually trying to create an entire functional human being out of non-living parts. 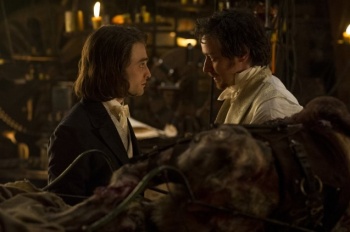 Along the way, Igor pursues the trapeze artist, who also is granted an escape from the circus, and a religious police inspector (Andrew Scott) goes well out of his way in an attempt to stop Frankenstein and Igor’s experiments. Why? Because it’s an affront to God. The film attempts to moralize the experiments, presenting both opinions before eventually settling somewhere in the safety of the middle, so as to not offend anyone. How dare the movie have the gall to pick a side in the science vs. religion debate? It’s only 2015, after all.

A plot we’ve seen before wouldn’t be too much of a problem if Victor Frankenstein had something else going for it, but its plot is only where it begins to have trouble. So much of the film relies on James McAvoy and Daniel Radcliffe and their chemistry together but forgets to give them much to do. McAvoy seems like he exists in his own headspace, Radcliffe is far too often too timid to do much on his own, and the two actors seem to be competing for who can care less about the project. McAvoy is just channeling Robert Downey, Jr., and Radcliffe is … well, he’s just doing as much as he can, which sadly isn’t much. His one attempt at acting in the film comes from him having to hobble around like a hunchback, and that gets fixed 10 minutes in.

Someone should have given this movie both a brain and a heart; as of right now, it feels like a corpse brought to life just to suck the joy out of the ring and steal money from your pockets.

I mention Downey, Jr., because Victor Frankenstein‘s visual aesthetic seems to have been ripped from Guy Ritchie‘s Sherlock Holmes films. Granted, the visuals were about the only things from those movies that you’d want to steal, but shouldn’t the bar be aimed a bit higher? It only feels like that in moments spent outside, anyway, as some pretty decent special effects have recreated England of the 1800s. But most of the film takes place in dark, bland rooms. So, instead of copying Guy Ritchie, director Paul McGuigan copies watching paint dry.

If you’re hoping that the action scenes can save the film, you’re going to be very disappointed. There are maybe two action scenes in the film – if you’re generous and include the climax as an “action scene” – and they’re riddled with slow motion, choppy editing, and cinematography that ensures you only have a slight idea of what’s going on. It doesn’t help that they both – ha, I almost wrote “all” – take place at night. The film is so bereft of action that it attempts to turn a dance sequence into an action scene by throwing in unnecessary slow motion like it’s a Zack Snyder movie all of a sudden – except it’s not anywhere close to that good.

Victor Frankenstein can’t even decide what movie it wants to be. It at times wants to be serious – its moral debates, and Frankenstein’s history (including daddy issues!) – but for a majority its tone is rather light, in large part to McAvoy hamming it up the extreme. But then a scene will come when it tries to be scary, before whiplashing us to a purely comedic scene. It was either so poorly written and directed that it can’t keep a straight tone, or it’s been hacked together in the editing room. We’ll likely never know which is the case, but have it noted that it finished filming in March of 2014, and it’s been released in November of 2015 after a couple of delays.

So, what we have with Victor Frankenstein is a movie whose perspective is not even from the character whose name is in the title, that tells a story with which you are already familiar – or one you can easily figure out, as its screenplay tries nothing new – doesn’t know if it wants to be serious or dramatic, scary or comedic, and is led by actors who quite clearly lost interest in even trying to be good 20 minutes into the film. It does have some pretty visuals – visuals that look ripped from Guy Ritchie’s Sherlock Holmes movies. Someone should have given this movie both a brain and a heart; as of right now, it feels like a corpse brought to life just to suck the joy out of the ring and steal money from your pockets.

Bottom Line: One of the worst movies to ever bear the name “Frankenstein,” Victor Frankenstein is a lifeless movie that wishes it could approach mediocrity.