Disclaimer: All VR hardware (Oculus Rift and HTC VIVE) was provided to The Escapist by the respective producers.

I’ve had the “Is Virtual Reality Going to Take Off?” conversation well over a dozen times now. My opinions on the matter have definitely changed over the last few months, as I heard more people talk about it, and had more time to experience it for myself. One thing I’ve always maintained is that VR will be something. I wasn’t convinced it would be a mass market, and I never expected headset sales to compare to console sales, but it was hard to imagine this level of science-fiction technology just disappearing. 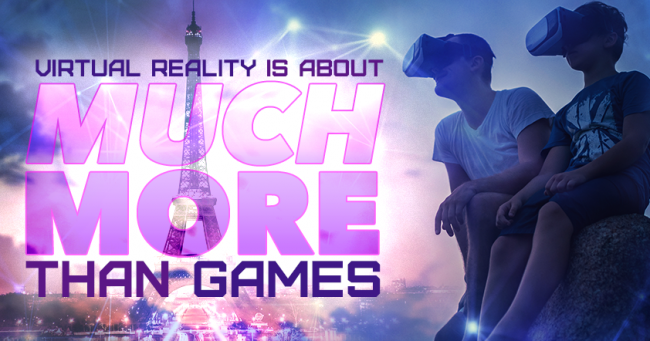 I’m sure most of you remember Microsoft’s ill-fated “All-in-One” marketing effort for the Xbox One. VR is having quite the opposite problem. Instead of promoting VR as something that does a lot of things, VR often markets itself primarily as a video game platform, which drastically limits its influence and exposure to non-gaming markets.

Once I managed to stop thinking about VR in terms of video games – VR isn’t just about video games, any more than the next generation of CPU is. – many of the myriad problems stopped being deal-breakers. An educational VR experience, teaching you about different chemical reactions, for example, wouldn’t have much need for functional navigation and movement. A bride in Europe trying on a wedding dress at a boutique in New York wouldn’t need a millisecond response time to trigger inputs. Peering through the lens of the Hubble Telescope into the star-speckled vastness and cosmic lethargy of space, 90fps rendering is a bit of a moot point.

We often forget just how difficult games are to make. Standardization has helped, and the engines that power most games these days – including, but not limited to Unreal, Unity, and CryEngine – have been iterated on for years, polishing the core systems to a brilliant shine. VR doesn’t have that yet, and it’s going to take a lot of time before we start seeing video games of the caliber we’ve come to expect on traditional platforms. To be sure, I expect that video games will absolutely be a big component of the VR industry, it’s just vital that we look at it as such; a piece of a much larger puzzle.

VR is about experiences, much like video games. You can experience the post-apocalypse in an open-world adventure game, like Fallout. Or you can experience a demon-slaughtering escapade in DOOM. Or, perhaps you could experience the collapse of a star, and the ensuing supernova, in real time, based on our most accurate models based on observing the real universe. Games have become extraordinarily realistic in the past several years, and they’re only getting more so. It’s only a matter of time before we start to struggle to even discern what’s real from what’s been rendered. At that point, the question becomes, “Does it matter?”

Avoid overthinking the existential philosophy of the question, and just consider, if you were in a virtual world that was indistinguishable from the real world, would your visit to the Eiffel Tower be less enjoyable? Would you rather walk around the pyramids in real life, or walk on top of the pyramids in a real-seeming virtual world? Surgeons already perform operations controlling tiny tools through a computer interface, with their only vision being digitally passed through from a camera inside the patient. It’s a way off, sure, but in time, that surgeon may be able to perform that operation from the other side of the globe with exactly the same precision.

VR may very well change the world in profound ways, we just have to hope that the applications beyond video games will incentivize the investment of thousands of hours of development time to polish the experiences to the necessary sheen. Let’s face it; well-designed video game interfaces are simply superior to virtually any other UI, anywhere. The very foundation of any video game is the user experience. The interface and user experience of VR will eventually determine whether it can serve as a viable replacement for real-world experiences.

When VR does change the world, you can thank a gamer.

Join Us for a 24-Hour Marathon Charity Stream This Weekend

8 Ralph Wiggum Quotes For Any Occasion