Disclosure: Oculus hardware has been provided to The Escapist by Oculus.

Oculus sent me a rig a couple weeks before PAX this year, and I spent a bit of time tinkering with it, even if I haven’t had a chance to really dive into the deep end. After what I saw at PAX, though, I’m far more excited about the prospects of VR, and I’ll definitely be doing more with it on the site in the coming weeks and months. It will be noted on future content, but, per the above disclosure, our VR coverage will be limited to Oculus for now, who provided us with hardware for use in covering both games and hardware, at least until I get my hands on a VIVE.

With that out of the way, let’s get virtual!

I only saw two things in VR at PAX this year, but that was enough to convince me that there is absolutely a place for VR in the grander interactive media market. I’ve seen dozens of demos over the past couple years, but only a couple of games, though even the “real” games tended to feel a bit light. EVE: Valkyrie is an exception that immediately comes to mind, and there certainly are others, but they’re a distinct minority. We’re seeing more and more games that feel more like games, but what I saw at PAX was something else entirely.

The American Dream from Samurai Punk, the studio behind Screen Cheat, might eventually be a game, but right now, I think it represents something more important. I walked away from the 15-ish minute segment feeling more like I’d stepped off a Small World-esque ride in an episode of The Simpsons than handing off a game controller. The demo was on rails, to be sure, but the changing scenery is huge in making the experience seem deeper. It didn’t have the feel of an explorable Gotham, more a set dressing than anything, but it created a world, which is often lacking.

The modicum of gameplay in The American Dream consists of pointing your two trusty guns at things. Your job at the bagel factory demands you shoot the holes out of the bread, as one is wont to do. You clean litter off the street the same way. You’ll even drive your car with your pistols at 10 and 2. The parody, of course, is blatant and, like most things, The Simpsons did it first. What makes it special is how genuinely it emulates the sincerity and deference of Disney’s Carousel of Progress, despite being deeply satirical at its very foundation. Samurai Punk might not be American, but they’ve got our number.

To follow that up, I saw VREAL at the company’s office in Seattle, an appointment I had scheduled reluctantly because I was not entirely certain what it was I was going to see. VREAL’s VR social hub, however, was just the sort of proof of concept I’ve been waiting to see for years, and I’m incredibly excited to see what gets built on the foundation.

The internet has more or less always been a social tool. Sure, it’s great for research and the like, but message boards and IRC back in the day, and Reddit, Facebook, and Twitter more recently, play a crucial role in keeping people connected, not just to the internet, but to other people online. This is in direct opposition to the isolation of most VR experiences, which was a huge reason I’ve been skeptical of VR as a mass-market platform. VR has always been about shutting the real world out, but VREAL wants to bring it into your headset. 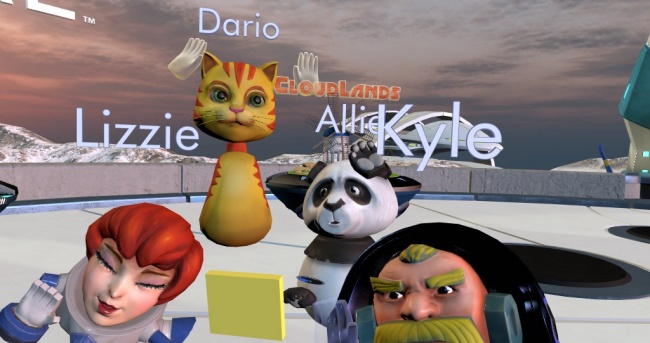 The hub of VREAL is a courtyard where you can invite others in VR to join you, represented by one of a handful of cartoony avatars – there’s still no way to port yourself into a virtual world, I’m afraid. VR viewers have the best seat in the house, but even the non-VR viewers will get something. One of the basic functions of VREAL is to set up a camera in the world. You can position the camera however and wherever you want, and that will be what the 2D viewers will see. I’ve never been particularly fond of any of the 2D views of VR I’ve seen, and I expect the number of flat-screen viewers to be higher than in-world viewers, so this has a lot of value.

Within the hub, you’ll pick your game and load into the game’s world. Your VR viewers can follow you in, and watch your game from different points of view within the game world itself. You’ll have your camera set up as well, and you’ve got a show. The biggest limitations right now, however, are the game options and audience. There’s not much of an existing market for VR streaming, with fewer than 100 viewers across all VR streams on Twitch at time of writing. VR’s seeing sufficient adoption among developers to expect the options to broaden their appeal to streaming audiences.

VREAL is a proof of concept, and it seems to bank on a flourishing VR ecosystem in both development and audience. I can imagine a group of friends hopping into The American Dream together, like a virtual theme park. They could even create 40-minute queues for the rides for authenticity!