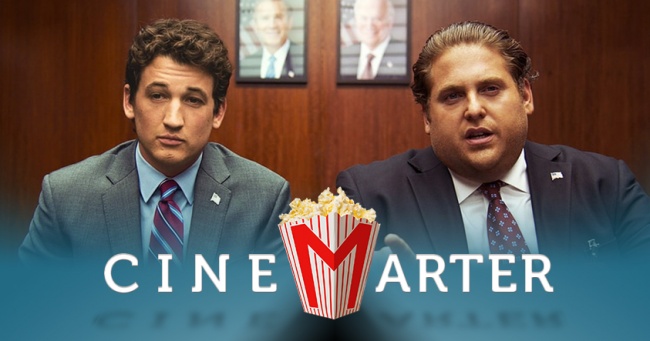 War Dogs is an evolution for director Todd Phillips. The man who is best known for the Hangover trilogy has now gone from making unfunny dudebro comedies to an unfunny dudebro dramedy. That is to say: he’s finally made a mediocre movie. Maybe if we get him to take his subject matter seriously for once we might actually get a good movie out of it. He takes War Dogs‘ subject matter – international arms dealing – about as seriously as I take Todd Phillips: Not. At. All.

The film stars Miles Teller and Jonah Hill as real-life people David Packouz and Efraim Diveroli, two people who, in their twenties, decided to get into arms dealing. To whom? Mostly the government of the United States, which puts out contracts that small businesses can bid on and then fulfill. From their office, they managed to make hundreds of thousands of dollars. When the big fish came around, of course they had to go after it. Greed begets greed, after all. Haven’t you seen enough rise-and-fall narratives to know that? War Dogs constantly quotes Scarface, so maybe you’d hope they’d know it, too.

Our movie is based on a book, Arms and the Dudes, written by Guy Lawson, which detailed their story. That’s been taken and heavily fictionalized to give us the movie. Some people get mad when a movie does that. Cite the case of a perfectly accurate-to-life biopic. Real life doesn’t usually adapt well to film, unless you’re making a documentary – and even then, sometimes not. Then again, I get the feeling that a documentary about the lives of Packouz and Diveroli would be more interesting than what we get with War Dogs.

For instance, we might get some insight into these people and the system under which they worked for a few years. Efraim is portrayed as a guy who says whatever he can to get people to do what he wants. David is also a liar, but claims he only lies to protect individuals close to him – like his wife, Iz (Ana de Armas). They’re greedy, insufferable, and they do a lot of drugs. Beyond greed, their motivations are limited. Maybe that’s how they were in real life. But if you’re going to fictionalize a lot of the events, maybe fabricate some depth while you’re at it.

War Dogs was Todd Phillips’ opportunity to prove that he can make a movie that’s worthwhile and about something. He failed.

But Todd Phillips isn’t the type of director who wants to explore people or investigate issues. He caters to an audience, keeps things light, and hopes we’re having as much fun as the main characters. There’s no bite, pardon the pun. Evidently – judging by the success of many of his movies – there’s an audience for that. But if you’re hoping for this to be another Wolf of Wall Street, Pain & Gain, or even Lord of War, you’re going to be very disappointed. Temper your expectations.

Beyond the lack of insight, my main issue with War Dogs is that it’s formulaic and bland. It takes the baseline rags-to-riches-to-rags storyline and rarely deviates. It hits the notes it needs to get a C- to take home and avoid the mental (or physical, depending on the household) anguish that a failing grade might have caused. It’s the stoner who sits in the back of the class and just wants to get all of this boring stuff over with so it can go party with its friends afterward. But the boring stuff is what makes it a compelling film and, without it, we’ve just got a stereotype that’s easy to overlook and difficult to remember.

Miles Teller narrates and serves as the protagonist. Teller can turn in a good performance when motivated, but comes across as very unlikable if he isn’t. Here, he’s supposed to serve as the “good” one of the two men, as well as give the film some heart, and can’t effectively do either. It’s not all on him – the screenplay does him no favors – but he isn’t great, either. Jonah Hill works better as the “bad” one, because War Dogs revels in that filth. Ana de Armas gets little to do as the wife; she spends most of the film getting mad at her husband for lying and then forgiving him by the next scene we see her – rinse and repeat. Bradley Cooper shows up for a few scenes because we needed a reason for things to turn out the way they ultimately do, and probably because he’s become friends with Phillips. (Cooper was also given a production credit.)

War Dogs was Todd Phillips’ opportunity to prove that he can make a movie that’s worthwhile and about something. He failed. You’ve got potentially great subject matter that’s based on actual events, and it’s been turned into a bland, formulaic, and unfunny dudebro dramedy. It’s filled with unlikable and boring individuals doing stupid things because they’re greedy. Because we’ve never seen that before. When a movie references Scarface a half-dozen times, it makes you want to watch Scarface again instead of sitting through it. War Dogs is a mediocre-at-best movie and a disappointment given the subject matter with which it had to work.

Bottom Line: War Dogs is a swing and a miss.

Recommendation: If you like Todd Phillips’ other movies, you’ll probably still have a decent time with War Dogs. And that’s fine, I guess. It’s not horrible.