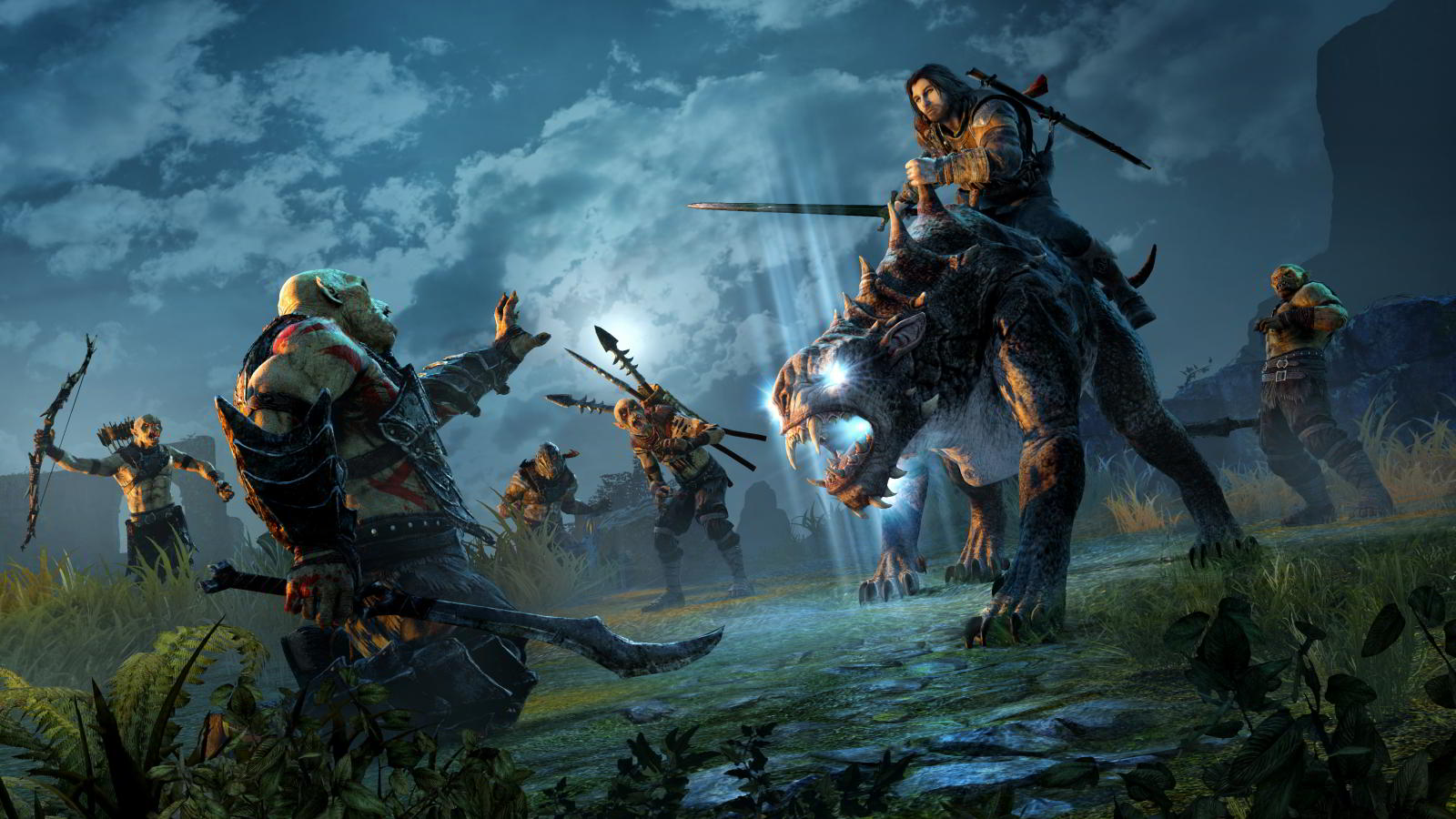 I didn’t have a good first impression of Shadow of Mordor. It just didn’t seem to be the kind of game I wanted to play in the Lord of the Rings universe. Being a Tolkien nerd – I’ve read The Silmarillion, twice – what I saw when it was announced back in November last year didn’t seem to mesh with my vision of heroic fantasy. And while Shadow of Mordor certainly paints in shades of a moral grey area, I was more taken with developer Monolith’s ability to create a game environment that changes and reacts to the player, while feeling very close to Tolkien’s ideas about evil and the orcs.

“Tolkien very much said that we were all orcs in the Great War and that was really important to our idea of who the orcs were,” said Micheal dePlater, design director at Monolith. “Orcs, not some fantasy cliché. They’re not some fairy tale thing. They really are what happen to human beings when their driving force becomes fear and hate.”

Shadow of Mordor is an action RPG set after The Hobbit and before The Lord of the Rings. The men of Gondor were supposed to be guarding Mordor, but they’ve had to pull back from a full occupation of the land once inhabited by the powerful Sauron. You play as Talion, a ranger of Gondor who falls in battle but is resurrected by a mysterious “Wraith” and bestowed with terrible powers. I get the impression the plot of the game will be concerned with figuring out exactly what’s happening, but the general concept is that the Wraith wants Talion to use the enemy’s forces against him.

dePlater rejects the idea that Tolkien wrote characters in black and white morality. There’s a lot of grey. “We definitely wanted to get away from any idea of Tolkien as being over-simplified or black and white,” he said. “There’s amazing characters with shades of grey. Boromir says ‘Only by ruthlessness that we can prevail.’ Saruman, of course, is really interesting, because, particularly in the books, his goal is to raise an army of Uruks and challenge Sauron.”

Setting aside for the moment that orcs are actually corrupted elves, not humans, dePlater makes a great point. And it made me consider the themes of the game in the lens of what Tolkien experienced in World War I and even what’s happening in the world right now. Talion is the Jack Bauer of Middle-earth. “We really wanted that idea of using terror against your enemies and being a monster to the monsters in the land of darkness definitely has something in common with Europe in the thirties,” dePlater said.

Even with all those inspirations, the choice of setting and theme could be really off-putting to some customers in its bleakness so I asked dePlater why he chose it. “We wanted somewhere that was simultaneously really iconic but also unknown,” he said. “You know from the appendices [of The Return of the King] Sauron has just returned to Mordor because he was defeated [by the White Council at Dol Goldur]. So it’s interesting to think of Sauron not just as this total, omnipotent, god-like figure. This is someone who got his ass kicked and he’s just returned, but he’s going to start building up his armies towards the War of the Ring.”

Sauron’s armies are a raucous bunch. The system on display at the pre-E3 event last week was called Nemesis. Basically, it is a simulation of the cutthroat “politics” at work in the hierarchy of orcs in the land of Mordor. The user interface shows a field of 5-by-3 orc captains, with five warchiefs set above them leading one of Sauron’s armies. You can zoom into any one of these procedurally generated characters to get a closer look – Shaka the Drunk, for example, is a slight orc with glistening skin that is never far from his flask of orc grog. If you have the right intelligence, you’ll be able to see his strengths and weaknesses, and from those perhaps devise a course of action to take him out. 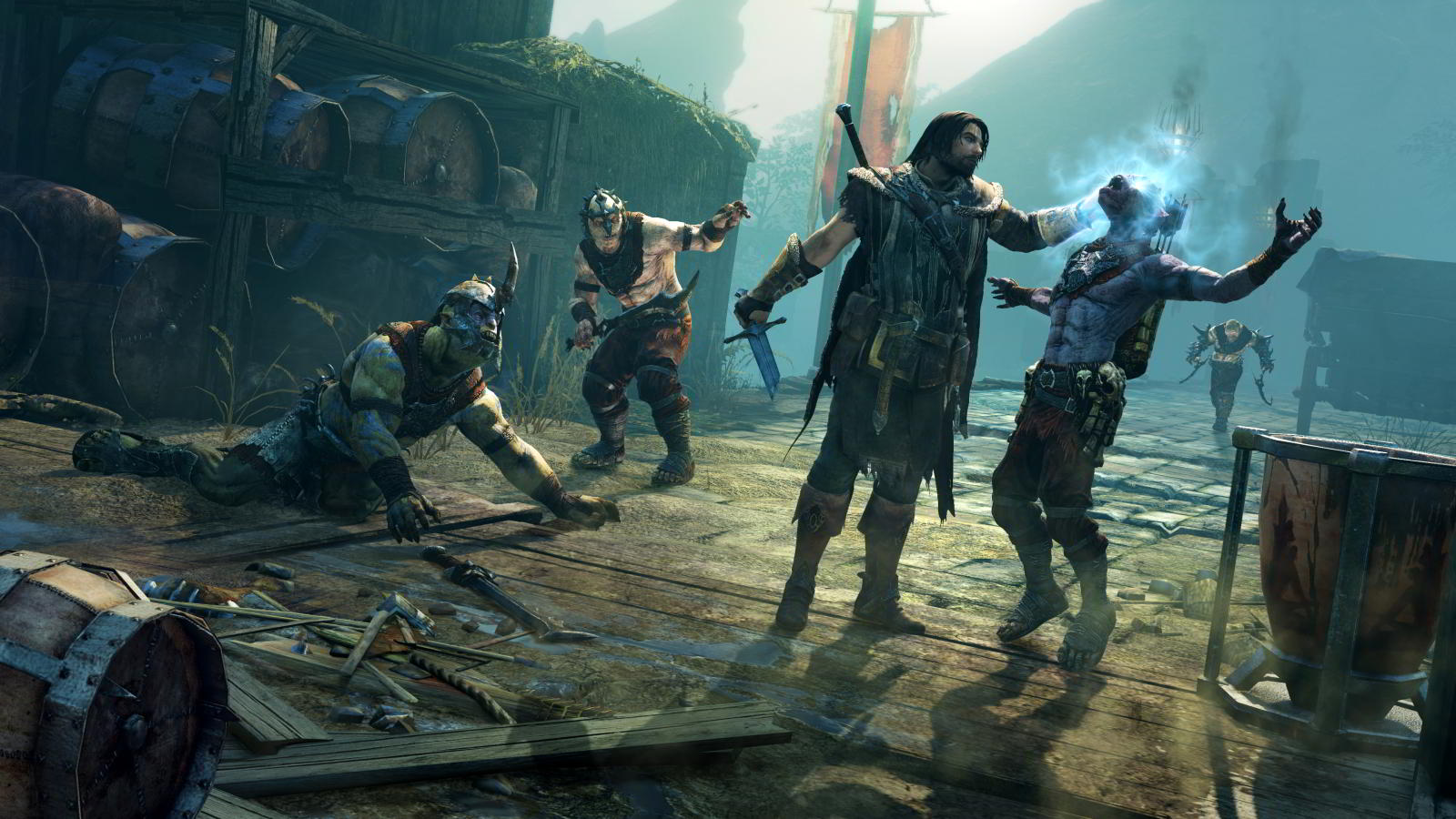 The interface alone was a thing of beauty, but the best part was that the lineup was constantly evolving and changing based on procedurally generated events. These roles aren’t static – the individual captains, lieutenants and war chiefs are constantly backstabbing and front-stabbing each other to get more power. dePlater was inspired by a few scenes in Tolkien’s books. “When Sam and Frodo are arriving in Mordor in that scene in Cirith Ungol where the orcs slaughter each other,” he mentioned as an example. “And even as Sam and Frodo go further into Mordor, there’s another scene, there’s a showdown [between orcs] and they stab each other in the back.” With those key examples, it’s clear that Shadow of Mordor is sticking with the spirit of Tolkien’s writing.

It is one thing to be presented with this Nemesis system, but another to actually play with it. Thankfully, I spent the bulk of my hands-on time with Shadow of Mordor killing orcs. The snippet of story we were given – dePlater and co. are being extremely tight-lipped about details – showed an ancient human queen called Marwen telling Talion to take over Sauron’s army near the Sea of Nurnen. The mission is to put five orcs in the position of warchief which have been branded – or controlled – by the powers of the Wraith inhabiting Talion.

Here’s where the emergent gameplay comes to the forefront. You can put branded orcs in power in several ways. You can defeat the warchief and brand him yourself, which is difficult because they are usually well-defended. You can brand one of his captains, and then orchestrate a coup whereby the branded guy takes over. Or you can just take out his captains, and go after the warchief without any protection. Once you decide what to do, you can put a mark on your target, and head out into the open world and see if the best laid plans of elves and men come true. 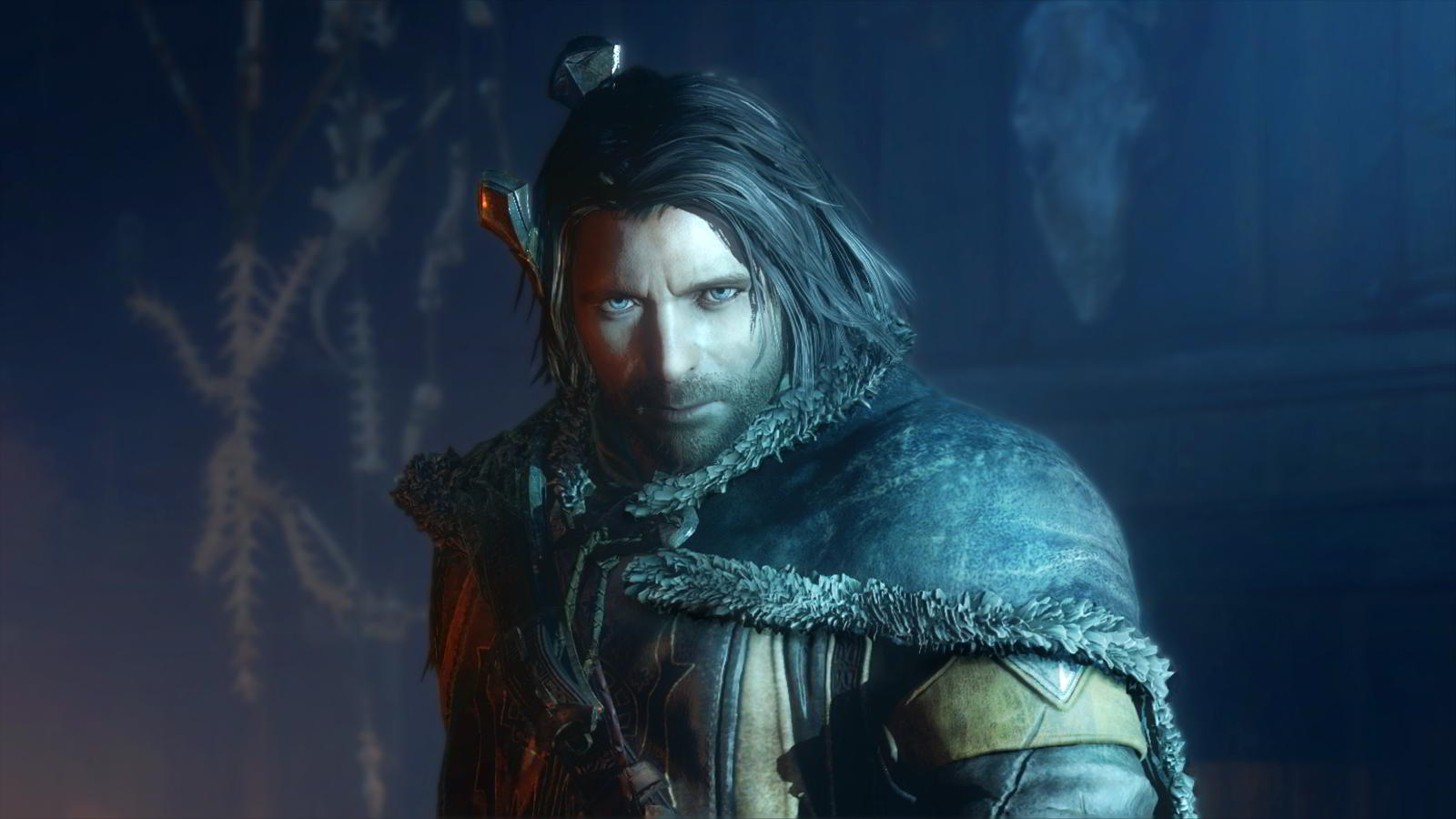 The plains around Nurnen are not the broken, jagged lands of Mordor you’d expect – the green fertile lands surrounding the freshwater lake are where the bulk of food is grown to feed the swelling forces of Sauron. The orcs here are slavers, forcing humans to do the dirty work of growing and harvesting crops. There’s also new wildlife, such as the “caragor” which is the evilized version of a lion as a warg is to a wolf in Tolkien’s lore. You can ride caragors around the world and into battle – some of the orcs have strengths with mounted creatures or are weak against their attacks.

The world is dotted with orc fortress and other ruins which Talion can maneuver around and climb over very easily. Here’s where the comparison with games like Assassin’s Creed are the most apt, but the action honestly feels very different when controlling Talion. For one, you can leap from any height and not take damage – no more searching for hay stacks.

Combat with Talion’s two blades is quite fluid, and countering orc attacks is important but you can’t just wait around for the counter symbol to float above their head. It’s easy to overwhelmed with a huge number of enemies, and you’ll have to use Talion’s wraith abilities to quickly dash to avoid clumping. In truth, there were a lot of abilities mapped all over the PS4 controller I was using and I didn’t have enough time to master them all. I died quite a bit aiming with my bow, when I should have been fighting in melee.

But here’s the cool thing: When you die, there’s a quick sequence which shows orc captains killing others, and power shifting all over the place. New grunts are elevated – with a strong chance it was the guy who killed you that’s promoted – and duels between orcs with a grudge will be completed with all manner of blood, gore and flying, decapitated heads. All of a sudden, the power landscape you saw in the Nemesis interface has changed, and you need to roll with it to continue furthering your goals.

As I struggled to get one of “my” orcs installed in power, I was struck by how much I was having fun within just one mission in the game. How does this system integrate with the rest of the story? dePlater didn’t reveal much, but he did hint that Talion would meet characters that “bring some humanity” to the story, as well as important lore characters such as Gollum who is in Mordor around this time. Christian Cantamessa is a writer on the project, and he recently was on Red Dead Redemption and dePlater hopes he brings that gravitas to this game. “That’s another game that’s really interesting obviously in exploring similar themes of modernity and morality,” he said. “[Mordor] is kind of a frontier too.

The one big thing I tried to get him reveal was who the Wraith was who inhabits and empowers Talion. “There’s a lot of fantastic speculation on that,” dePlater said with a smile. “He’s someone very authentic to the lore who has a very strong grudge against Sauron.” The art-style of the Wraith animations, as well as the towers you respawn after dying in the world, both evoke an Elven feel to them. dePlater also said there’s a connection with the Rings of Power. If I’m going to take a guess, I think the Wraith is actually Celebrimbor – the Noldorin who taught Sauron how to make the Rings in Eregion beside Moria. But that’s pure nerd speculation …

Back to the game at hand, I really enjoyed how choosing to take out a captain or a lieutenant could then spawn a whole other set of circumstances to contend with. As I was crawling into an orc stronghold, I noticed a nest of insects hanging from a tree branch. Wait, wasn’t Rash the Mountain susceptible to insect stings? I called up the Nemesis interface, and yep confirmed. I maneuvered Talion to be near the nest, using stealth and the brush to stay hidden, lured Rash over with an arrow, then shot the nest above me. The hive came crashing down, and Rash was beset by fantasy-themed hornets. He took a lot of damage, so he started to retreat. Hold on, I need to brand you with my wraith powers! For the next few minutes, a hilarious chase scene unfolded as I tried to weave around Rash’s grunts to keep their fleeing commander in my sights. By the time I got to him, branded him and made Rash mine, I realized I had engaged in a whole string of incidents the designers never really designed.

“Without nerding out too much, pen and paper RPGs were another huge inspiration for this system,” dePlater admitted. “The most memorable characters you’ll ever encounter in an RPG aren’t the scripted ones that placed in the story. They’re the recurring villain that gets created by the DM, who started out as no one, and that you build your own story around. So, that sort of pen and paper RPG story-telling was really a big inspiration for what we wanted to do. It almost is like a dynamic DM, basically.”