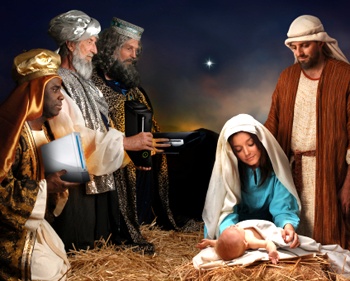 We three kings of Gaming are
With Blu-Ray, waggle and avatars.
Xbox and Wii, DS and PS3
Following gaming’s star

O games of wonder, games of might
Games with dazzling features bright
Wii is leading, PS3 needing
Is 360 finally getting it right?

Let us recite a tale of the videogames industry. The three kings of the industry – the consumer, the media, and the creator – followed the star blazed by Sony, Microsoft and Nintendo, and brought with them three gifts for gaming. Three gifts that the industry desperately needed, exactly what they needed this holiday…

The First Gift: Peace on Earth, Goodwill Toward Men

With all three consoles of this generation finally in full flight this year, the always-stupid and never-ending console wars have kicked off for real, annoying innocent readers of any game-related website that allows comments. It’s funny to see the same arguments that I once heard on the playground, concerning machines that have long since rusted, still be repeated on the internet about the latest hardware – but at least the machines that I argued about on the playground had games that were completely different from one another. In this day and age, when the platform exclusive is all but dead, arguing the merits of a PS3 against a 360 seems like an exercise in futility.

Of course, this is not something that is unique to gaming. You can see it in PC vs Mac arguments, Windows vs Linux, or the late HD-DVD vs Blu-Ray debate. It’s an ugly gang mentality that is only exacerbated by the anonymity and ubiquity of the internet. But in gaming, in the absence of any higher-level discussion (The Escapist excepted, of course), these voices drown out every issue there is to be had.

This year we saw these tedious arguments spill over into Metacritic, where entries for Gears of War 2 and Little Big Planet were vandalized by fanboys. Amazon.com was spammed by internet campaigners up-in-arms about EA’s DRM methods – a valid issue for discussion, but one that is only ever going to affect a handful of customers. From the retail near-monopoly that dominates the industry to the increasingly lax quality control for both hardware and software, there are far more important issues that directly affect the games all of us play, but which are all but ignored in the scramble to criticize one anonymous corporate entity and defend another.

Now, I know none of this is not going to happen but humor me – it’s Christmas. The greatest gift that the customer could bring to the games industry is to put aside petty loyalty and to think. Don’t choose hardware based on a misguided brand loyalty. Stop buying into ridiculous schemes like paid themes and DLC microtransactions. Support new IP, stop encouraging publishers to put out ’09 updates of every flagship, and reward innovation. They say that the customer is king, and this is nowhere truer than gaming – and for better or worse, this king of the industry will always get what they deserve.

Despite the near-collapse of the print industry, the games media have never been afforded such a position of power – they are the opinion formers and kingmakers, decreeing which titles become successes and which are left by the wayside. With the rise of collators like Metacritic, the media have become more powerful than ever, and since the advent of the internet, nothing more than an internet connection is needed to slap a “Press” card in the brim of your hat and have your say.

So many words, so little actually said. While a number of positives have grown from the handover from print to electronic, the majority of games journalism is still based on spreading the same planted news and anonymous rumors as we used to see on fanzines and Geocities fansites. Worse still, the serious outfits remain little more than a mouthpiece for the industry, with few appearing to be willing to stand out from the crowd and defy the expectations and opinions of their peers, or their audience.

Heavily-hyped titles that are expected to be 10/10 invariably are. The award listings that dominate the news cycle at this time of year invariably reward the populist selection, the equivalent of giving the Oscar for Best Picture to the biggest Michael Bay summer blockbuster. Anonymous rumors on message boards are passed off as fact, discussed and criticized before a single confirmation phone call has been lodged. Journalists are encouraged to publish planted stories or advertisements masquerading as news.

The gift that the media could give the industry this year is to fulfill the media’s role in any industry – to be fact-reporter and watchdog, not mouthpiece or friend. Hold to morals and objectives and decline free swag. Play games to completion before you give your opinion on them (or at least admit this in the review). Stop endless whining about the minutia and focus on the very real problems that plague this industry and prevent evolution of game design. While many in the industry are antagonistic towards the media, we absolutely need them watching over us, and the consumer needs them to look out for their interests. So be fair, be negative if needs be, and above all, be honest.

The Third Gift: All is Bright

In this season of Game of the Year lists and time spent wondering what’s waiting under the Christmas tree, there will no doubt be much breathless talk about how this was the greatest year for gaming ever, just as it was last year, and the year before that. But apart from some encouraging trends, such as the increasing quality of cheap downloadable titles, it was a mediocre year for gaming, with nothing but HD sequel after HD sequel, and almost nothing in the way of the revolutionary, brilliant titles that we will be talking about ten years from now. 2008 will leave so little for gaming’s historians it will be like it never existed.

Worse, the few unique titles that were out there ended up disappointing commercially, critically, or both. Even though neither of them are the games they were hyped up to be, the perceived commercial failures of Mirror’s Edge and LittleBigPlanet should send a chill up every right-thinking gamer’s spine. If publishers were not already convinced that every game needs guns and/or licenses to shift units already, the sales data from the third quarter of 2008 will have convinced them otherwise.

Furthermore the collapse of Free Radical Design and Factor 5 – both studios with a reputation for quality that produced just one dud title – will have other developers looking nervously over their shoulder, wondering if they will be the next to have one title not come together and go out of business as a result. Everyone will be playing it safe in the knowledge that one step wrong might mean the end of them – and the result will be dull, middle-of-the-road titles.

In this atmosphere, this is the gift that is least likely to given. But the greatest gift that the creators could give gaming is what we have always been asking for – good games, and more of them. Not just the ones we clamor for and demand, but the ones we don’t even know we want yet, but will buy like hotcakes when they’re released. The holiday charts make for depressing enough reading this year, but let us not forget that ten years ago this year, Zelda: Ocarina of Time was the Christmas No. 1 across much of the world, a testament to how critically-acclaimed masterpieces can also touch the customer.

Games like that, games that will push this medium forward, are what we need. Those rare titles that both garner awards and generate revenue that can spent on further development, on keeping hardworking developers in jobs and convincing more people that gaming is both a viable hobby, and a viable career. This, more than anything, is what we need right now.

Christian Ward works for a major publisher, and hopes everyone gets the game they wanted this Christmas.