Videogame jargon term of the week is “Vendor trash.” For the uninitiated, this term is used to describe random scraps, clutter and offal picked up from containers and slain foes whose only purpose is to be sold to merchants for spare change. Vendor trash can apply either to items that literally have no other use, such as the rusty tins or scorpion buttocks one’s pockets inevitably fill with in World of Warcraft, or to items that have a use for a character build other than yours, such as scraps of ammo for a weapon you don’t use or particularly like in Deus Ex.

I bring up vendor trash because Dead Island is absolutely up to the eyeballs in the stuff, and in many cases the vendor trash you find literally is trash, picked off the floor or out of bins. No other character in the entire storied sphere of videogaming acts more like a hobo. Not even Ethan Thomas from Condemned 2, and he literally was one. It’s all part of Dead Island‘s weapon crafting system, which I’m not sure I like at all. It does allow you to upgrade your trusty sledgehammers into colourful playthings with nails on the end, but it brings with it the tedious necessity of hunting through every random container for every last spunky tissue and peanut shell on the off-chance that there’ll be a recipe that calls for it.

The alternative was the Dead Rising 2 system in which inventory space was extremely limited and the recipes were extremely specific. You weren’t supposed to carry around mountains of random garbage, just go to the appropriate shops to find the one or two specific objects needed to make the crafted weapon. The problem with that was it raised the question of why the game was happy to let you tape machetes to broom handles but not steak knives to curtain rods or meat cleavers to mic stands.

So in a nutshell I’ve been given cause to think about weapon crafting. I think it’s a sound concept to experiment with. Variety is never a bad thing to have in a game, especially when you’re talking about something that’s used as often as weapons, and doubly especially in a first person game when they’re usually being held right next to your face for 99% of the game experience. There’s also an added pride and investment to a kill when you’re using a really effective weapon you made yourself with your avatar’s own pixelated hands, rather than something you prised from a dead bloke five minutes ago.

But it seems to me that there’s no reason it couldn’t be taken to its logical extreme. These systems in Dead Island and Dead Rising 2 have really only danced around the potential. Why waste effort on modeling and animating 50-odd specific predetermined crafted weapons when you could allow for infinite possibilities?

I refer you to that Banjo Kazooie game on the 360 whose name I don’t quite care enough about to look up before I stop typing this sentence. Its gimmick was that the player constructed their own vehicles from small base components. There have been a few Lego games that do something similar. I also refer you with slight hesitation to Spore. All of these games gave the player crafting tools that were practically in-game art programs, and would then move and animate the creations procedurally. 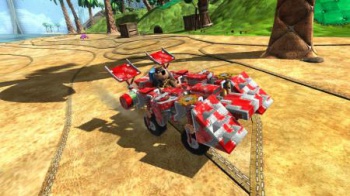 Tell me a system like this couldn’t be applied to weapon crafting in a brawler-type game with scavenging elements. It makes sense to me, if they can do it with entire vehicles in that Banjo Kazooie game whose full title I still haven’t summoned the energy to look up. Weapons in a brawler are exactly as important as vehicles in a racer (or whatever genre that game was), and they’re also considerably smaller and don’t require as much physics calculation. I would imagine.

Here’s how I picture this working: You collect a few sackfuls of random chair legs and breeze blocks from around the place and bring them to a crafting table. When you interact with that, you’re taken to a 3D grid-based interface into which you can import your collected items, move them around, rotate them and stick them together, assuming the crafting tables have bottomless supplies of duct tape. Each crafted weapon would have to start with a “base” item which dictates how the weapon is used – nightsticks or chair legs for one-handed, bits of pipe or 2x4s for two-handed, broom handles for weapons with a more sort of bo staff fighting style – and then you could just add bits on to any parts of that except where the player character’s hands go.

Each potential addition would have different stats that dictate how enemies respond when hit by that part of the weapon at speed. There’d be a Weight stat, obviously, which just bashes the baddies out of the way or crushes them against solid objects. Then there’d be a Cutting stat, which calculates the likelihood of severing limbs or heads. And I think there’d also be an Embed stat, which causes the weapon to get temporarily stuck in the enemy’s flesh, causing massive tearing damage or perhaps leaving you with a section of limb stuck on the end of your favorite sledgehammer that you named Killbastard. You could add treatments to specific areas, like the obvious sprinklings of nails to up the Embed stat. And there are special treatments, like lashing on an oily rag and setting it alight for added burn damage.

You’d need to make sure the physics were worked out properly. You want to stop people from eternally lashing more bricks and dead cats onto the end of their broom handles. Obviously the heavier a weapon gets the slower it would be to wind up and swing until you’re in full-on James-Sunderland-with-the-Great-Knife mode. And if a weapon’s severely off balance it might make your character stumble after swinging it, increasing the chances of a zombie getting in at the flank (because obviously we’re assuming this is a zombie game, what the hell else would it be).

In which case I would think there’d need to be weapon degradation, because scrappy improv in a tight spot is kind of the whole idea. If you really wanted to go all out you could calculate where the weak points are and snap off the physics objects there. Realistically a pool cue with a breeze block taped to the end probably isn’t going to last a single swing unless you tape two more pool cues to the first one, lengthways, to distribute the weight a bit better.

And it’s not just melee weapons, you could strap a kitchen knife to the underside of your assault rifle for a makeshift bayonet. Or add nails and a length of rope to a grenade to create a nailbomb with greater potential throw distance. And perhaps even strap some breeze blocks and 2x4s together to make a set of bookshelves for your student residence.

Banjo Kazooie: Nuts & Bolts, that was the motherfucker.

General Chang and Brewmeister Smith Are Coming to Skyrim