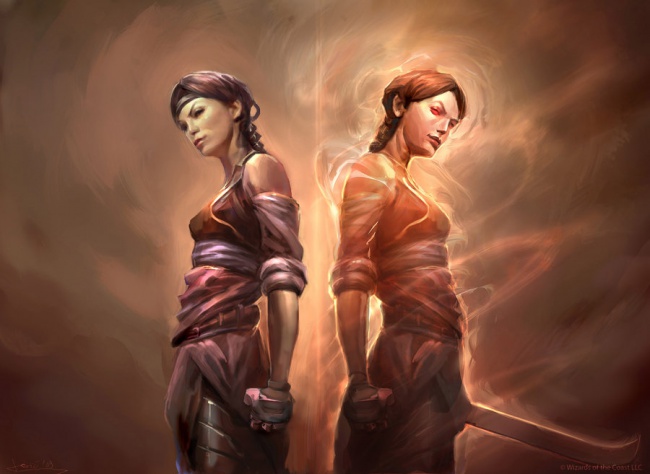 What’s make the deck particularly potent is that not only is it a simple two card combo, it also gets to threaten the combo all the time. If you tap out on your turn your Twin opponent can flash in their [mtg_card=Deceiver Exarch] and combo on their turn. This forces your opponent to play awkwardly, usually keeping mana open for removal spells, and leaves them vulnerable to a more tempo-oriented gameplan. With Twin becoming an ever increasing staple of the latest Modern season, many of the lists are branching out into the third color in order to either one-up the mirror or pad the numbers in other match-ups.

So let’s examine some of the cards that these splashes get you access to.

Splashing Green is perhaps a little deceptive because most of the UR lists are floating a single [mtg_card=Stomping Ground] for [mtg_card=Ancient Grudge] out of the sideboard, but the card that decks more heavily splash Green for is [mtg_card=Tarmogoyf]. The “Tarmo Twin” deck actual got quite a bit of snide comments thrown at it about smashing [mtg_card=Tarmogoyf] in every deck, but everyone’s favorite $200 bruiser fits very nicely into the tempo plan. [mtg_card=Tarmogoyf] forces interaction, it’s too big to be simply ignored, and this leaves you open for the combo. Other cards that sometimes get a nod are [mtg_card=Huntmaster of the Fells] – which I think is still one of the coolest named cards in Magic – and [mtg_card=Thrun, the Last Troll]. Blue and Red have you fairly well covered for spells, so Green typically is just bringing bigger resilient threats.

And finally, my personal favorite is splashing some Plains into those Islands and Mountains. Of all the splashes, UWR has perhaps been most deeply explored, mostly since it Venn diagrams into another Modern deck – UWR Control. You can spend a lot of time tweaking the ratios of how much you tip one way or the other. Sometimes you’re UWR Control that’s using the combo as a win condition, or hell slap [mtg_card=Splinter Twin] onto [mtg_card=Wall of Omen] to build your own personal [mtg_card=Howling Mine]. Or maybe White is just a smaller splash for sideboard card, White has a bunch of awesome ones, and [mtg_card=Restoration Angel]. [mtg_card=Restoration Angel] gives you another three power flash flyer to keep on the tempo plan. It also dodges [mtg_card=Lightning Bolt] and [mtg_card=Abrupt Decay], and it can still combo with [mtg_card=Kiki-Jiki, Mirror Breaker], which can kill through an opposing [mtg_card=Spellskite].

I’m a big fan of UWR right now because you can side out the [mtg_card=Splinter Twin]s completely and dodge a bunch of the common cards used against you, and [mtg_card=Choke] has increasingly become Green decks hate against you and so having access to [mtg_card=Tear] comes in handy.