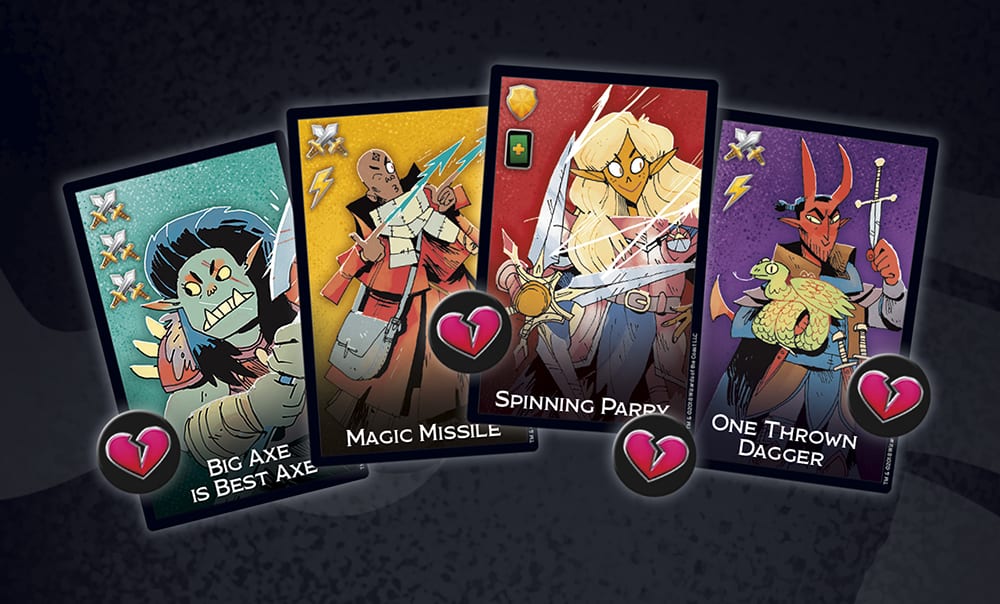 Dungeons & Dragons is traditionally a collaborative game with players working together to defeat monsters, explore dangerous places, and complete some form of quest. While the Dungeon Master can seem antagonistic to their players when running a combat, their goal is (or at least should be) to make people have fun rather than to win in the conventional sense. But two recent board games break from that dynamic, using the roleplaying game as a framework to have players fight to the death.

Avalon Hill’s Betrayal at Baldur’s Gate applies the flavor of D&D to the classic haunted house exploration board game Betrayal at House on the Hill, using almost all of the same rules. Set in the namesake city at the Baldur’s Gate video game, Betrayal at Baldur’s Gate pits you against perils unleashed by Bhaal, the god of murder. Between three to six players take on the roles of D&D heroes like a halfling rogue or human monk, each of whom has different starting stats and special abilities meant to help them explore and defeat threats. Players wander the streets and buildings of Baldur’s Gate or venture into the catacombs below the city by drawing tiles from three piles — one representing each type of location.

Flipping tiles can reward you with classic magical items from the game like the Deck of Many Things or Berserker Axe. Other tiles trigger events like an encounter with a deadly ooze where you must test your skills by rolling a number of six-sided dice equal to your score in a specific ability, with the roll determining whether you get a good or bad outcome. The most perilous of the tiles are Omens, which trigger a roll to see if the game’s signature betrayal happens. The more Omens you draw, the more dice you roll, meaning the more likely it is that the roll will result in a hard pivot from cooperative exploration and item gathering to a fight for survival against one of your friends. While getting loot is almost always good in D&D, watching other players succeed takes on an aura of dread in Betrayal at Baldur’s Gate because at any time all their strength could be turned against you.

The combination of what tile a player was on when the Omen dice triggered the “Haunt” and the Omen card they drew indicate which of a multitude of threats the group is facing and which player turns traitor. The traitor then leaves the room with one rule book, which explains their special powers and objectives for the rest of the game, while the remaining players stick together and consult a different book that tells them how they can win. When everyone’s ready, the group reassembles and the carnage commences.

The last three times I played I was the one who made the final Omen roll and wound up as a traitor myself. In one, my hero was the first victim of a raging minotaur who I then got to control as it rearranged the dungeon into a labyrinth and charged through the heroes to wound them and block their escape. In the other two my hero was mind controlled by evil items that bid me to kill my former compatriots. I enjoy playing the bad guy so I don’t mind this weird streak. I’m often relieved when I’m chosen as newer players can have a harder time making the transition without being able to call on their friends for guidance.

The real problem is that while all of the scenarios have strong flavor, the rules that govern them aren’t created equal and can result in boring or frustrating experiences. The minotaur was a great one because it gave both sides clear objectives and had a very dynamic power for the bad guy that required planning and communication. Less impressive was a magic sword that wanted me to kill all my compatriots. The players had to find an item that would let someone kill me without being tempted into picking up the sword themselves and continuing the rampage. Once they found it, they just piled every useful magic item on the most combat capable character while everyone else ran away so I couldn’t kill them and eat their souls for power. The one really entertaining wrinkle was that the party wizard tried to help by softening me up but accidentally rolled really well and just killed me, meaning he then became the new villain. Unfortunately the sword was basically incompatible with his character’s abilities. He made for a much weaker foe than my ranger had and was quickly dispatched. He didn’t have much fun with the sword but I loved that I got to live on even in defeat and the look of surprise changing into horror when he realized what he’d done was delightful for the rest of the table, even if it elicited groans from the rest of his former allies.

A nice in between scenario had me finding a lamp with the power of Bhaal. My goal was still to make sure everyone died but beyond attacking I could show people the lamp and force them to make a roll or fall under my control. I typically accompanied this with some maniacal cackling about seeing the light of the Lord of Murder. The fact that I could get lucky and mind control anyone meant that it wasn’t safe to designate one person as the champion and have all the other players scatter. I lost all three times to the other players and never really felt bad about it, but I did wish things were more balanced.

Dungeon Mayhem skips the collaborative phase altogether and just has two to four players slugging it out using decks representing four D&D classes: barbarian, paladin, rogue, and wizard. This game also does a great job with flavor, both in the card text which includes gems like the barbarian attack card “big axe is best axe,” and in making each of the decks feel distinct even if some of the abilities are identical. For instance, the paladin specializes in defense and healing while the wizard can produce ridiculous combos involving drawing half their deck and damaging everyone. The art is goofy and playful, like the rogue presenting a flower while clearly hiding a nail-riddled bat behind his back to represent a sneak attack.

The gameplay is otherwise extremely simple. Players take turns playing cards that can be static defenses or attacks on other players, with the goal of taking your opponents from their starting health of 10 down to zero. The last player standing wins. This results in all the ganging up and kingmaking you often find in simple purely aggressive games like Lunch Money or Gloom. I’d won two different games before we started playing Dungeon Mayhem, so one of my friends made it his personal quest to annihilate me as quickly as possible. He succeeded with a bit of help from other players that liked his ire focused away from them. Because this is an elimination game, that left me without much to do besides pick out the next game while my friends continued to duke it out. Luckily the choices are so simple that turns go fast — the game averages about 10 minutes compared to Betrayal at Baldur’s Gate’s one-hour run time. It’s a fine D&D-flavored pallet cleanser to let people get their competitive impulses out before switching to something friendlier.

Much like its primary rival Pathfinder, D&D has several board games that more closely mirror the feeling of actually playing the role-playing game and are based on specific published adventures. And like the Pathfinder Adventure Card Game, these games are purely collaborative. Dungeon Mayhem and Betrayal at Baldur’s Gate offer a different sort of experience, a way for players to channel the competitive impulses they normally have to quash during a D&D session. Do you imagine how your character could kill the other members of their party? Get jealous when someone else gets new loot? Have you considered siding with the campaign’s bad guy? Turning on your friends could ruin a roleplaying game but the explicitly antagonistic natures of these games gives you a low-stakes way to do just that.