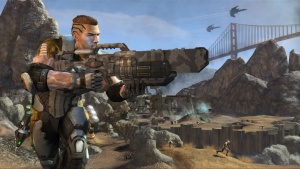 While reading through the June issue of Edge, I ran into the write up on LucasArts’ new title, Fracture. They’re approaching gameplay and story, hoping to closely integrate the two into the game’s technology, which stands apart from the standard mega-hyper-teraflop fare by allowing players to modify the world’s terrain. One particular gun creates a huge mound in the dirt, and while another collapses/tunnels into the earth. The result is going to be a puzzle/shooter mix that sounds pretty fun, assuming you believe a preview as far as you can throw it.

The story behind the game reads like LucasArts really put some thought into it. Here’s the gist:

Set on Earth in 2161, Fracture portrays the outbreak of war in the U.S. between the east and west coasts, and their respective allies, over the use of technology. The Atlantic Alliance of eastern America and Europe outlaws the genetic engineering beloved of the west coast and Asia, and conflict flares between their respectively cybernetically and genetically-enhanced troops.

The game’s hero, Mason Briggs, is a demolition expert on the Atlantic Alliance side, whose adventure begins at the war’s flashpoint: San Francisco.

As fun as the game sounds, I’m going to have a really hard time taking on the role of an anti-genetics reactionary allied with Old World thinking. In my view, the exploration of science and technology is more than just a business pursuit. It’s part of what makes humanity worth keeping around; banning the development of a technology because of some hide-bound techno-fear strikes against pretty much everything I believe in.

As games move into ever weightier subjects, I worry this is going to be a problem more often. I don’t imagine many atheists played the Christian fiction-inspired Left Behind: Eternal Forces.

Area 51: BlackSite is a large metaphor for the war in Iraq. Staunch supporters of the current Executive Branch may work their way through the game, only to find the story more and more disagreeable as time goes on.

I think it’s extremely laudable that developers are willing to take on issues like religion, politics and science. Where I take issue, though, is central to the medium: choice. In a movie or a book, we need to rely on the content to provide us with multiple viewpoints. If a film wants to ram a single interpretation down our throats, our only real alternative is leaving the room.

Games, on the other hand, are all about choice. As game makers tread on sacred cows, it’s even more important to offer choice to the player. BlackSite hasn’t released yet, but wouldn’t it be a nice change of pace to decide the “good” path is for pansies? You eventually begin working against the government in some capacity; wouldn’t that choice be much more meaningful if you had the option to continue pulling down your U.S. military paycheck?

Which brings us back to Fracture and the gene modders of the West Coast. If I’m going to play in a far-future wracked by war, I’d like the chance to decide which philosophical outlook I’m supporting. By offering players only one side of an issue to support, players can’t really explore or enjoy what it is they believe. Giving players a chance to look at issues from multiple viewpoints only accentuates what games can be, and why they deserve respect in the mainstream. But until more games do offer choices beyond dialogue options, we’ll still be a hobby of open doors and closed minds.