Nothing is more manly than an outer space adventure… so why is Apollo 13 such a tearjerker?

The goal of this series is to show that being “manly” and being disconnected with your emotions do not necessarily go hand-in-hand. While the approach to these articles is one of comedy and satire, the emotional core of these movies is very valid. Manly movies make guys cry, for example: Appalling 13. (Apollo 13, we’re talking about Apollo 13 here.)

For the longest time, this was THE film to pop in your new entertainment system to stretch its legs. The roar of the rockets, the inky blacks of space, the gentle pastels of the 1970s…two out of three of those still hold up. Sure, films like Guardians of the Galaxy would watch this now and give a big raccoon-shaped middle finger, but it’s not just about the special effects. This movie has heart, perhaps so much heart that guys watching it find themselves leaking fluid from their ocular portals.

Like always, we can’t go into a film without first approving it as a “manly” endeavor. Spaceflight, rockets, explosions…we’ve got them all. Dick-measuring contests at mission control as buzz-cut men argue the best options to keep their astronauts alive? Gotta have that. And let’s not forget that this is based on a real story. Little-known fact about men: history is totally our jam. Knowing what great men have done in the past makes us feel good about ourselves, or perhaps motivates us to do even better in order to top their achievements. It’s sort of a reverse-fatherly pride. Hell, just the swelling music as the rocket takes off is enough to us want to pound our chests in superiority to the heavens we’ve conquered.

Good, we’ve got a manly movie on our hands… yet we also appear to be grasping tissues. Why?

The plot of this film alone can give you chills, only because it actually happened (for the most part). Tom “The Perfect Man” Hanks is an astronaut at a time when Americans have just set foot on the Moon. His excitement to repeat that feat himself is countered by America’s waning interest in the huge cheeseball in the sky. Having already beaten the Russians at touching rocks, no one cares anymore, and so Tom is fighting a losing battle of relevance. A last minute plot-hand-waving ear infection for the original commander moves Tom up to Apollo 13, a rocket that I’m SURE has been inspected with the greatest of care by the people I just mentioned don’t care anymore. I’m sure of it. Sarcasm.

(Kyle’s Edit: Dan is trying to make my Apollo-nerd head explode. Please don’t take his poo-flingings as facts. Please. Apollo 13, the mission and the film, has no villain to lay blame on unless you insist on giving Teflon a reprimand for not being indestructible.)

The film establishes that Tom “Big” Hanks is a family man, with a devoted wife, oddly comical geriatric mom, dirty hippy daughter and there might have been several other moppets… all that matters at this point is that he had loved ones. His pilot of choice is Gary Sinise, who ironically lost his acting career on Mars. Sadly, he’s grounded after NASA did a blood test and found out he may have had cooties. Enter Kevin Bacon, because how else can you have six degrees? Oh, and Bill Paxton goes up too, which should have been a clue that at some point there would be a game, and it would be over. The star-power shoved into that module is probably why their rocket half-blew up.

We’re treated to a litany of foreshadowing that could kill an elephant. Tom’s wife drops her wedding ring down the shower drain. Tom’s car keeps stalling. Everyone has nightmares. WE GET IT, BAD THINGS ARE GOING DOWN! 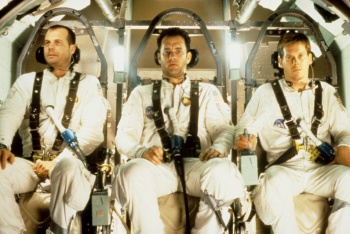 There’s even a prolonged discussion between Tom and his four-year-old kid about Apollo 1. While the kid is scared — because three of his dad’s buddies were somehow killed in a fire while merely sitting on the launch pad and trying to talk — Tom is every bit the good father and reassures his son that everything that went wrong is fixed, and his flight will be different. And that’s true. He will have a different type of major catastrophe.
Despite the omens, everything is so routine about this trip to the Moon that Tom’s wife almost doesn’t watch the launch, the TV networks don’t air the live broadcast from the rocket, and Ron Howard’s weird-looking brother is allowed to work at ground control. But when things go wrong, you better believe Ed Harris and his fantastic haircut bursts in and takes things over.

The horrible thing about being in the public eye is that if things go wrong, everyone sees it. Worse still is if you’re the family member of someone in the limelight, you have to watch them fail or die while everyone else asks how you’re doing (not well, I would guess). The human half of Turner and Hooch, with his crew of Bacon and Hicks, start flailing wildly as everything starts blowing up. Meanwhile, Tom’s family has to endure the horribly increased celebrity status that this disaster has afforded them.

Herein lays the true core of why guys get choked up at this film. It’s not necessarily a butt-clenched hope that Tom, Bacon and Hicks can get home safely without freezing, burning or exploding. We cry seeing what this disaster does to the families of the doomed astronauts. Part of being a “manly” man is the instinct to protect your family, even if that means protecting them from seeing you get hurt. When a crisis is happening to us, we tend to retreat into ourselves and become very private in order to spare our families that worry. The world press was having none of that in this case.

Tom’s wife keeps a stoic resolve on her face for the children and the press, but has her breakdown in private in order to mirror this protection instinct and show the motherly side of it as well. Also, the four-year-old is informed of the disaster with his father’s craft and immediately connects it to the Apollo 1 tragedy.

In the back of Tom’s mind, right next to the “Damn, I wanted some Moon cheese” was the thought that his family was going to watch him die on national television. Each explosion, oxygen leak and Kevin Bacon being Kevin Bacon was another nail in his coffin that his family would have to see every time they looked at the sky. The powerlessness of it is heartbreaking, that despite his competent crew and team of experts trying to fix the problem in Houston, he couldn’t protect his family from the immediate pain.

This frustration even manifests itself in Tom’s one moment of irrational action: he tears his medical sensors from his torso, stating “I’m sick of the entire Western world knowing how my kidneys are functioning!” While this was an immediate reaction to unrealistic orders from the flight surgeon, it was also the character trying in vain to hide even a small aspect of the emergency from his loved ones and friends.

Spoilers for a 45-year-old real life event and a 20-year-old movie, they make it home alive. Certainly a close call, and a worthy movie to get choked up at.