Animal Crossing torments me. Not just because I still play it for about twenty minutes every morning to dig up the new fossils (and incidentally I’ve found you can put a not insignificant dent in your loans every day just by finding the one rock that disgorges coins) but because it’s hard to categorise. Regular readers will know of my three-leg theory of game design, that the appeal of every game can be expressed as some combination of the three C’s: context, challenge and catharsis. But I can’t honestly state that Animal Crossing has a strong showing in any of those, so how does it make one keep coming back?

I said in the video that I think the most important factor is that every player of Animal Crossing is given an experience entirely unique to them, and then held responsible for it. Most games are about giving the player character a level of responsibility for the situation and the fates of the characters in it, with some exceptions – the Syndicate FPS springs to mind, in which the entire plot unfolds with no regard for the protagonist’s input whatsoever – but any sense of obligation you might have in most games is lessened by the notion that you are playing the same story as every other player. And that everything you do moves you towards a predetermined ending.

In Animal Crossing, the future is an unwritten, nebulous thing. It’s not much of a future, it’s probably going to heavily involve rudimentary gardening, pawning fish, and the movements of colourful animal people, but it’s one that is entirely yours to create. And no-one else will have one quite like it. A lot of people will have ones broadly very similar to it, but everyone will have their own little touches. Like the one surly bear character who has been carefully engineered to greet people with the phrase “lick my balls.” Maybe that’s how it gets you.

Animal Crossing’s trick is creating something unique that you are then stuck with, with only the fine details being changeable, and even that only through various levels of effort. For you see, it’s human nature to be unthinkingly loyal to what we have, once it can’t be changed. That’s part of what fuels retarded arguments over whose console is the best. And it’s the whole reason patriotism exists. It is not rational to claim that one country is the best if you have not had the chance to live in them all. But no-one has the time to do that, and everyone wants to stay in their comfort zone, so we turn to lazy thinking and self-delusion for our succour. Lazy thinking and self-delusion, come to think of it, is the appeal of Animal Crossing in a nutshell. 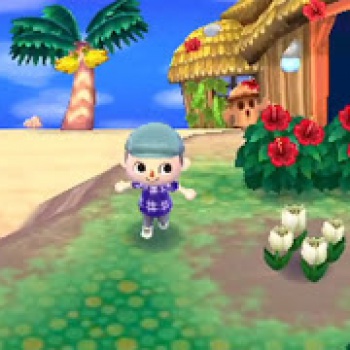 But back to Rogue Legacy. What does remain persistent in that game is the player’s home castle, which is where you build the upgrades to your character, and that presents the usual way games give every player a unique experience: with RPG elements. Build the character, and play the game the way you want to play it. Except not really, because maybe I want to play the game from the cockpit of a stealth bomber, and no such option is available. Furthermore, what characterises a ‘game with RPG elements’ (as opposed to an actual RPG) is that eventually every player character becomes the same, having acquired enough experience to get every upgrade.

Even furthermore than the previous furthermore, the tendency of a player given these options is to pick the abilities that allow them to beat the game’s challenges in the most efficient way. It’s not creating something personal according to the user’s fickle tastes, but to necessity, and always ultimately to the same end.

So for that reason, if being unique from player to player is something that bolsters the appeal of a game, then it can’t do so on the challenge leg of the stool, because challenge is something that has to be structured and fairly strictly determined by the game. I suppose we can eliminate challenge from our attempts to explain the Animal Crossing stool, which will admittedly make it a very wobbly stool, but let’s press on.

An example of unique and personalised context, for me, would be something like the Saint’s Row games where you are given virtually limitless options for the appearance and clothing of your protagonist, as well as sandbox exploration you can tackle however you like. And while in Animal Crossing you can customise your appearance, there’s an awful lot in terms of visual customisation that’s simply decided for you, like what residents your town gets and where their houses appear. The shop produces one new kind of wallpaper and one kind of carpet per day, and three new items of furniture, perhaps they’re throwing you a bone there. And while I suppose it’s technically sandbox, there just isn’t much to do. You can only arrange flowers into the shape of Levar Burton’s face so many times.

That leaves us with catharsis. And I think this is the likeliest leg of Animal Crossing. Not the kind of catharsis one usually gets from video games – i.e., blowing shit up to make my balls feel big – but the kind of catharsis that its spiritual sibling Farmville cynically exploits for cash: the catharsis of seeing a thing of your own hatch and grow and develop thanks to your nurturing care. But it also creates catharsis rather underhandedly by sticking you with the same monotonous activities in the same unchanging environment for so long that when something new happens, like a new shop opening, it’s like a glimpse of daylight after being in solitary for a month. Taking a slightly creepy voyeuristic tour of someone else’s town via the online features – perhaps one in which there are peach trees and the river flows east rather than west – feels like a day trip to Narnia.

So, from a design perspective, these are the important lessons to take from Animal Crossing: New Leaf, besides of course “Don’t play this fucking game, I’m serious, get away before it gets a hold on you, RUN MAN RUN FOR YOUR LIFE”