I wonder if E3 is long for this world. As I said in my last video, it doesn’t seem to matter whether publishers make their big announcements there or not; we live in a 24-hour, 365-day news cycle in which anything can be the big reveal du jour, and it probably makes more sense to do it at a time when it’s not going to be jockeying for airtime with every other announcement. 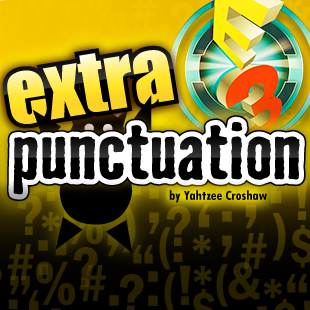 So with that aspect of E3 redundant, why we do we keep it around? Previously I’ve considered E3 to be the games industry’s equivalent of the Academy Awards: a thin veneer of practical function laid over an excuse for the elites to sit around slapping each other’s backs for days on end, and which is tolerated to exist because you emotional types with your human feelings of optimism need to have something aspirational.

Lately I’ve rethought this, and now believe that the closer equivalent to E3 is the Eurovision Song Contest. This comparison largely came to mind when I noticed that more and more people are viewing the presentations and livestreams second-hand through the streams of popular Youtubers, who riff and comment on the displays live. This of course is the means by which the Eurovision Song Contest has been made watchable for many years. I have fond memories of listening to Terry Wogan’s voice over dryly mocking the feigned musical ecstasy of simpering international fartgarglers.

The other similarity is that with every year the Eurovision Song Contest puts on less and less pretence of being an actual competition based on musical merit, when in truth it’s an informal poll in which European nations express their opinions of each other. I have no doubt that the UK are in for an absolute kicking at the next one, assuming they get invited at all and have the balls to turn up. Similarly, the premise that E3 exists for the benefit of the consumer is a slim one indeed; the consumer gleans zero benefit from being informed about a game that they can’t currently buy, in some cases not for years, especially if there’s no gameplay to show off. No, E3 is a popularity contest for the major publishers, which probably explains why Nintendo refuse to put much effort in these days: all they have to do is turn up and their fanbase lose control of their bladders.

There is nothing more alien and uncomfortable to watch than a corporation trying to put on a human face to convince you to buy something. It’s the Uncanny Valley at work. We watch the show with a riff track to break the awkward tension and assure ourselves that we haven’t been taken in. As for whether we have or not, that remains to be seen; we’ll need to see how this year’s announced games do with the buying public. With that in mind, I thought I’d spend the second half of this column giving out capsule impressions of the games I didn’t get around to mentioning in the video, and just for the sake of relevance, let’s keep it to games that are ostensibly coming out this year.

You don’t get points for fixing the problem you caused, you pricks. Perhaps that should be E3’s motto.

Mafia 3 – You know, guys, you didn’t need a twenty minute gameplay video to say the words “It is a crime sandbox.” Main character is a lone crim taking revenge upon a large and powerful rival organisation? You don’t say. Oh, and I notice that this revenge involves a lot of district liberating. Next you’ll be telling me that the player can choose their approach, and by that you mean, make a token attempt to be stealthy and clever before making one fuckup and having to shoot their way out. Also, were you trying to break the record for most licensed music in one PR video?

Battlefield 1 – Yeah, I know everyone’s already given Battlefield 1 a gold star for trying a new setting, but World War 1 shooters have been attempted and it’s never worked out, largely because World War 1 was an utterly tragic, pointlessly deadly conflict that lacked the nice satisfying villain of WW2, and any attempt to get a heroic action story out of it is going to be at the very least slightly tasteless. Maybe there’s room for a self-aware Spec Ops: The Line approach, but come on, it’s fucking Battlefield. Anachronistic hand-held machine guns all round, then.

Call of Duty: Infinite Warfare – Poor Call of Duty, it’s a little lost lamb. It went from modern warfare to advanced warfare and then no-one gave it any new instructions, so like the broomsticks from the Sorcerer’s Apprentice they just kept going in that direction, reaching the logical conclusion of sci-fi space battles. I believe I’ve pointed out before that shooters have been increasingly shifting into top gear as they move to classic-style fast-paced fun shooter town, and IW seems to be trying to cling to the rear bumper, but they can’t quite shake the old instincts for chest-thumping clunkiness in all the colours of the brown rainbow.

The Last Guardian – Well, this is one of the big ones, isn’t it, a spectre from the Duke Nukem Forever feast, and one wonders how it could possibly live up to the wait. The entirety of the last generation of gaming took place since the last game by these guys, Shadow of the Colossus, but the time doesn’t seem to be showing. Looking at the 2016 trailer, does anyone else think it looks a bit rough, graphically speaking? Is it just me? I mean, I feel like the bloom is threatening to gouge my eyes out and when the monster’s fur is ruffling in the wind it looks like he’s glued five hundred corn flakes to his back.

Titanfall 2 – WELL LOOK WHO CAME CRAWLING BACK. To single player gaming, I mean. If you want to know why triple-A gaming just doesn’t seem to be making any progress, it’s because of shit like this. Time was, a full price shooter was expected to have a single player campaign and a multiplayer mode. Titanfall was among the crowd that took the campaign out and tried to convince us that, no really, it’s still totally worth the exorbitant full price tag. Then they talk about putting a campaign back in for the next one and expect praise for the innovation. The same kind of innovation as a Steam developer who doubles the price of their game the night before a 50% off sale. You don’t get points for fixing the problem you caused, you pricks. Perhaps that should be E3’s motto.