A couple of weeks ago we enjoyed a little idle speculation on what the prevalence of collateral damage in popular entertainment says about the collective mindset of the human race. Well, let’s add to that speculation, like a bunch of police profilers trying to identify a serial killer, and wonder what the deal is with all these survival games.

Rust, Starbound, and 7 Days To Die are only the most recent additions to the genre, there’s also Don’t Starve, Sir, You Are Being Hunted, Minecraft and Terraria and all their little me-toos and the specter of [/i]Day Z[/i] poking its head into Steam recently. At first glance, the survival game’s popularity is difficult to understand, even for me, and I quite enjoy them. We play games for escapist fantasy, but having to eat and stay warm and have somewhere to sleep at night isn’t exactly escapist, nor is dying alone in the wilderness an attractive fantasy.

But the resoundingly clear theme of the wilderness survival game is being alone, or at least, independent from other human beings. And I can see the sense in that appealing to a new generation of heavy internet-using urban youth. These are people absolutely surrounded by other people, in towns and cities, and yet pursue a solitary existence, more at home with online companionship than physical. And in my experience, getting most of your ideas of humanity from online interaction will only fill you with increased disdain and contempt for the faceless strangers you see from your window, and increase the secret desire to die alone in the wilderness.

As I said, this often goes together with zombies, and we’ve closely analyzed the appeal of zombies in previous editions of this column. We all love our zombie walks, don’t we? We love to speculate on what our survival plans would be in a zombie apocalypse scenario. It’s all the appeal of the wilderness survival scenario, but it’s also on familiar turf and you don’t have to move anywhere.

I have to admit I do find it irritating when people talk about what they’ll do after the zombie apocalypse. For the obvious reason that, an apocalypse being what it is, you will almost certainly be dead. The definition of apocalypse is the majority of the population being dead, and last time I checked, ‘majority’ is likely to include you and me and everyone we know. Probability’s working against you. Those of you that aren’t killed in the initial sweep won’t last very long simply because you’re here, procrastinating and reading internet articles, when you could be doing dead lifts or learning how to make fire without matches.

But the other reason talk of zombie apocalypse irritates me is because a zombie virus would never actually cause an outbreak on a large enough scale to infect the majority of humanity. And I don’t say that with any kind of fierce scientific background. This is just with a basic employment of logic. First of all, there’s already a bite-transmittable disease that makes sufferers really angry, namely rabies, and rabies has not infected the majority of the population. HIV has infected more people, and biting someone is far less work than seducing them. 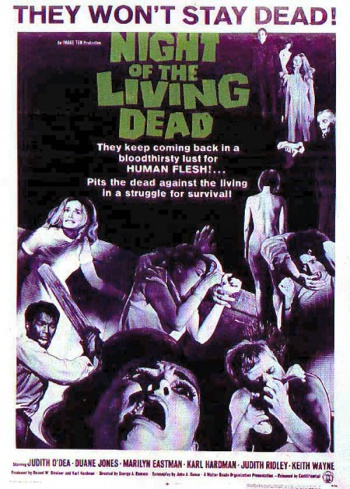 Now, if we’re talking about the kind of Night of the Living Dead zombie virus that automatically infects all of the recently dead, then fair enough, we’re fucked (Christ knows how that’s supposed to work, mind). But if we’re just talking about your ‘Infected’ brand, a virus that only transmits by bite and only to living humans to create zombies with no instinct except to devour the flesh / brains of the survivors, then yeah, that is not going to spread far. And now I’m going to explain why, using only logic and maths. Gather round.

What we need to establish first is that zombies mindlessly consume flesh. They are incapable of higher thought or strategic thinking; they only want to devour the living. They do not understand that they can increase their numbers by just giving their prey a little nibble on the bum and sending them on their way. When they have a victim, they are going to bite and bite and bite and pull guts and limbs apart until the body of the victim is useless as a zombie. It’s just going to be an immobile pile of undead lumps very angrily wobbling on the floor. Zombies reproduce exclusively through the ones that get away: Humans that get attacked, bitten once or twice, and then break free and run off to hide among other humans.

So a human encountering a zombie ends one of three ways: the human gets away clean, the zombie bites them and then they get away, or the zombie bites them, disables them and tears them apart. That means that only one in three zombie encounters results in the infection spreading. That’s simplified of course, each result will not be an equal one in three chance, probabilities will shift depending on circumstance and the strength, agility and intelligence of the human. But I’d argue that the probability of spread infection is even less, factoring all that in; a human competent enough to escape is likely to be competent enough to avoid getting bitten, as well.

With all that in mind, zombie hordes are self-defeating because they reproduce far more efficiently when there is LESS of them. One zombie might catch a human by surprise, bite them, and then it would be fairly easy for the human to get away. Then two zombies are on the prowl, probably still easy to get away from, but I’d estimate that once the zombie horde gets to around five or six individuals, the horde is both too large to effectively take anyone by surprise, and also too large for a bitten and wounded human to escape from.

Therefore, shut the fuck up about what you’ll do after the zombie apocalypse: Because even if such an infection could exist it’s only ever going to be extremely localized. You’d be better off speculating on how you’d survive an apocalypse of carnivorous jam. Have you made a jam plan? Have you looked out of your window and decided on a path you could take that only incorporates inorganic objects that extrude more than three feet from the ground? Buy my book for this and more safety tips.