So last week in Zero Punctuation I pretended that reviewing the new tie-in Star Trek game would be a good way to mark Star Wars Week, as a sort of hilarious comic misunderstanding that I’m sure we all enjoyed, but it’s Star Wars I’d now like to talk to you about. With Disney buying up Lucasfilm the Star Wars franchise is now being portioned out like a fucking Thanksgiving turkey. A new sequel trilogy starting in 2015, and the rights to make Star Wars video games being snapped up by EA (and incidentally I have come to decide that “EA” is an abbreviation of “EAARGH”).

Can Star Wars as a franchise survive this raddling by cash-hungry wolves? Perhaps more to the point, can the affection it holds in the minds of entire generations of nerds survive? Well, I know what you’re going to say, fans: you’re going to say that whatever comes out of it, it can’t possibly be worse than the prequel trilogy. In what I would say is almost unprecedented in the history of nerd culture, the reaction to Star Wars being taken away from its original creator to be made by somebody else was not cries of “SACRILEGE!” but deafening sighs of relief. And a prevailing excitement that Star Wars will finally have the additional films it “deserves.”

I can’t deny that keeping up with what George Lucas was doing with Star Wars over the last few decades has been like sitting opposite a mother and child on public transport, where the mother dresses the child in a bright pink tweed suit and dotingly gives them a fully-functioning chainsaw to play with. But lately a question occurred to me:

Would Star Wars still have the high profile it has, if the prequels (and indeed the additions made to the remastered originals) had been mediocre, or merely alright, rather than fucking horrible?

Little background here. I’m not a massive Star Wars enthusiast like some people who write on the Internet. I watched the original trilogy as a teenager, I liked The Empire Strikes Back obviously, I thought the other two were a bit scrappy. Return of the Jedi in particular started letting me see the ghostly warning signs that float around George Lucas’ head like Jacob fucking Marley. Frankly I was much more into Star Trek, science fiction rather than science fantasy. I prefer having a stronger feel for the mechanics of the situation and what degree of effort needs to be put in to sort it out. When you introduce a concept so nebulously all-powerful as ‘the Force’ then you’re going to raise the eternal question of why they don’t just use the Force to resolve every slightest issue that comes up.

So I can’t know what it must have been like for a die-hard fan to see the prequel trilogy for the first time. I imagine it being like how I felt about Red Dwarf when it came back after its long hiatus for Series 7, but on a larger scale. But detached as I am, even I can see that George Lucas’ efforts in the post-talent phase of his career did the original trilogy more favors than you may realise. 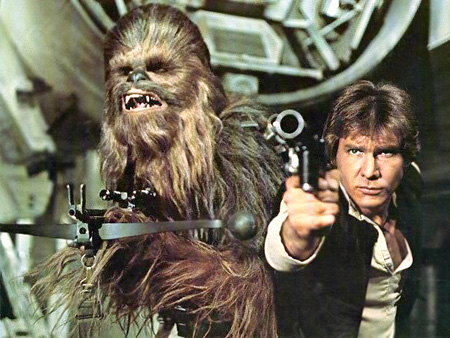 Before the prequels, the original trilogy was floating in a void, with Empire floating a little bit higher but basically in the same bubble. After the prequels materialized, Star Wars existed for the first time on a clear and distinct spectrum of quality. The originals weren’t floating in a void at all: they were helium balloons on the end of a very long rope, the other end of which was lodged in a tar pit with the prequel trilogy. It’s the same principle by which one is advised to go out on the pull with a slightly uglier friend of the same sex, because it’s only with a convenient comparison that the qualities of anything become identifiable.

Even George Lucas’ concerted efforts to ruin the original trilogy by the repeated “Remastering” death of a thousand cuts ultimately worked to the benefit of the franchise’s public profile. The body’s immune system becomes stronger and more efficient the more small germs and infections it is exposed to. In the same way, the original trilogy’s immune system – meaning, its fanbase and the affection it held in their memories – only grew stronger as George Lucas made more and more tweaks and additions to varyingly disastrous effect. Han shooting Greedo in the bar was not a T-shirt, a slogan or a symbol of defiance until Lucas threatened it.

The key word is “threat.” Star Wars fans, until then engaged only in go-nowhere arguments over whether Lando was cooler than Han or if Luke was boning Leia between films, suddenly had something to unite against, to remind them of what was at stake, just as old enemies Britain and France put aside their differences in the face of the invading Hun. I’ve been criticizing things for long enough to know that goodness or badness fall kinda secondary to the passion that a work provokes, love or hate. We still talk about Citizen Kane because it was really good. We still talk about Plan 9 from Outer Space because it was really bad. What we don’t still talk about is the 1976 James Earl Jones vehicle Deadly Hero, because it wasn’t awful and it wasn’t great.

But what would have happened if the prequel trilogy had been like that? Merely alright. Ticked all the boxes, had some good moments, maintained a level of quality similar to that of Return of the Jedi. Kept the level of esteem the series has in the minds of the fans at as near to level as makes no odds. What if the remastered versions had done nothing more controversial than remove specks of dust from the original print? There wouldn’t have been much debate, and the only way something remains within the collective unconscious is as long as there’s something to argue about.

The worst possible thing the 2015 sequel trilogy could do (or however many films they end up squeezing out, I hear troubling rumors of Disney putting out one a year) is be mediocre. Such a development would be the beginning of a long, slow, slide into dispassion. The sort of thing Star Trek went through that necessitated its recent rebooting, a procedure not unlike the application of a defibrillator. And unfortunately mediocre is what big-money entertainment does best. It might even be advisable for Disney to shoot for the worst possible film it could make. It would probably be easier. Just populate the new Jedi Council with a bunch of CG black and white minstrels or something.