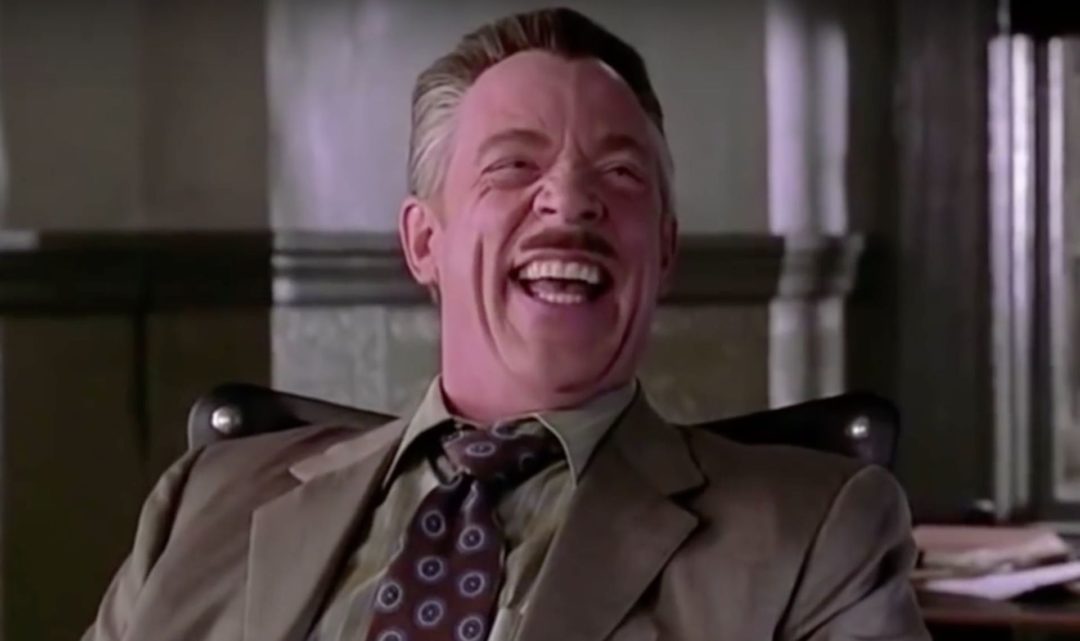 This story contains spoilers for Spider-Man: Far From Home, as well as many handsome images of J. Jonah Jameson.

Spider-Man has one of the most storied rogues’ galleries of any superhero. From alien symbiotes to science experiments gone wrong to special effects experts, our friendly neighborhood web slinger faces plenty of life-threatening enemies. But one figure continually stands out in the lineup of iconic villains by presenting a danger to Peter Parker at every turn. He can turn the tide against Spider-Man with one fist on his desk, hurting him without even laying a finger on our hero.

And he wants pictures of Spider-Man.

J. Jonah Jameson is loud, angry, shifty, and one perceived slight away from firing every person on his staff. He’s the kind of guy that makes you feel dirty. Jameson’s power is simple: He can turn the city of New York against Spider-Man. That is dangerous because Spider-Man is most effective when the city thinks he’s the hero. 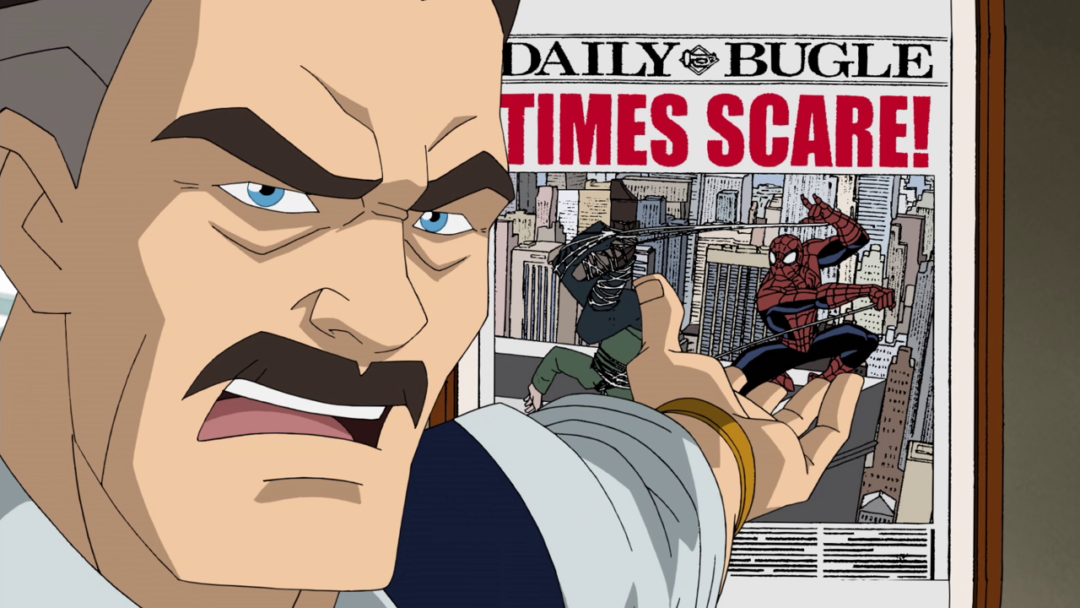 Spider-Man’s biggest weakness is perception, and one man knows how to consistently use it against him. With a clear bias against our hero and a platform from which to share it, Jameson succeeds where even the most powerful villains fail. Sure, Doc Ock might leave deep scars and Electro might nearly shock our hero to death. But damage to your reputation is much harder to heal.

J. Jonah Jameson was first portrayed on film in Sam Raimi’s Spider-Man by J.K. Simmons. His version of the character is a tabloid reporter through and through, mirroring his portrayal in the comics before him. He’s a constant joy to watch, existing somewhere between white hot rage and deep annoyance. He talks a mile a minute and his energy is infectious. He wants pictures of Spider-Man, and since you don’t have them, you’re fired. But he changed his mind, so you’re rehired and he’s cutting your pay instead.

This Jameson is an over-the-top satire of the kind of sensationalist journalists regularly portrayed in pop culture. But what was once an exaggeration now feels like he would be right at home at CNN or Fox News with the talking heads prone to stirring up controversy, exaggerating headlines, and screaming over others to get their point across. 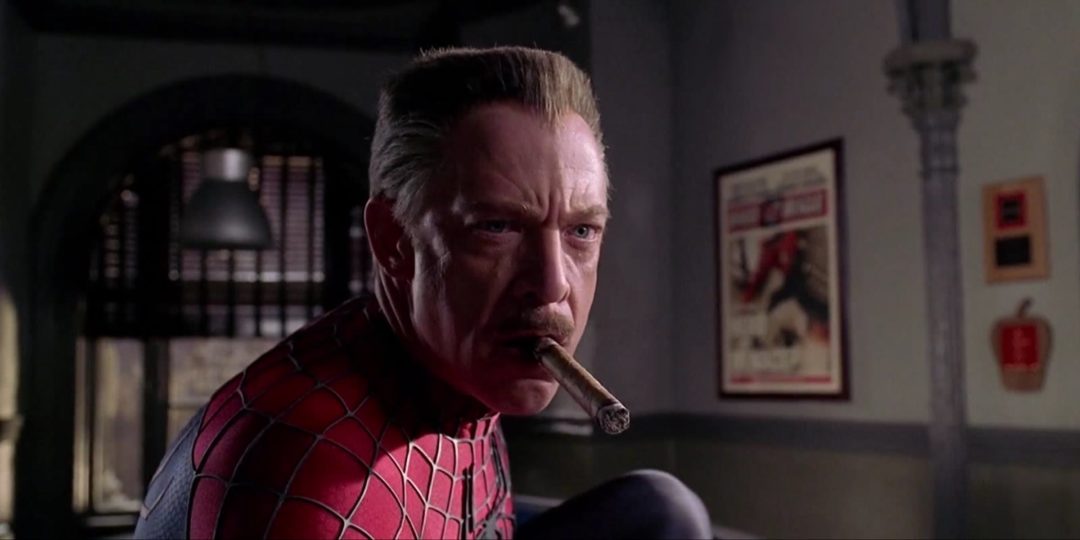 But Jameson is more relevant than ever. The need to poke fun at the less-than-ethical elements of the news has only increased since J.K. Simmons first donned the character’s signature mustache and cigar. However, the character needed to evolve to meet the current climate. So how do you pull this off without betraying the character we’ve seen? Make him Alex Jones.

In the Raimi trilogy, Jameson was already on the edge of being a conspiracy theorist. Going in, he just knew that Spider-Man was a menace and was willing to twist the facts to suit that reality. It didn’t matter how much Spider-Man acted like a hero; Jameson had already made up his mind. To truly capture the modern discourse, Jameson needs to stare directly into the camera and scream about how Spider-Man is an agent of the lizard people summoned to put chemicals in the water. That one time he fought the Lizard was a false flag to turn us away from the truth!

The modern conspiracy theorist is the clear progression from where we saw Jameson at the end of Raimi’s Spider-Man trilogy. People like Jones have a similar level of influence and can often have similar effects on public perception of certain figures. Insomniac’s Spider-Man game tried this to mixed success by making Jameson a radio host. (The Spider-Man comics explored this concept in much deeper depth.) But J. Jonah Jameson needs to be pushed as far into absurdity as possible. 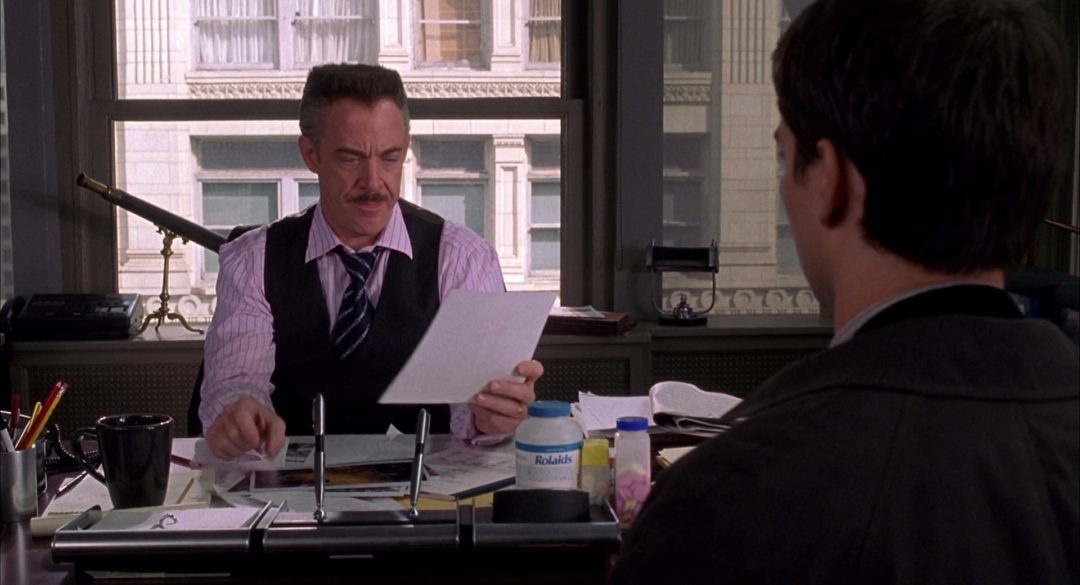 We finally see the culmination of this idea in Spider-Man: Far From Home’s mid-credits scene, where Simmons’ J. Jonah Jameson shows up on a set obviously modeled after Jones’. In the scene, he broadcasts doctored footage that makes Spider-Man look like the villain in the fight against Mysterio and reveals Peter Parker’s secret identity.

Jameson broadcasts this footage to prove that Spider-Man is a menace with the same tone we know and love, attacking the hero in a way he can never recover from. In modern terms, J. Jonah Jameson doxxed Peter Parker with incredibly tenuous evidence. Mysterio deceived the world with clearly edited footage full of lies, and Jameson was more than willing to play along. In our current media landscape, this dynamic feels spot on.

Jameson is compelling in part because he is so close to reality. We all know of the sensationalism that saturates the news media, and this character holds a mirror up to that. Ironically, we need J. Jonah Jameson to show us the truth.