Video games are never going to be free of health systems. It’s just an inevitable necessity of the medium. A game is a challenge, and a challenge will have a victory and a failure state. If we want to avoid the failure state, there needs to be something that indicates how close we are to succumbing to it. And usually that’s a health system. They’ve been with us since the beginning. They used to be called “lives.”

No, health systems are probably never going to be realistic, because in a truly realistic game you wouldn’t be able to continue after getting shot once, and any game that doesn’t let you make any mistakes isn’t going to be much fun for anyone except insane obsessive no-hit-runners. If you’re shot in a non-vital area, you could just disable the character, slowing movement speed or reducing their ability to use weapons, but there’s a reason why many retro games with lives systems make you temporarily invincible after being hit. When you’re in a bad place and you make a mistake, you’re probably going to keep making mistakes if you aren’t given the edge to immediately get out of the bad place, and you certainly are going to keep making mistakes if you’ve been hobbled.

So yes, surviving having your flesh mangled by bullets is terribly unrealistic. Personally I’ve always thought, in a realistic game, health should be replaced by a “luck” system. When the game calculates that a bullet is about to hit you, it corrects the trajectory so it doesn’t, and you lose a bit of your luck bar. Then when it runs out you finally get hit by a single bullet and go down crying like a big fat girl.

What’s not a great health system is health that swiftly regenerates by itself after you’ve not been hit for a few seconds. And it’s not just because it’s unrealistic, nothing’s going to be realistic, we’ve established that. It’s just really boring. It’s a cut-down experience.

Before the health regeneration glut in shooters, health was a resource you had to manage carefully. It added a new element to the battlefield – if your health was low all you could do was try to sprint to some kind of restorative before you succumbed. And if there wasn’t a source of health nearby, you just had to be extra careful. And weren’t those the most exciting parts of a game like Half-Life, when you’ve scraped through an encounter with several organs missing and your arms hanging off so now every health point counts and your wit must be about you at all times?

I do not know how anyone could have thought that regenerating health would enrich that experience. When your health can regenerate, all you need to do is, as ever, hide behind a wall and wait for a bit.

What regenerating health also does is effectively reset the game between every fight. Nothing is carried over, it’s just a sequence of unconnected and yet eerily similar gunfights. Without health restoratives, you’re also limiting the means by which the player can be rewarded for exploring or finding secrets. All you can offer is more ammo, which they can pick up all the time from fallen enemies anyway. 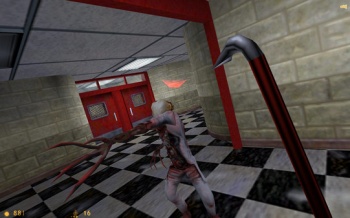 If you’re so concerned about keeping your combat arenas nice and tidy that you can’t stomach the thought of cluttering them up with health potions and first aid kits, game developers, then let’s consider the alternatives.

Health by station – the Half-Life / Chronicles of Riddick approach, health stations are fixed objects that bestow health as many times as you like until it runs out, avoiding the frustration that comes from picking up a 50-health pack while at 99%. Players will have to make crucial strategic decisions, that is, whether it’s wise to continue into the fray after a hard battle or backtrack to the health station two rooms ago just for the extra insurance, perhaps kicking the bodies of their previous victims on the way.

Health by murder – the practice of gaining health from defeated enemies, either by picking up restoratives that they drop (much more common in previous eras of gaming) or using some kind of special move to siphon health from them, a la Splatterhouse. This motivates the player to some kind of action if they want to survive, but I suppose there’s a fairly vast logical flaw in encouraging players to seek regeneration from the very source that caused them injury in the first place.

Health by environment – gaining health from things that are pretty much just lying around everywhere, which does make healing easy but at least requires some action on your part. Both Infamous and Prototype used this – the former let you suck up healing electricity from anything that was connected to the mains, and in the latter you just ate civilians, which there never seemed to be any shortage of. You’d think they’d learn to stay indoors, or at least endeavour to not taste so nice.

Health by sort yourself out for god’s sake – one health system I’ve always rather admired is Sonic the Hedgehog‘s ring business, in which the amount of health you actually lose from a single attack is dependent entirely on how much of your wits you have about you. Or how close you happened to be standing to bottomless pits. It’s so elegant in its simplicity, it makes me wonder why I don’t see it used more often. It doesn’t translate well to 3D gameplay, but then that’s Sonic in a nutshell, isn’t it.

Health by walking it off – alright, if you really desperately don’t want to have to add any more art assets or serious programming, how about this: you only gain health when you’re moving, or jumping, or doing a little dance. Yes, you could exploit this just by running around in circles in cover, but at least that’s something. At least that’s not just sitting on your fat arse getting high off cordite fumes.

I guess my position is that, when you give health for free, you’re taking something away from us. Ironically. It’s like living in a nanny state. When our responsibility for our own wellbeing is taken away, we lose interest, we lose self-confidence and we lose part of the sense of who we really are. And that’s also why Australia should introduce the fucking R18 certificate, already.