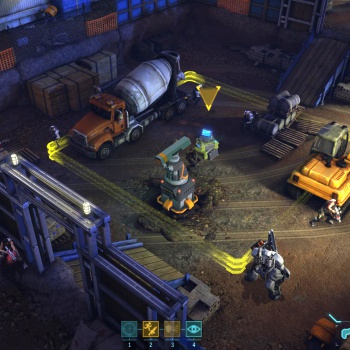 In 1994’s XCOM: UFO Defense, you built bases all over the world to defend against the alien menace, upgrading them all along the way. Firaxis’ remake from 2012, you only had one base, but the wonderful mix of turn-based combat and strategic decision-making was enough to placate old fans as well as create new ones, myself included. Still, one of the major criticisms I hear from stalwarts is how they miss balancing multiple bases in the new game. When I spoke to Lead Designer Ananda Gupta about XCOM: Enemy Within, I put him on the spot and asked why there’s only one base in Firaxis’ XCOM.

“The multiple base thing was something that I know we struggled with heavily but ultimately a single base, a single base made the most sense,” Gupta said. “We have unique named characters such as Central Officer Bradford, Dr. Vahlen, Dr. Shen. So right away their presence indicates that they would have to have a physical location and that would automatically elevate one of the bases above the others, because they couldn’t be in all three places.

“Furthermore, having them say and do things across multiple bases would have meant some weird UI elements such as one of the bases has them and then all of the other bases have little view screens with their heads on them, stuff like that. Another thing is that we really wanted the player to feel immersed in the base and, we succeeded with that to a certain extent but we really wanted to players to click on the hologlobe and advance time. Well, okay, does every base need a hologlobe? And if all the bases are going to have redundant essential elements like the hologlobe, like the situation room and so forth then they start to look kind of the same as one another.

“From a gameplay point of view you can come up with lots of things that multiple bases could do right,” Gupta continued. “Obviously, in the 1993 game having multiple bases was also your method of extending your vision over the globe. And that didn’t really fit with the system that we wanted for vision with the satellites.”

When I heard about an expansion, I thought perhaps multiple base locations would be an option, but after hearing Gupta’s explanation I can see why his team decided to focus on improving the tactical and strategic variety in Enemy Within. Still, if there’s a third expansion in the mix, I pressed Gupta to say how he would implement more than one base. To be clear, we’re in “Game Design Bullshit Land” here.

“It’s a wonderful land, isn’t it?” Gupta asked, laughing, before indulging me with some speculative design.

“My preferred approach would be something like simple interceptor bases all over the place where your planes are based, maybe setting up kind of limited outpost-ey bases would be fun,” Gupta said, referring to how limited the systems are for tracking down and destroying enemy UFOs. “Interception is already in there only because it was in the 1993 game. I mean, you need some way to get the UFOs from the sky into flaming wrecks on the ground, but building more gameplay onto that is something we’ve talked about.”

Even if there’s a good reason for there to be just one base, I wondered why that base couldn’t be attacked and feel vulnerable to aliens like your bases could in the original.

According to Gupta, the narrative pacing in Enemy Unknown wasn’t perfect, and he’s aiming for the expansion to correct that somewhat with the addition of the new EXALT faction. “When you’re looking at it through our self-critical eyes, we thought once you hit the alien base [in Enemy Unknown], the narrative kind of flattens out a little. It’s a straight away finish to the end, so let’s see if we can add some additional stuff.

“My objective was that the EXALT would occupy that role,” Gupta explained. “They were supposed to be the post alien base challenge, but that didn’t really work, partly for narrative reasons. If EXALT starts after the alien base then they have to be pretty awesome because you’re pretty awesome by then. If they are going to be a challenge then they almost have to be too awesome. I don’t want EXALT to be as awesome as you – they’re the bad guys, I don’t want them to be as awesome as XCOM.” So what happens is the EXALT missions really ramp up around the alien base mission itself, so the drama is heightened early.

While EXALT is “light on story, but heavy on theme” as I mention in my preview of Enemy Within, Gupta says there’s a lot of story to be had in a three mission arc that starts in the second month of the game called “Operation Progeny.”

“It’s a side plot that’s similar to ‘Operation Slingshot’,” Gupta said referring to the DLC released last winter. “[Progeny] is a three mission arc that adds some new story elements. Now ‘Slingshot’ was a fairly straightforward and almost, not stand alone, but it was something you did instead of your regular counsel missions. That was a really fun thing for players because there were some new environments, and you got a new character out of it.

For more information on EXALT and how the shadow group of humans fighting against XCOM will affect Enemy Within, check out my full preview of the faction here. Otherwise, you’ll have to wait until November 15th to play it on PC, Xbox 360 and PS3, and discover for yourself whether Firaxis and Gupta should added multiple bases, or whether it made sense to deliver on all the cool stuff they’ve been talking about since Enemy Within was announced this summer.