Ever since George Romero first explored the role of the post-alive in today’s society, the zombie has only grown in popularity, exploding from their cinematic roots like a big decomposing dandelion. Putting the word “zombies” in the title of a game, especially in an open market like the iPhone app store, is a virtual guarantee of more sales. Even putting “zombies” in the title of this article will probably up the comment rate.

Zombies are almost as ubiquitous in videogames as romantic subplots in Hollywood films, with game plots often having to make quite extraordinary leaps to allow for them, such as in Black Ops‘ incidental zombie mode or any other game where the magical world-changing substance du jour once again happens to make humans shamble around moaning for some utterly contrived reason. It’s like zombies are included in the video game Equal Opportunities legislation.

And it even extends to the outside world. There’s a yearly event here in Brisbane (and in several other cities, I understand) called the Zombie Walk, in which nerds young and old dress up like the undead and go on a shambling tour of the city centre. It’s happened regularly enough to become quasi-official, and sometimes it’s not even done for charity. Normally there are only two reasons this many costumed people get together – charity or for weird sex reasons. But zombie walks don’t appear to fall into either category. People just like doing it.

So what is it about, then, this human (especially nerd) love of zombies? I’ve come up with a few theories that I’d like to share with you for discussion purposes, for nothing in this world is not worth over-analysing.

1. Zombies are an unequivocal enemy

It’s possible I’m projecting, here, but I think it’s fair to say that human beings basically don’t like each other. It’s part of our built-in animal pack instincts to hate the outsider, because the outsider doesn’t have the same stake in the life of your cubs or your harem of lionesses and will probably run off with all your dead zebras the moment you turn your back. Human society has grown while the instinct has remained, and now we see outsiders everywhere. Fear of the outsider is the root of every moral panic exposing the dangers of violent movies or games or comic books. It’s the cause of every prejudice, from the suspicion one feels for the green-haired indie musician one’s daughter brings home to the fear of those strange brown people because 0.000001% of their population collectively murder less people annually than domestic disputes.

Few if any of these petty hatreds are rational. They exist because humans can’t function without an enemy, something to hate, and indeed to blame for the injustices we believe we suffer. Zombies are a permanent foe. To our “us” they are eternally “them.” No redeeming qualities, no moral ambiguity. I guarantee you, in a zombie apocalypse scenario, relationships within the human strongholds will be considerably more courteous than they are now. We’ll reserve our hate for those rotting punks outside. They want to eat us for no good reason. What dicks. 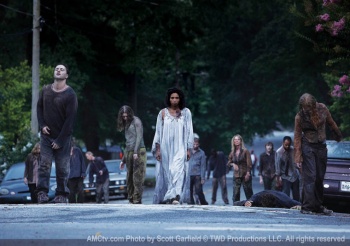 The flaw in argument 1 is that it could just as easily apply to any non-human enemy, like aliens or killer tigers. But what gives zombies the edge, enemy-wise, is that essentially they look just like us, give or take a jaw and a few patches of skin. For if there is one thing humans hate more than outsiders, it’s themselves (unless I’m projecting again.) Killing a human is more satisfying than killing a tiger (unless you’re Lara Croft) because we understand humans, and we understand that some humans deserve it. And when a human is trying to break open your head and consume the contents, you officially have carte blanche to do whatever the hell you want to them without guilt and for as long as you want, because they can’t feel pain and no grieving zombie children will be left behind. You’re basically doing them a favor. Try to keep that in mind as you pistol-whip their foreheads into jam.

For all the religious leaders and spiritualists talking with perplexing authority about something they in truth know as much about as they do the life cycle of the Flanagian Space Wasp, no one really knows what happens after death. The only thing we do know is that the concept of an afterlife, any afterlife, even the hot fiery ones, holds more appeal than the notion that our consciousness will simply cease to be. Now, the one thing everyone knows about zombies besides the brains and the groans is that they dimly, dimly remember what they used to do when they were alive, that’s why they all hang around shopping malls. This implies that a dead body holds some kind of trace of the person they once were which can be “woken up,” and however horrific the form, I think people still find this notion more attractive than a corpse simply being an empty, useless object. Personally, I think burials and cremations make about as much sense as marking Grandma’s death by ceremonially burning down her house.

It’s a well-known fact that every major civilization in history has believed themselves to be living in, or near to, the End Times. Whether it be biblical Armageddon or nuclear war or climate change, the human race has built an entire industry out of doomsaying. Why? Because it’s comforting. It’s egotism on a generational scale. Just as people can’t cope with the idea of their death simply being the cessation of their entire existence, they also don’t want to know that the human race will be continuing unconcerned after they’ve gone. If the apocalypse happens during our generation, then that means we’re the most important humans who’ve ever lived, either because we’re the last ones or because we’re the only ones who could somehow stop whatever Ragnarok awaits.

But this is wishful thinking. The fact is, if 100% of the doomsayers up to this point were wrong, ours aren’t going to be any different. Humanity is too widespread and too disorganized to bring about their own total extinction and the Earth is too small and insignificant to reach the attention of any giant asteroid or murderous all-powerful intelligence. You’re going to die and humanity will tenaciously march on, forgetting about you and the entire world you knew. Your body will turn to dust and you won’t even leave children behind to leave your mark, just a bunch of out-of-print humor novels and an archive of dick jokes that will probably be wiped when the Space Puritans take over. Perhaps even that is egotistical, to think the Space Puritans will consider your dick jokes important enough to censor, and more likely they’ll simply languish forgotten on some disused server forever. And now you’re projecting again. Stop it.