So, with Resident Evil 7 having completely reworked the formula from the ground up, it is now officially OK to like the series again. Many have noted the pattern that the series has now established: keep making sequels until it wears thin enough that the fabric falls apart and exposes the buttocks, then completely rework the gameplay and refocus the plot, then 30 goto 10. Resident Evil 1 was a success, although I never quite saw the appeal, but it worked its formula and convoluted plot to death across two numbered sequels and who knows how many other ones. 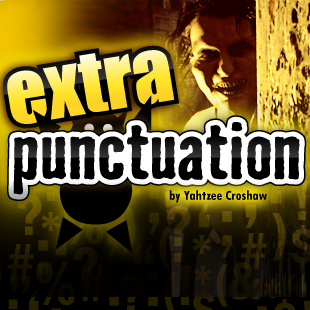 Then of course RE4 was the first one I actually liked, but that new formula was itself worked to death until Resident Evil 6 blew its load completely, with multiple international monster attacks and a hideous snarl-up of plotlines that left Capcom with nothing left to do but start walking it back.

A lot of franchises make the mistake of thinking that each successive sequel needs to be bigger and broader in scope. That’s what we call the Mario trap. Mario Land, Mario World, Mario Galaxy, now what, genius? Making a sequel smaller, but in doing so removing the chaff, getting more concentrated and focused, that’s also an option, and in my experience it tends to work out nicely for a series that’s gotten too flabby for its own good.

What I like about Resident Evil 7 is how it takes the first-person claustrophobic horror thing of your Outlasts and your Alien Isolations but overturns the rather sticky notion that having the ability to fight back inherently makes the experience less scary. That’s not true; a combat-heavy horror game can still be scary as long as it doesn’t feel like winning the combat is helping the main character’s situation. In Silent Hill 2, for example, James can fight, but the only way he can escape from his hell is to confront himself; the monsters he kills are as much prisoners of suffering as he is. In Resident Evil 4, all the Spaniard murder never puts a noticeable dent in their numbers and the main villain doesn’t seem to give the slightest shit how many of his horrors you’ve put down.

So, just to reiterate a question I asked in the review, how do we think Resident Evil is going to fuck it up this time? Well, they could do what Resident Evil 5 did and immediately try to crowbar back in all the tangled bollocks that was the established Resident Evil canon before RE4. A pattern of behaviour I sometimes refer to as “Phew, thought we’d lost it for a second there” syndrome. Sonic the Hedgehog offers another example. It’s largely a river of garbage that flows from a perceived need to appeal to an increasingly strange fanbase not a million miles from the My Little Pony lads, but every now and again they do something like Sonic Colors that reviews a bit better ‘cos it removed some of the bullshit, and that makes them get complacent with the next game and the bullshit goes back in.

Indeed – and here come some spoilers for RE7, so don’t say you weren’t given the heads up – Resident Evil 7 seems to already be falling for that trap before it’s even finished, because a familiar face turns up at the very end. And despite his horrendous trials of the previous night the main character devotes a sizeable chunk of his closing monologue to discussing these dudes who just showed up and how great they are and how he’d totally get a DLC focused entirely on them. Shortly before an advert appears for just such a DLC.

Already the alarm bells are ringing for me, here. Firstly, it rather undermines the stated remit to do something new to finish off with a Deus Ex Machina relating to the stale, pre-existing canon. That business with the ending cameo is going to go off like a damp squib for anyone who isn’t familiar with the series; they’re just going to be wondering why everything abruptly shifted focus right before the credits rolled. It’s a bit of a disservice to Ethan, after we’ve spent the whole game with him watching him suffer in all kinds of needlessly horrible ways. Turns out soldiers were coming to sort everything out so he might as well have not bothered doing anything; just locked himself in a cupboard and waited until dawn.

What’s more, continuing the new style of Resident Evil with one of the established protagonists like Chris Redfield comes with its own problems. The comparison between RE4 and RE7 falls down in one specific area: RE4 was designed to make the combat more effective and feel less completely awful – in doing so being a landmark title in the development of over-the-shoulder third person shooters – whereas RE7 has done the opposite. If anything it’s brought the combat gameplay back to square one by making it as clunky and awkward as it was in Resident Evil 1. That’s pretty inevitable with a first-person perspective, which gives you a reduced field of view right off the bat and makes it hard to navigate obstacles and chainsaw-wielding murderers that are standing too close or just off to the side. And your movement speed is pretty slow to boot.

But that’s OK, because unlike Resident Evil 1, we’re not supposed to be veteran police or military officers – we’re some random fuckwit in a very nicely pressed shirt. Also, we’re building an atmosphere of horror and vulnerability that isn’t getting undermined every ten seconds with a shitty plot and godawful voice acting. If Capcom makes more RE7 with an experienced soldier as the protagonist, and does what RE5 and 6 did by letting the franchise drift back into the realms of bog-standard action shooting, then it’s going to get shit again.

So that’s one way they could fuck it up, but perhaps that reflects a lack of imagination on my part. I mean, they could also fuck it up by dressing everyone up in French maid outfits and adding a restaurant management simulator.