So begins the call of Wizard Dodgeball‘s Interplanar Wizarding Dodgeball league, the fictional sports competition where Wizards from across the multiverse go up against each other in the classic schoolyard game of trying to slam the other team with balls while not getting hit with magic sticky spells or turned into a toad. Well. Except for the magic part. That part only happens in the board game – which, by the way, is currently on Kickstarter.

Whatever. On with the review.

In Wizard Dodgeball, you draft a team of wizard competitors and send them into a no-holds-barred dodgeball arena against your opponent. Maneuvering your wizards in a dance very much like a tactical combat game, you grab balls from the neutral area in the middle of the court and get them back into your side – after which you can throw them at the enemy team to score hits, knock out enemies, and eventually claim victory. Complicating the field is the casting of spells and throwing of attacks, which is all accomplished by rolling unique colored dice and tallying the results. Each wizard has their own stats saying which dice they roll for various actions, as well as a statistic for their movement and how much magic oomph they bring to the team. All of those stats are fairly easy to understand, and which dice are rolled is provided on that wizard’s statistic and portrait card.

In a round, you might maneuver your wizard into position, pick up a ball, enchant the ball with a “fireball” spell, and chuck it at the enemy. When your opponent activates, they’ll do the same with their wizard until you’ve both activated all your wizards – then you simply start again from the top. The game is very much a back-and-forth tug of war, and you balance going offensive when you’ve got lots of balls on your side of the court with going defensive as you toss away your ammunition. Some players immediately adopt a turtle strategy, letting their opponent go for the balls and keeping themselves safe. Others, meanwhile, often grab a ball early and use it to fend off attacks while staying viable threat. There’s always an element of randomization, though, and it keeps any one strategy from really standing out. For example, a spell can always be reflected back on its caster, or a ball can be caught by an empty-handed wizard – eliminating the thrower in classic dodgeball style. 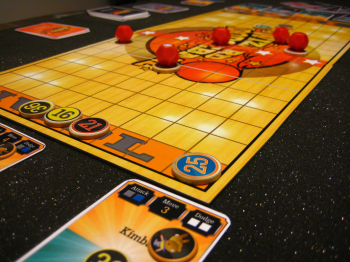 Elimination can lead to a frustrating experience for some players, as a run of bad luck can lead to a rapid loss of players where you lose rapidly and have little chance of fighting back. On the other hand, that same element of chance can lead to amazing did-you-see-that sports moments, like a lone surviving wizard catching two balls in a row and evening the odds thanks to a lucky stickyfingers enchantment. The game also has several variants, with a play-to-points variant keeping wizards knocked down out of the match for a turn but putting them back in play after they’re hit – playing, we preferred it a lot more to the standard game, though it does extend playtime by fifteen or so minutes on average. (For a fun twist, be like my sadistic middle school teacher and make the player in question do five push ups to get their wizard back in the game.)

There’s a lot to love about the game, but that’s not to say there aren’t things to dislike. For many, randomization will make or break this game. Likewise, that a losing team can go into isn’t particularly fun to play. It’ll be up to you whether those are things that make this a no-go or that bring this game above the pack into your list of easy, frequent game night picks.

While sports games aren’t many gamers’ thing, I can’t overstate the rush of odd nostalgia I had with Wizard Dodgeball. While many won’t like the theme, I’d say it’s actually second fiddle to the mechanical workings, and it’s hard to complain about mechanics as thoroughly tested as dodgeball. It simultaneously scratches the same tactical itch as many other games while still giving a less violent, fast playing, middleweight game that can fit in nicely among others of its type or serve as a gateway game to more tactical play. It has a low learning curve, decent playtime, and we got about five games before we shelved it for others for a while. For those with a spot in their collection where a whimsical game would fit, those looking for a lighter tactical experience, or those with clever kids after a tactical experience, Wizard Dodgeball is a sure hit.

If you’re interested in Wizard Dodgeball, it’s available via Kickstarter.

Bottom Line: While it can take frustratingly random turns, Wizard Dodgeball rewards repeated play and is a blast for casual gaming.

Recommendation: Lovers of games like Blood Bowl and Kaosball shouldn’t miss Wizard Dodgeball, nor should those with younger players around.