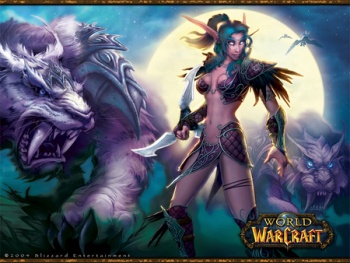 In a stunning display of absolute idiocy, an 18-year-old Indiana boy announced his intent to hijack an airplane while playing World of Warcraft.

There are a lot of stupid things you can do while playing WoW. You could forget to dismiss your Hunter pet before jumping off a ledge, pulling an entire dungeon’s worth of enemies to your party. You could spend six thousand gold on the Auction House for the wrong item. You could accidentally attack a boss while your raid was preparing for the fight, getting everyone killed. These are all stupid mistakes WoW players have made in the past.

And then there’s using the game to publicly announce your plans to commit an act of violent terrorism. That’s a very special kind of stupid right there. One might even call it astoundingly idiotic.

The 18-year-old from Johnson County, Indiana, said that he “was going to board a plane at 7:30 to Chicago and that (he) was going to try and kill as many Americans as possible,” reports Destructioid. Apparently, the moron in question repeated this claim more than once, which I imagine is similar to smashing your foot with a sledgehammer, then repeatedly doing it over and over again to see if it’ll still hurt.

Predictably, Blizzard employees saw the announcements and notified the proper authorities. The teen quickly backpedaled, claiming that someone had hacked his account, but that didn’t stop the FBI from seizing his computer to investigate the incident further.

In all seriousness, what the hell did he think was going to happen? Did he think that everybody would respect him for being edgy? That they’d see him in Dalaran and fearfully whisper, “Oh hey, there’s that badass who said he’d be a terrorist in real life” to their friends? It’s hard to even fathom the mindset of somebody who could not foresee just how spectacularly this would backfire.

Ten bucks says he was a Blood Elf Death Knight.

Remedy: No Alan Wake on PC Unless Microsoft Says So