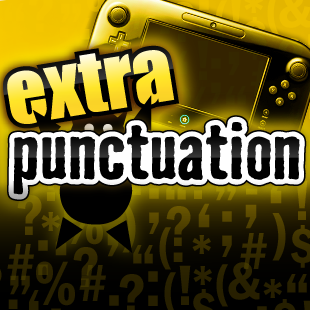 Even I’m surprised that I got through an entire review of a Wii U game without ragging on the screen controller last week, in the Xenoblade Chronicles X-ploration. And you know what? It’s because it’s well-used. Nothing really to complain about. In fact, I might go as far to say that it’s the first Wii U game I’ve played that actually found a decent use for the thing.

Let me quickly go over the selection of Wii U game boxes on the shelf to my right to see if I’m correct. Hm. A lot of the time the screen controller is barely used so that you can do that thing where you transfer the whole game to the controller because normal, competently socialised people want to use the TV.

At other times the screen controller gets used mainly as an inventory or map screen that can be displayed without the main screen having to cut away from the action, or be partially covered by a minimap. But I’ve never had a problem with having to go to a pause menu for the obvious reason that you can’t look at two screens at the same time anyway. And as for minimaps, televisions are large and terrifying enough that a few square inches can quite easily be spared for such purposes. It’s certainly not enough to justify inventing a whole new kind of controller.

Otherwise… oh hang on. Game & Wario. Yeah, that found some good uses for the screen controller. I particular like that one minigame where you’re trying to play on your handheld in bed without being spotted by your mum. Not so much that other one where you have to deflect arrows by waving the controller about like a twitchy Westboro Baptist Church member waving a placard at a soldier’s funeral.

So I’ll give them that one. I’ve played two games that have made decent use of the screen controller in the four years since the Wii U came out. But what do I think Xenoblade Chronicles X does well with it?

I think you could add a new level of challenge that would really speak to those smartphone-addled fuckwits.

For the most part, the screen controller is used as the map. But here’s the important part – it can also show you the map of areas you’re not presently in. You can idly pick through the maps and recon the next area you’re going to visit. Importantly, while you’ve got the map open, you can tap on important areas to get information on what characters hang out there, if there’s a sidequest available, and what the prerequisites for starting it are, without having to traipse over there in person. You can also, on the world map, manage your probes to adjust your mining and tourism income.

All of which you can do live as your character does whatever they’re doing on the main screen. You can be making plans and tracking down NPCs even as you stand around working your trousers out of your bum crack waiting for an elevator, or even sometimes during loading screens. And it works for Xenoblade Chronicles because this is a game where you have a lot of activities to manage. On a moment-to-moment basis you’re some twat dicking around a field having stand-offs with unimpressed gorillas, but on a broader level you’re investing in futures, building relationships with characters and juggling any number of fetch quests.

Essentially, it is a game with a detailed enough world that you can kill a boring moment by cocking about with your in-universe smartphone. And if you ask me, they should’ve run with it further. Why do we need to come, in person, to the various booths in the hub city to use their menu-based functions? There are booths for selecting quick missions, for investing in local companies, for collecting squad rewards (whatever that means), and all of that could be done remotely. Is there any reason we need to come to shops in person to buy new equipment? Why couldn’t we browse an online catalogue and buy things on delivery, to pass the time while some NPC in the overworld drones on about saving his tribe or whatever? It would mean not having to keep coming back to the hub city to hear the same bloody music tracks over and over and over again. 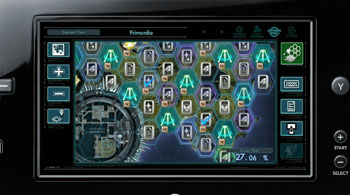 And then there’s character missions, in which you team up with specific party members and complete personal quests. You start those by tracking down the character in question and having a conversation that establishes the problem, but again, we could easily be doing that while we do something else, via text message. “what u doing” “nothing much stuck in boring mission briefing” “wanna come over and help find my lost cat” “sure” “kk bring doritos”. Suddenly it’s much more relevant to the new generation of millennial shitheads.

I think you could add a new level of challenge that would really speak to those smartphone-addled fuckwits. It’s just a matter of having the option to automate a few things. Maybe set your character to automatically run to your selected destination while you sit back, text your mates and play relevant meta-games where you do things like take photos of passing creatures and post them on Twitter, receiving new followers based on the quality and framing of the pictures. You could also set up the game to automatically fight random battles for you throughout the journey, since very little actual strategy is required when you stumble on random lower-level animals. Let the inevitable victory play out while you check your stock options.

But then the challenge comes in that the distribution of high-level monsters is almost entirely random, so it would be very easy, while playing Flappy Bird as you jog across the rolling hills, to not pay attention and accidentally walk into the leg of a level 90 space brontosaurus. The intention being to teach the lesson that the world of online distraction can never replace the world that’s physically around you, because the latter is the one where your head is getting stomped into bouillabaise.