This might sound like me hyperbolically overstating things for comic effect again, but if you claim to have enjoyed playing Final Fantasy XIII, then you are wrong. Because I don’t think you can use the word ‘playing’ in this context. Final Fantasy XIII is more like something you ‘watch’, or ‘are subjected to’. For the lion’s share of the game the only real input the player has is during battles (and even that’s a loose and uninvolving input), or when using that bloody stupid crystal level-up system, which is probably the most unnecessarily bloated and blinged-up system of its kind I’ve ever seen, like a diamond-encrusted flowchart tattooed on the stomach of a fat eunuch.

So saying that you ‘play’ FFXIII is like standing in the middle of a river and claiming to be the all-powerful master of water. No, you’re not, you’re just an idiot with wet trousers. The only way you could ‘play’ FFXIII is as a drinking game: take a drink whenever a character makes any vocalization that isn’t a word. That’s any grunts, sighs, giggles and mumbles. And good luck making it through any scene featuring Vanille.

Just to reiterate what I said in the review, I didn’t always hate console RPGs. But ever since Final Fantasy 7, the series – and its various imitators – has generally been sliding towards being nothing but extended showcases for art and costume design, with a spicy undercurrent of blatant fetishism (which gets decidedly icky when underage characters are involved – and I don’t care what any official media says, if Vanille is over 16 I will suffocate myself with a miniskirt), even though the designs being showcased don’t make the slightest bit of sense. Why, exactly, are oppressed train passengers bound for death camp gulags all wearing spotlessly clean outfits dreamt up by axe murderers who have slipped their leashes and attempted to escape through a clown factory?

But it wasn’t always like this. Let’s look back on some turn-based RPGs I’ve had nice things to say about. This may be a short column.

Final Fantasy 6 (or Final Fantasy 3 if you can’t count) on the SNES was mentioned in the video, and was the last fully 2D Final Fantasy (going by the main series, disregarding all those handheld spin-offs). Despite or possibly because of the low-res art, the chibi-style characters managed to show a lot more life and expression than any of the frowny uncanny valley monstrosities of future games. The story, crucially, was easy to follow. None of that ‘dream of the fayth’ or ‘smashing together past and future like pillowy breasts in a granite wonderbra’ bullshit – just a rag-tag group of assorted heroes up against a demented villain who wants to blow up the world because he feels like it. But while straightforward, the plot was told in a grandiose, almost operatic fashion in a clean, well-designed world. I’d like to see more games have the balls to have an apocalypse half-way through. 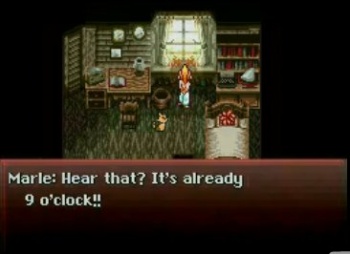 Speaking of overcomplicated stories, Final Fantasy (even 6) has this annoying habit of using ‘in medias res’ all the time (read: having the game start with the story already underway without even telling us the name of the fucks we’re controlling until half an hour in, so we don’t get to see any character growth until the inevitable flashback later on and until then just have to take the game’s word for it that, no really, these characters are totally well developed guys) which isn’t always a bad thing, but I still prefer Chrono Trigger‘s approach.

You’re an ordinary shlub waking up on a normal day, and by the end of it you’re embarking on a fantastic adventure through time and space and saving the world from cosmic horrors, usual business. It also had a combat system wherein you actually fought enemies in the same area you encountered them in, rather than going to some flashy screen transition and having you battle in some mysterious astral plane based vaguely on your current surroundings, which always strikes me as being as flowy and natural as digging out your own teeth with the back of a spoon. I have to admit that I’ve never completed Chrono Trigger, though, because after a certain point boss fights start taking upwards of a dull half an hour to complete, and I could be using that time to play something consistently fun, like:

Earthbound (aka Mother 2) is probably the most eccentric game of its kind, but its warped sense of humor makes it at least intriguing even to the staunchest RPG hater. It’s your standard plot, rag-tag youngsters versus God, but set in a cartoonish Charlie Brown-esque world where noodles have resurrection properties and you are expected to beat down evil sentient roadsigns with a frying pan. Now, most of the games listed here have enter-your-own-name systems that are ripe for hilarious abuse, but none more so than Earthbound. As well as main character names, the dog’s name and the name for your most powerful attack, you also provide your favorite food, and it was something of a rite of passage for young gamers to figure out that entering ‘Vagina’ would cause the main character’s mother to request that he perform a debased sex act before going to bed. Earthbound was so good that the Japanese decided to jealously hoard the sequel, Mother 3, refusing to export it to English-speaking nations. You can get a fan translation though (but you didn’t hear it from me).

So far, so SNES. Here we move into the previous console generation with Paper Mario: The Thousand Year Door on the Gamecube. I’ve always appreciated Paper Mario for its rich and slightly anarchic sense of humor, but the second title in the series is probably right up there in my top three Gamecube games. It’s full of a great variety of levels, from an Orient Express-style murder mystery to Mario’s short-lived professional wrestling career, tied together by a colorful world of unique character and depth. It seems that one of the best ways for a turn-based RPG to impress me is to not take itself seriously. I guess that makes sense. Turn-based combat is by nature a bit silly. Taking it in turns to kick each other in the nuts might be fair, but if all that matters is victory then there’s no reason you couldn’t, say, jam a pitchfork in the other guy’s head while he rolls initiative.

I could answer one of the several bazillion comments that followed my FF13 review, but frankly the thought of going through them all makes me want to scratch my own arms off. Instead, I’ll just mention that Mogworld, my debut novel coming this August, is now available for preorder from Amazon.com! Beat the rush to give me money!