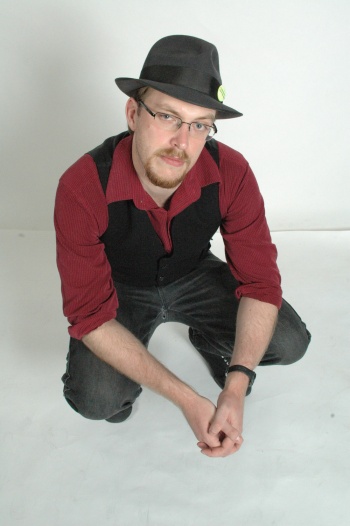 In my recent Prototype Vs. InFamous video you may remember that I found myself unable to honestly call either game the best. Both were stronger in individual areas – Infamous wins on story and side missions while Prototype wins on combat and dick potential – but overall they balance each other out. I wasn’t satisfied, though. There has to be a winner, if only to decide which name to read out first when giving out the joint prize. So at the end of that video I suggested an unbiased tie-breaker that could be kept unaffected by actual game quality. Namely, which of the two studios could produce the best image of the rival game’s main character wearing women’s lingerie.

Well, imagine my surprise when representatives from both Sucker Punch and Radical announced their intention to take this final showdown seriously. So, without further ado, let’s set out on this visual odyssey, and never speak of it again. 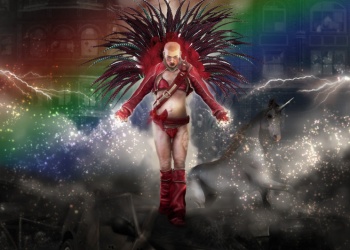 Here’s the entry from the Prototype team. They actually hedged their bets with two submissions, the big fat cheats, but in the interests of fairness we’ll only count one. Click here to view the other if it’s that important to you, but I felt this was the stronger of the two.

Of course, I use the word ‘stronger’ guardedly. I wonder if whoever created this went through art school. I wonder if at the time they ever saw themselves using their talents this way. Anyway, Radical felt that the stipulation of ‘Cole McGrath in a woman’s bra’ was open to interpretation, and decided instead to go for ‘Cole McGrath after getting drunk and falling into the dumpster behind a burlesque house’.

I’m sure I could have gone the rest of my life without knowing what Cole’s pubes looked like, or indeed his potatoey thighs, on one of which he appears to have a birthmark in the shape of Marilyn Monroe’s face. Still, I like the fact that he’s using his lightning powers to make magical glitter sparkles, and the unicorn is a nice touch, especially the fact that it seems to be mid-way through a confused double-take. 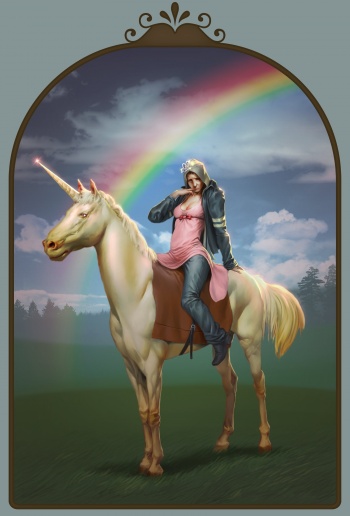 Now, let’s take a look at the InFamous team’s entry, and… what’s this?

Okay. Radical. Sucker Punch. I’m not angry. Just own up. Which one of you copied the other’s homework? I find it hard to believe that you’d both independently interpret ‘woman’s bra’ to also incorporate a rainbow and a slightly embarrassed unicorn. Also note that both characters are using their respective superpowers to express their feminine sides, as we can clearly see that Alex has shapeshifted himself some very lovely titties and a pair of child-bearing hips.

But then again, these are the same teams who both independently created sandbox games about superpowered assholes, so I guess it’s not just GREAT minds that think alike. And just like the games themselves, despite the individual elements they’re not that similar. Sucker Punch’s image looks like it could be the cover of a romance novel, while Radical’s image has more of a ‘flyer found in a Vegas telephone booth’ feel to it.

Oh yeah, that. I’m tempted to declare it a draw again and run another tie-breaker based around, say, which team sends me the most money. But I hate to shilly-shally and I’d really like to get on with my life and attempt to forget about Cole McGrath’s hairy midsection.

It’s a close call, but I’m going to declare Sucker Punch the winner by one lovingly-rendered pair of breasts. Also their unicorn is a much prouder, mightier steed, and Alex’s expression is delightfully coquettish. Therefore InFamous must be the better game. Buy InFamous. Prototype‘s still good, though. Buy it as well.

Thanks to Radical Entertainment and Sucker Punch Productions for being such good sports. You sick, sick fucks.

See a new Zero Punctuation review each Wednesday only at The Escapist.