Potent warriors empowered by ancient spirits and gods, each a trained disciple of their respective martial art, contest to see whose abilities are greatest. That’s the pitch for Yashima: Legend of the Kami Masters, the latest from Greenbrier Games and now funding on Kickstarter. It’s a miniatures Skirmish game calibrated for two to four player free-for-alls, incorporating quick and easy to understand card-driven mechanics with tactical positioning. The design goal for the game was to avoid the common pitfalls of unfun player elimination and extended game time, and in the hour-long demo time I had with the game that was completely true. See, in Yashima, defeat is just the beginning of your battle – though the game only continues until one player is undefeated. 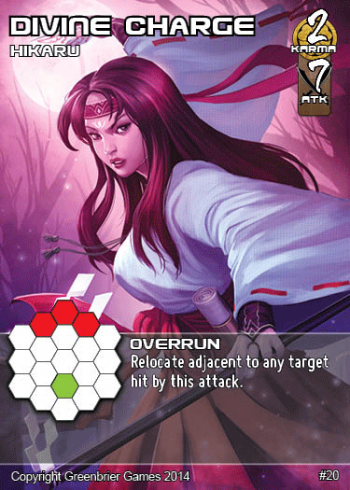 Every player in Yashima has a character composed of two elements: Their Kami Master and their Kami. The Kami Master is a warrior with a unique fighting style, while the Kami lends a suite of spiritual powers to the Master. Each is represented by a unique deck, and the two decks are shuffled together to create the character you’ll be playing – it’s a simple and fast way to get down to play, and reminds me a bit of Smash Up in its expandability. For example, during my hands-on time with the game I played a fire sorceress with the phoenix Kami. The phoenix was a relatively durable character with some close blasting powers, while the sorceress was empowered with a suite of ranged and area attacks. The combination was pretty versatile, and managed to do well in any situation. Meanwhile, an opponent had an up-close melee axeman and a dragon Kami, making him a potent danger in melee but avoidable at range. There’s always a danger that with a mix-and-match game there’ll be a few bad combinations that aren’t worth fieldind. Yashima doesn’t seem to care, and the game focuses on speed and fun – the in-the-moment tactics – over the deep strategic planning of army building or character customization.

One of the most unique mechanics that Yashima uses is an action bidding system whereby the players choose the pool of actions available to every other player that round. Each round the players put in a move or an attack token, forming the pool which everyone chooses from. If everyone puts in move, nobody’s attacking that round. If everyone puts in attack, well, you get the picture. It’s a weird system, where if you think you’ll go first you might try to put in a move so that you can deprive your opponent of the ability to hit back. It was a little strange in a duel scenario, but fascinating tactics and inter-player politics emerged when there were three or more players on the field.

Each players’ deck is their suite of powers, their defensive cards, and also their health. When a character is damaged, unless they can play out a card to defend themselves, a certain number of cards come off the top of their decks. Characters always have facing, as represented by their miniature on the hex grid, and each attack card shows which hexes are hit based on where the character is facing. Facing also plays into defense – getting attacked from behind is never good, for example. 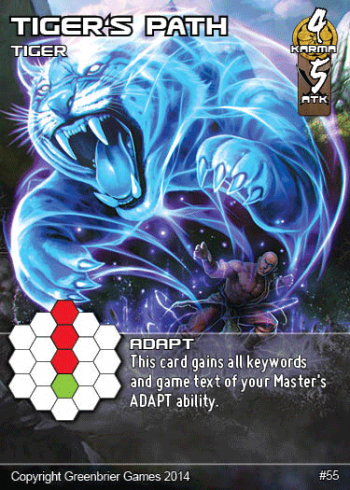 The other major mechanic at work in Yashima is the spellbook that each character uses – a tome of powers that change based on which page is open. As you spend turn actions to turn the pages of your spellbook, you unlock deeper and more powerful abilities you can use in addition to, or that modify, the actions in your hand of cards. Each turn you can advance your tome or do one of a number of other actions that boost the power of your attacks and defenses, lending an element of planning to the game’s otherwise turn-to-turn tactics. Do you speed ahead in your book for powerhouse abilities, but make yourself a target? Or do you empower yourself in the short term, hoping that those who’ve enhanced their abilities will get taken out first?

By far the biggest selling point for Yashima, though, is that like any good Anime character your warrior just refuses to stay dead. When knocked down to zero cards, you return more powerful than ever the next turn. By flipping over your character card, your character’s statistics increase, and though you’re now ineligible for victory you’re now the kingmaker on the battlefield. Avoiding powerful foes while trying to take down your remaining living opponents adds a hugely fun social aspect to the game, encouraging you to kick butt – but not too much butt, lest your enemies come after you when they return. Games could also be customized to a certain number of eliminations, ending when someone has died a certain number of times – with those who’ve died the least claiming victory – a variant I can see gaining fast favor among players.

The game did have some frustrating elements, with a certain amount of randomization based on the cards you were pulling determining how effective you could actually be on any given turn. It’s likely going to be more of a filler game for hardcore miniatures tactics players, but slightly more casually competitive players will have a game they’ll enjoy. Yashima is on Kickstarter right now. Its funding campaign ends October 14th.