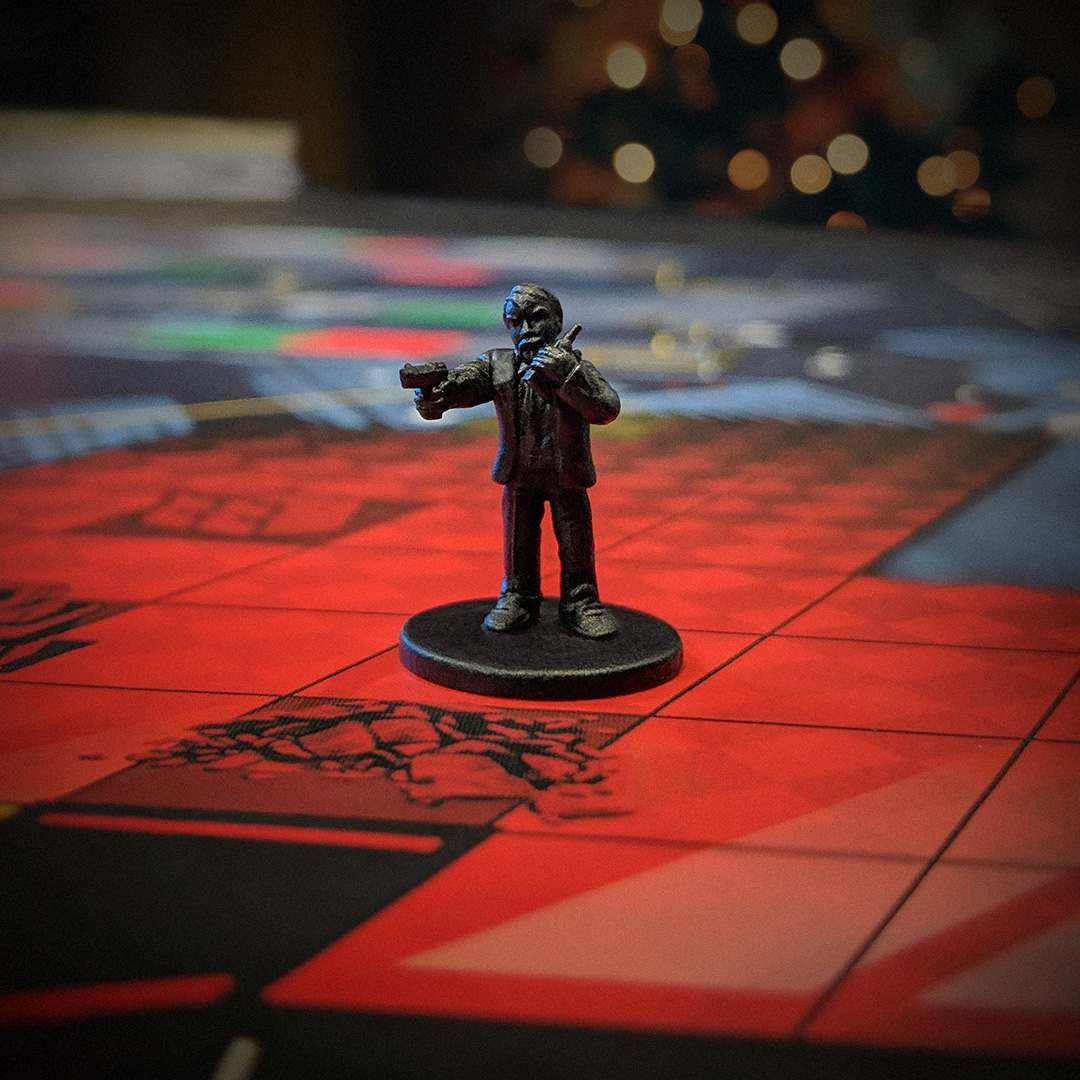 There have been eight video games based on the Die Hard films, but the landmark action series has never had a tabletop adaptation until now. USAopoly’s Die Hard: The Nakatomi Heist Board Game will be available this spring and will let one player take on the role of John McClane and attempt to save the high rise’s hostages while the rest of their friends play thieves in Hans Gruber’s crew.

I interviewed lead game designer Pat Marino and senior game designer Sean Fletcher about the challenges of making a Die Hard game and what players can expect.

How did USAopoly wind up making a Die Hard game?

The design team is a huge fan of the original film and had been tossing around the idea for a while. After a lot of brainstorming, we finally thought we had a concept that could turn the original Die Hard movie into a really cool tabletop experience and pitched the idea to Fox Consumer Products, who we’ve actually been working with for more than a decade. They liked the concept and were excited to give fans a nostalgic trip back to Nakatomi Tower, and thus Die Hard: The Nakatomi Heist was born!

How are you trying to translate the movie’s themes to the game?

It is an incredible film with such an avid fanbase, so our top priority was really capturing the essence of Die Hard in the game. In the movie, John has a humorous self awareness throughout all the action, and we’re confident that the game has the same spirit. It tells the story in a way that retains the film’s dramatic tension without taking itself too seriously. We focused on everything people love about Die Hard, baking many story points, quotes, and moments that resonate most with fans into the gameplay like John and Gruber’s most entertaining lines and the shoes not fitting McClane. Even the quad-fold board game is a nod to the different story arcs in the film. The theme is overtly Die Hard, but the hardcore fans will really appreciate the more subtle Easter eggs also sprinkled into the game.

How did you settle on making the game one vs. many?

We knew that people would want to play as John McClane, but we were just as excited about the bad guys. Hans Gruber is a mastermind and put together a complex team of thieves with different skills, and we wanted to represent that in the game. It only felt right that the thieves in Die Hard: The Nakatomi Heist should work together as a team, so we decided to have it play out as a one vs.many format. It creates a really fun player dynamic as well as accurately characterizing the film.

Will the thief players be taking on the roles of specific characters like Hans Gruber or generic thieves?

All playable thieves are part of Hans Gruber’s team. We wanted to stress the collaborative nature of the game, so we designed Die Hard: The Nakatomi Heist in a way that all thief players can take control of any of the thief figures on the board.

Do you think the game is balanced to be more likely to favor John McClane or the thieves, or do you feel like both sides have an equal chance of victory?

While fans know that McClane is ultimately victorious, we obviously didn’t want to have a set conclusion for our game. Instead, we focused on capturing the tension leading up to that moment. McClane faces many close calls from start to finish, and we wanted our game to play out similarly. We put Die Hard: The Nakatomi Heist through the playtesting gauntlet to keep the balance true to the film. While we have made McClane feel powerful, just like in the film, his victory is far from certain. We’ve found that success for either side really boils down to the last couple decisions.

Why do you think it took so long for Die Hard to get an official board game?

There is so much passion behind a popular IP like Die Hard. People say it’s the greatest action movie of all time or that it has perfected the action movie format, so there’s a lot of pressure from fans and us to do it right. Because we have been creating licensed games for more than 25 years, we understand the importance of quality and immersion. Sometimes it takes a while to create a concept that meshes perfectly with a property, and sometimes it takes a bit of time to develop and translate an idea into an entertaining tabletop experience. With an IP like Die Hard, our top priority was just doing it right.

If the game is successful do you think you’d make board games based on other films in the Die Hard series?

We currently do not have any sequels planned, but we are certainly open to the idea should the players want it. We’ll have to see how the fans react when Die Hard: The Nakatomi Heist launches this spring!