Developed by Level-5 and published by Nintendo. Releasing on November 6, 2015. Available on Nintendo 3DS. Review code/copy provided by publisher.

Yo-Kai Watch begins with an opening cinematic complete with its own theme song. A bouncy pop tune that will feel like every school-age-child-suddenly-surrounded-by-monsters anime from the early 90s. Slightly less Pokemon, slightly more Monster Rancher, but it’s a very familiar journey, in which a child who should be free to run and play outside is instead presented with a revolving life that’s endlessly encumbered by the strange spirits around him.

Like many of the Saturday morning anime titles that Yo-Kai Watch resembles, there is an unbounded energy flowing from every scene transition, puzzle, spirited dialog chain, and interaction. The whole game is an unreserved bundle of jubilance and joy that bounces throughout the narrative, and that kind of energy is infectious for its players. Despite some of its flaws, Yo-Kai Watch is joyful, more than a little childish, but very endearing for it. 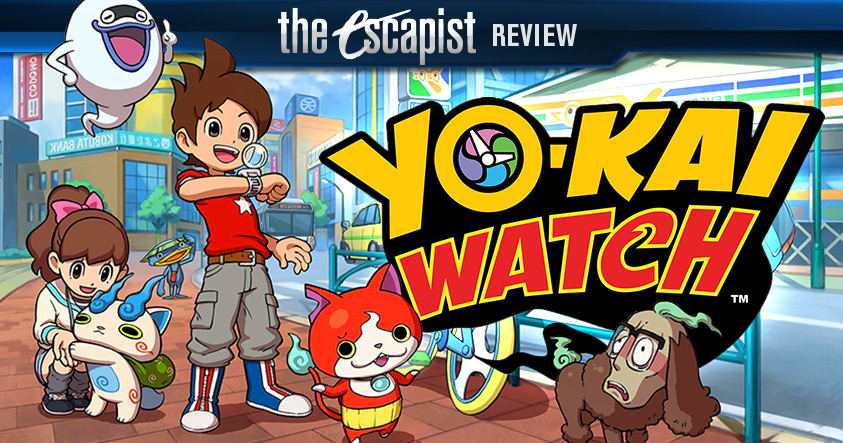 Building that enjoyment is a wonderful art style with tons of attention to detail. Level-5 games are almost without exception beautiful in motion, and Yo-Kai Watch is an unquestionably stylish game. Accompanying the pretty visual style is a lively soundtrack, that manages to make even the dark brooding environments feel light and enjoyable, despite effectively chasing ghosts through dirty urban environments or buildings devoid of life in the dead of night.

Otherwise, Yo-Kai Watch doesn’t deviate much from the formula familiar to the collection-style RPG system. The protagonist, a young boy named Nate or young girl named Katie, will stumble upon an old capsule machine just outside of a local temple. Upon following the directions of an unearthly voice that tells them to feed the machine, a friendly-if-obsessive yo-kai named Whisper will promptly begin following them around, giving them information about the various yo-kai that they will run into on their adventures and commenting about the various sidequests that appear throughout the town. He will also give them a yo-kai watch, a timepiece capable of revealing the various yo-kai hidden throughout the city. 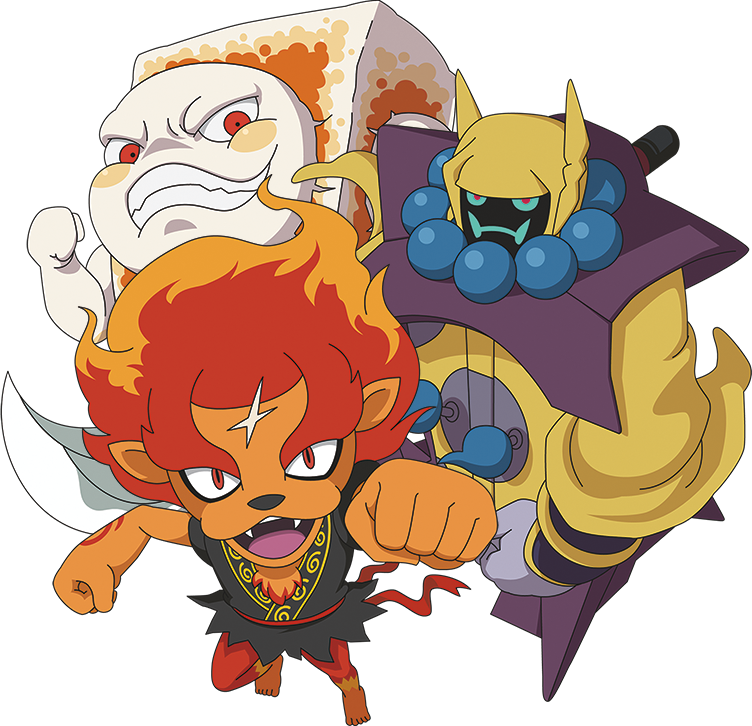 Once Nate or Katie have the misfortune of being able to see the yo-kai, their lives become non-stop whirlwinds of dealing with the spirits throughout the town. Every day becomes an adventure in resolving various problems the yo-kai create. They’re ultimately harmless in the grand scheme, making people excessively hungry, petulant, selfish, or forgetful, but the constant low level troubles that the yo-kai inflict become a full time job for the protagonist, who ends up chasing around town constantly in an attempt to catch up to the constant influx of yo-kai that stir up problems across Springdale. Once they reach their end-point, the yo-kai they chase will usually opts to fight, and combat will follow.

Despite being somewhat familiar to long-term fans of the various monster collection RPG genre, combat in Yo-Kai Watch puts an interesting spin on combat. Instead of making the player make constant decisions about which moves to use, the various yo-kai that fight in the player’s stead operate largely autonomously, using one of their three moves every couple of seconds, and will likewise pick which of the enemies to strike unless they’re directed by the player. While combat is on-going, the party builds a Soul Meter, a small wisp icon next to their name that when full, give the player the option to unleash their big attack against one or more opponents. These Soultimate moves are triggered by the player, vary from yo-kai to yo-kai, and tend to be high-damage attacks or debuffs against enemies. The Soultimate moves are the biggest way the player will interact with the battle, and are often the most strategic part of combat for the player.

Aside from the Soultimates, combat has a front and back row of combatants, which the player can spin to switch which three creatures the player has in active combat. The back row is a place of safety that the enemies cannot target, making it an ideal place to dispell debuffs – called being inspirited – or heal yo-kai on the cusp of death’s door. However, if a yo-kai has been inspirited or killed in combat, they will be back to fighting shape as soon as the player is out of combat, so healing and purifying inspirited yo-kai is less of a concern than in other RPGs, which simplifies the amount of menu hopping and item management that would normally be found in a game of this sort.

However, there are still levels of complications, in which the various yo-kai have character traits that mean they might loaf around from time to time in combat, skipping turns, or perhaps take more critical hits than other yo-kai due to carelessness. These aspects don’t have a huge effect on combat, given how fast combat comes and goes, but does give you many options for changing these personality traits via books if they want to maximize their team’s potential.

If a player is successful in combat, enemy yo-kai can sometimes approach the player with the offer to become a friend, allowing their use in future battles and quests. These chances are improved by feeding opponents their preferred foods, or simply worn down by repeated battles against enemies of the same type until one approaches regardless. For completionists, this can be a headache due to no simple item that works across the board for befriending all monsters, but in-game, it mostly means that players will switch their party mostly due to storyline monsters rather than the odd, increasingly rare friendly enemy as they travel further into the game.

Although combat is enjoyable, and frequent throughout the narrative, there isn’t a great deal of Yo-Kai Watch that goes further or aspires to more. It isn’t the sort of game that will push the envelope much. Despite having a keen attention to detail and a wonderful aesthetic style, the game isn’t anything that’s too big a departure from convention. Combat is fast, a little bit unique, but doesn’t really feel profoundly rewarding because of its lack of technical aspects.

The story is endearing and full of child-like wonderment, but plagued by fetch quests. The constant running hither-and-yon at the beck and call of so many monsters becomes tiresome, even despite the high-energy style throughout. The yo-kai themselves are likewise interesting, but more than a little silly. One has a butt for a face, whose attacks are all fart jokes.

It’s a game about a child that will work very well for children, but probably won’t have the spark of nuance and complication to capture the adult players as much.

Bottom Line: Yo-Kai Watch is a good variation on the monster collection genre of RPGs that will definitely please fans and earn a few new fans, but has just enough tiresome elements to keep it from being great.

Recommendation: Despite it all, it’s a hard game not to recommend. Cheery, colorful, and interesting, it’s an easy pick for anyone who likes RPGs and Saturday morning cartoons.