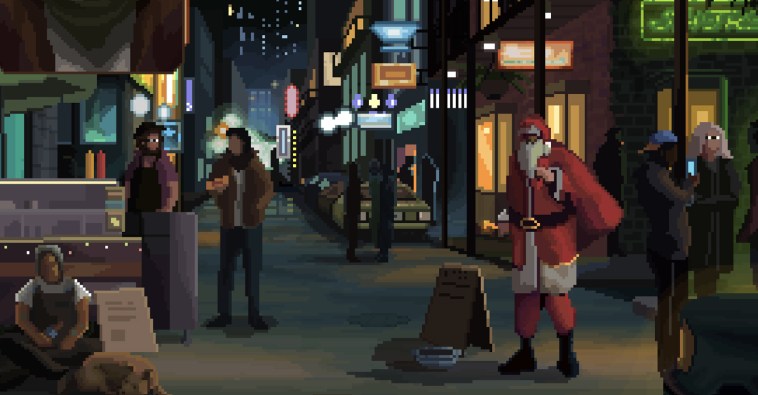 This article contains minor spoilers for the early game and an optional interaction involving a hot dog in Norco.

Point-and-click sci-fi adventure Norco is brimming with exciting mysteries, cogent observations of the effect of industrialization on communities, and some of the funniest writing in any medium of the past year. One interaction early in the game, with a brief side character, encapsulates the bleak hilarity you’ll come across in the beautifully rendered southern gothic setting of Norco, Louisiana.

You play most of the game as Kay, a drifter who comes back to her hometown of Norco, years after her mother’s death. But the absurd story about a hot dog happens in one of the flashback sequences in Norco where you solve a puzzle as Kay’s mother Catherine at the end of her life. None of the game’s puzzles are particularly complex, but the cast of characters and gorgeous pixel art motivate you to fully explore every available area and talk to everyone you can, since you may overhear something important.

Catherine has to gain access to the store The Curious Duck for instructions from her mysterious employer, but first she has to convince someone to buy a pricey and extremely expired hot dog from a vendor, described charitably as “vague meat.” After sitting through a bizarre puppet show held under a highway overpass, you’ll meet a hungry NPC, known only as “Showgoer,” who will eagerly head to the cart and order one, allowing you to progress. 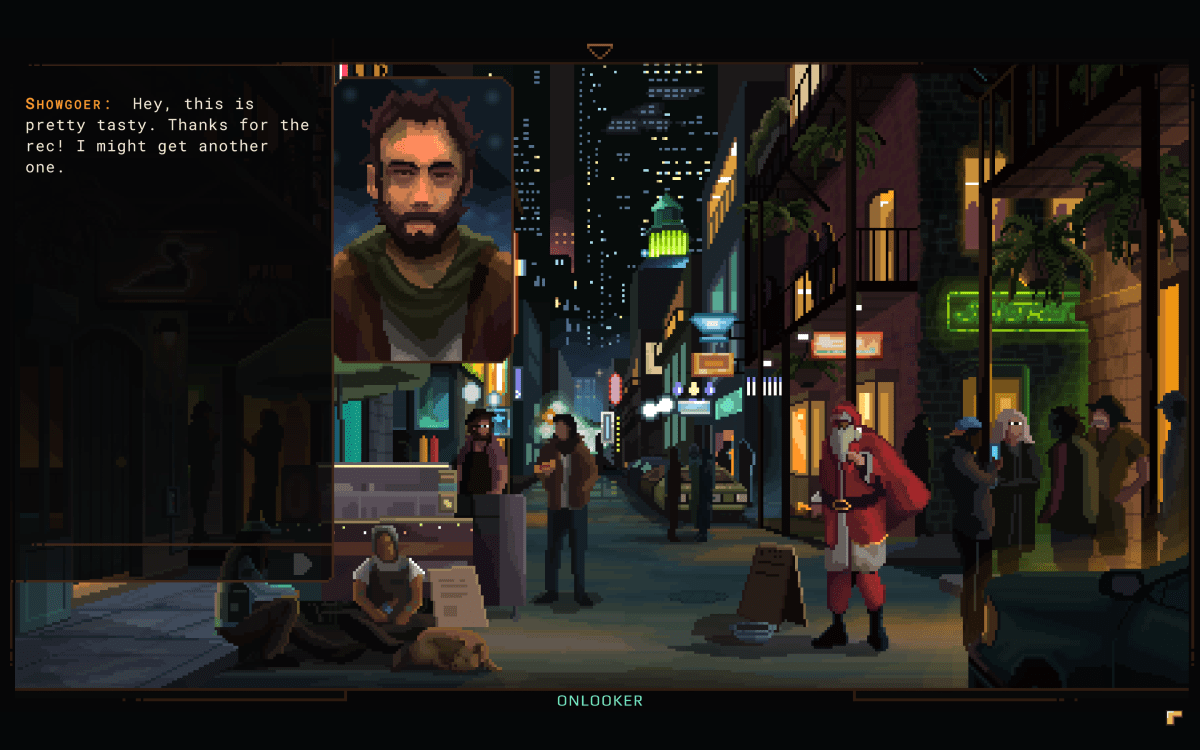 When you return to Catherine’s mission in the second act, later on, you may notice the same puppet showgoer outside a concert venue, and the ensuing conversation is the hardest I’ve laughed at anything in 2022. Unsurprisingly, his meal caused some stomach issues, and the showgoer recounts his efforts trying to find a bathroom, which included sneaking into a limo to relieve himself and continued to unravel into something even more surreal than explosive diarrhea.

This story would have been funny enough, but the showgoer also berates the player for even wanting to hear it. He’ll pause at multiple intervals as the story gets more depraved and worse for him, forcing you to keep asking him to continue. “You give me bad vibes, you know that?” he’ll respond after your third or fourth dispassionate “Continue…” if you choose to keep listening, but the faint of heart are able to opt out at any time. 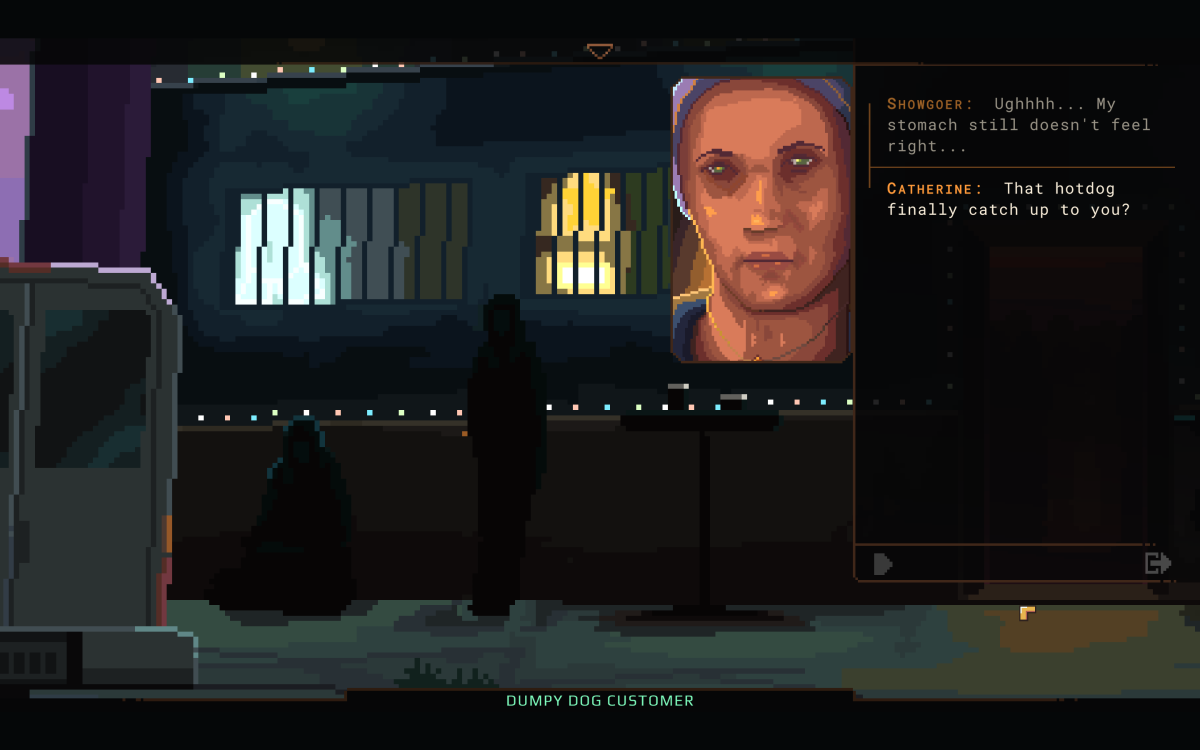 This moment caught me off guard because I’m so used to just clicking through every option in a dialogue tree to get all the information I need with little recognition of that process from the NPC, which can cause even well-written interactions to feel more stale and stilted. It’s only a slight quirk in the writing here, but it totally recontextualizes how you feel about these characters and dialogue moments for a second. That slight amount of pushback from an NPC in response to a dialogue choice was a fun moment of humor and discomfort I haven’t often felt in game writing. Catherine leaves the interaction giving her victim a feeble apology, and he blithely says back, “Yeah, well. Hot dogs.”

And the hot dog story isn’t the only time you’ll laugh out loud through the runtime of Norco. You may go into this game expecting nothing but dark dystopian machinations and miserable souls caught up in them, but the frequent moments of humor and warmth compel you to keep exploring this world. Norco is darkly emotional, and the levity helps to make the gut punches in the narrative even sharper. 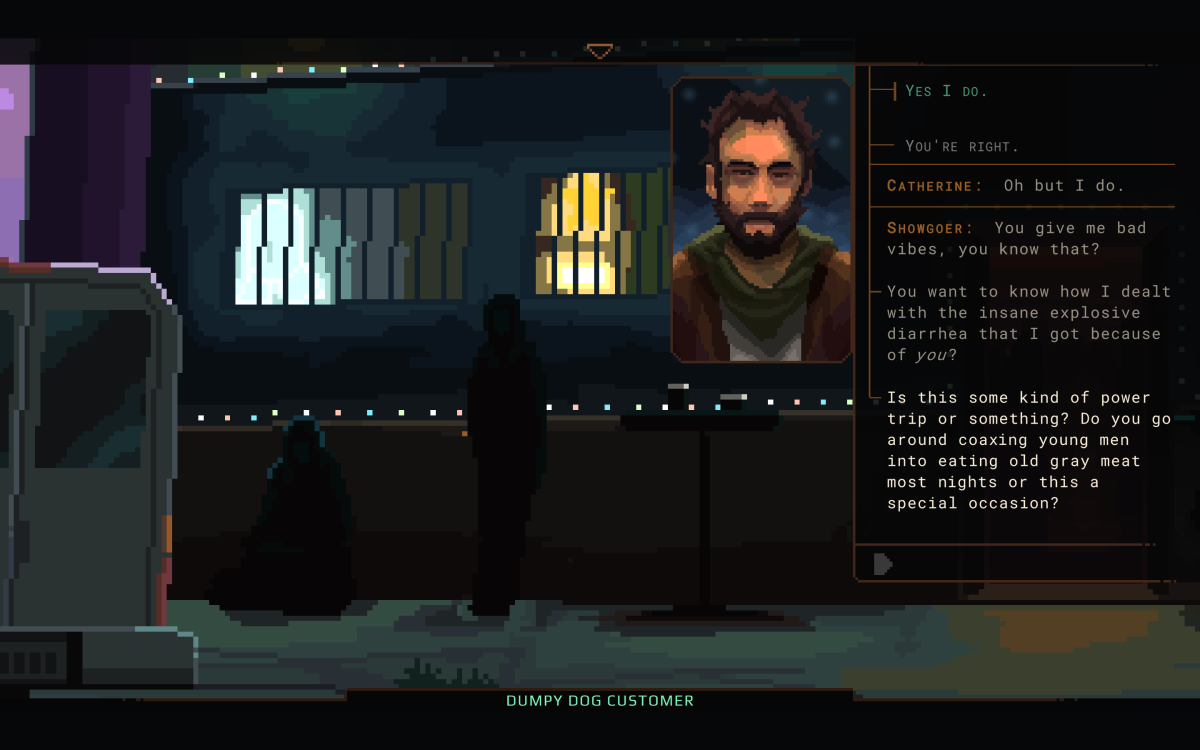 The hot dog story is such a short footnote in Catherine and Kay’s journey. There’s no big Hot Dog Conspiracy at the end, though there are plenty of other rabbit holes to fall down. Even after rolling credits, I kept thinking back to this scene in particular because of how it provides almost a satirical spin on what plenty of games have tried and occasionally struggled to do: showing players the consequences of their actions in an effective way. This lone scene went further than some games that build all the way to an unsatisfying Good or Evil ending moral crossroads. Through the lens of this extended poop joke, I actually reflected much more on my actions as a player than I did in any other games in 2022.