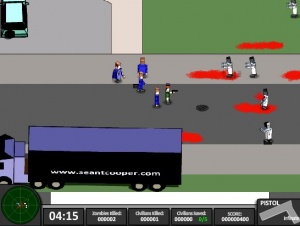 In preparation for my recent article on the psychology of zombie fiction, the perspective of Japanese game developers, the impact of the apocalypse on our minds and how all of this relates to games, I played a lot of zombie games. To be fair though, I didn’t really need an excuse.

I love zombies, and I love games. Zombie games are like fried cheese dipped in butter with bacon on top. Shooting zombies until they stop twitching couldn’t be more fun if it came with sex. Besides, it’s about the most harmless aggressive therapy diversion ever devised. After all, if Kurt Cobain was right, and it is OK to eat fish because they don’t have any feelings, killing zombies is better than OK, it’s right.

Not all zombie games are big-budget gore fests like Dead Rising and Resident Evil 4. Zombie games come in all shapes and sizes, and in the past few weeks I’ve played more than my fair share, including a few games guaranteed to knock Bejeweled out of the rotation of “games I play when the boss isn’t looking.”

The first incarnation of this game, Boxhead, is a fairly fun shooter. You play a vaguely LEGO-shaped protagonist with a handful of weapons who has to round up survivors and lead them to a safe zone. Between you and safety is a mob of rambling zombies. 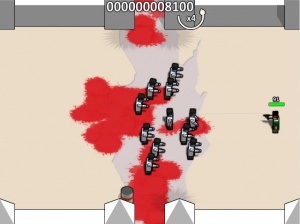 While Boxhead gets dull after only a few minutes, it sports some nifty mechanics and an entertaining blood spray effect. Shooting zombies causes them to drop blood on the game’s light-colored ground, and if you shoot enough zombies, the ground turns red. It’s puerile, but entertaining.

More Rooms (as well as its younger sibling The Rooms) expands on what made Boxhead great and takes away what bogged it down – a truly great sequel. In More Rooms the survivors are gone (good riddance); instead, it’s just you vs. the zombie horde in, as the title suggests, an assortment of creatively laid-out rooms. In addition to rooms, you also have more weapons – a lot more.

You can stack exploding barrels at the doorways and greet the invading zombies with a nasty surprise. You can lay claymore traps, shoot rockets, lob grenades and shoot a variety of semi and fully automatic firearms. Plus, each weapon is customizable; the more zombies you kill, the better your weapons get and so on and so on and so on. And if that wasn’t enough, you can also kill Satan.

Boxhead: More Rooms is a wildly addictive browser-based game that shredded my workweek like a zombie eating flesh. I suggest you not fire it up if you actually have work to do, but be sure to play it with the sound on. The moans and explosions are just as entertaining as the sprays of blood.

At the other end of the zombiepocalypse browser game spectrum is The Last Stand. The Last Stand is a nearly humorless simulation of defending a lonely outpost from an undead horde. With guns.

As far as zombie games go, The Last Stand is extremely easy, and not nearly as addictive as pick up and slaughter games like Boxhead, but what it does, it does well.

The zombies come at night – mostly, which practically means that The Last Stand is more like an RTS than a shooter, perhaps a first for the zombiepocalypse genre. During the day you work on your barricades, search for survivors and go looking for new guns. The more survivors you have with you, the more you can get done. At night you and your fellow survivors shoot zombies with the guns you’ve found and try to keep them from ruining your barricade. Again, the more survivors and the better the guns you have, the more successful you will be.

What makes The Last Stand unique is that it has a pre-set story arc. The resource management screen has a diary, in which your character tells his sad tale, and after 20 days the military sends a squad of commandos to whisk you away to someplace relatively more safe – if you last that long, which you probably will.

Did I mention the game is easy? It is. So easy that the terror of being surrounded by a teeming horde of walking dead is quickly replaced with the twisted thrill of taking potshots at the undead. So long as the barricade holds, they can’t get you, and so long as you keep shooting, they can’t do much to the barricade. If I were to imagine a best-case zombiepocalyopse scenario, this would be it. Unfortunately it’s not very thrilling, making The Last Stand less of a survival/horror game, and more of a sadism simulator.

Still, those zombies won’t shoot themselves, and since they’re already dead, what’s the harm? The Last Stand is easily worth the 20 or so minutes it will take to play it through to the end, and after you’re done you can always say you survived the zombiepocalypse. How many games let you do that?