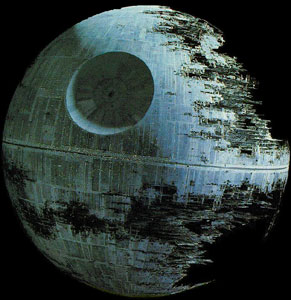 The U.S. Armed Forces could learn a few spending pointers from the Galactic Empire’s mistakes.

The Death Star just can’t catch a break. Star Wars fans have pointed out every flaw in the gargantuan engine of destruction, from its reliance on contractors to its prohibitive cost. Now, a report from the United States military has highlighted the Death Star as an example of reckless, unproven spending, and recommends that helpful droids would have been the wiser investment.

The report comes by way of Dan Ward, a Lieutenant Colonel in the U.S. Air Force, writing in the September-October 2011 issue of Defense AT&L. The piece is fairly light in tone, pointing out that those who support Darth Vader’s leadership “conveniently [overlook] his use of telekinetic strangulation as a primary motivational approach.” However, this is not just a military officer blowing off some steam. Defense AT&L is the primary publication of the Defense Acquisitions University, a military body that works with the Department of Defense in the fields of logistics, acquisitions, and, naturally, defense spending.

Although the piece is short and satirical in nature, there are some practical lessons in Ward’s words. He discusses the futility of spending tons of military money on unproven technology with shoddy field records, and the trouble inherent in making military hardware so specialized that only a Sith Lord could operate it. Perhaps most importantly, he underscores the importance and utility of the simple astromech droid, and why the Empire could have better maintained control with an army of them.

“Droids are Republic technology,” Ward writes. “They don’t intimidate anyone. Instead, they earn their keep by being useful and practical. Droids are about finesse, while Death Stars are about brute force. And given the current world situation, finesse is clearly what we need.”