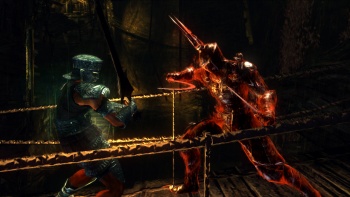 As it turns out, almost four times as many people were willing to torture themselves in Demon’s Souls for Atlus USA’s benefit than originally predicted.

The second half of last year was filled with surefire hits that everyone saw coming – Modern Warfare 2, Uncharted 2, Assassin’s Creed 2, to name a few – but one of the year’s surprise sleeper hits was Demon’s Souls, a brutally difficult game from From Software (which is an awkward sentence to write) that Atlus USA took a gamble on publishing here in the States.

It’s a gamble that seems to have paid off very, very well for the publisher. Us weak-minded, weak-hearted American gamers – who clearly weren’t thought of as being willing to put up with hardcore, brutally punishing and masochistic Japanese games?

Atlus planned to sell 75,000 copies of Demon’s Souls here in North America. As of February 28th (the end of its second quarter on sale), the game had sold 280,000 copies – almost four time Atlus’ initial projections.

Nicely done, guys. If a second Demon’s Souls comes out, maybe there won’t be as much risk bringing it over again.

Analyst: Activison Could Have Charged More for Stimulus Pack

Kojima Vows to Leave Industry if Next Project is a Failure