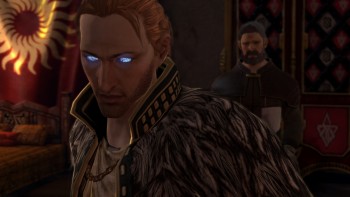 A gay gamer has launched a petition calling on BioWare to fire Dragon Age 2 lead writer David Gaider – yes, the one who so passionately defended gay romances in games – for disrespectfully stereotyping homosexuals.

This is about as bizarre as it gets. David Gaider, you may recall, fired off a lengthy, well-worded defense of gay romance options in videogames in response to a Dragon Age 2 player who complained about being hit on by male characters and the lack of a “No Homosexuality” option in the game. Gaider dismissed the complaint, saying that romances in the game are there for everyone, not just “the straight male gamer.”

That scored Gaider some serious points, especially among gay gamers, but it turns out that you really can’t please all of the people all of the time. So it is that a self-proclaimed “homosexual playing Dragon Age 2” has launched a petition calling for Gaider’s dismissal because of the way he portrayed gays in the game as “unable to be normal people and think [about] nothing but sex.”

“As a homosexual playing Dragon Age 2, I’ve witnessed the worst stereotype homosexual characters in this game. If you refused to make your moves on a gay character then you are received rivalry points for not wanting to be gay for the character,” the petition states. “This is completely wrong, homosexuals do not approach people and force them to kiss us, the person that wrote this game should be fired for stereotyping homosexuals in such a disrespectful way, as well as creating the worst writing in characters, plot and everything else in DA2.”

It’s impossible to say whether this is actually a gamer who feels legitimately aggrieved or just another Tuesday troll, but if it is legit, as GayGamer pointed out, it kind of misses the point. “Considering one male companion does this (Anders) and yet another does not (Fenris), this shows that the ‘gays’ in the game are capable of being normal people after all,” the site wrote. “They are capable of flirting and not flirting. You know, as people do.”

At last count, the petition to fire Gaider has 208 signatures, putting it neck-and-neck with another, newer petition filed in support of him. Not that he has much to worry about anyway; if anything, this is just more proof that people are people, regardless of their sexual proclivities – and that sometimes, people are stupid.