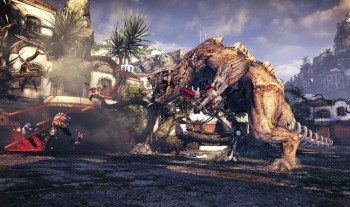 Bulletstorm has been given an 18+ rating in Germany, but it’s a heavily-censored 18+ that cuts out almost everything you’d want to play the game for in the first place.

You can file this one under “least surprising news of the day.” Germany, a notoriously inhospitable environment when it comes to violent videogames, has granted an 18+ rating to the upcoming shooter Bulletstorm, but only after it was heavily censored to meet the country’s content guidelines. Gone from the game are blood, splatter, dismemberment and ragdoll effects, which are pretty devastating cuts for a game that bills itself as an exercise in devising new and creatively violent ways to kill stuff.

There was no chance that Bulletstorm, one of the more controversial games in recent memory, was ever going to make it onto German shelves intact. Germany’s USK game rating body enforces strict guidelines with regards to game violence, often refusing to classify games or demanding heavy edits even to titles limited to adult gamers. It’s sometimes a difficult system to fathom, however; Bulletstorm has been neutered but Dead Space 2 made it under the wire with just a minor tweak to the multiplayer.

German gamers might still get a shot at the real deal through the Austrian version of the game, which is uncensored and carries a PEGI rating of 18+. But because it doesn’t carry a USK seal, it can be banned or “indexed” by the country’s youth protection board. According to GamesIndustry, retailers like Amazon have found that PEGI-rated games often sell much better than their USK-rated counterparts – big surprise there – but the sale of indexed games in Germany can actually result in criminal charges, so it’s a bit of a dicey proposition.

Due to youth protection laws, EA also refuses to allow German sites access to Bulletstorm trailers prior to 11 pm. Makes me wonder why it bothers at all; EA certainly wouldn’t be the first publisher to decide that the German market just isn’t worth the trouble.

Bulletstorm comes out on February 22 for the PC, Xbox 360 and PlayStation 3.