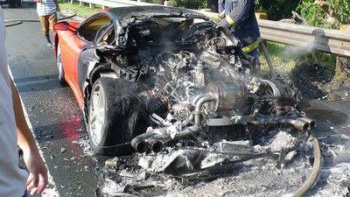 The information was pulled from a promotional interview between GT5 producer Yamauchi and Audi regarding the R8 sports car and its inclusion in the upcoming game. The site’s video is in German, but a rough translation regarding a question about recent updates to GT5 revealed this info:

“We are working on it, including weather changes,[…] And we’ll soon be able to simulate damage to racing cars.”

While discussing the dynamic weather effects in the game, Yamauchi also hinted upon GT5 including night time racing. The talk of model damage is the most interesting bit though, as the franchise has notoriously been promising the feature for years, and was planning to include it when GT 5: Prologue was released over a year ago. Rumblings of a collision damage patch for Prologue have been empty as well. It still remains unclear if the car model damage will in any way affect the car’s in-game handling. Amongst the major racing franchises, Gran Turismo is the only one that still does not feature any degree of car model damage.

GT:5 was announced along with the retail version of the PS3 way back in 2006 at E3. The game was initially announced as a PS3 launch title, but 3 years later still has yet to receive even an estimated release date. If memory serves, the only other racing game mentioned at Sony’s 2006 E3 presentation was Riiiiiiiiiiiiiiiidge Racer.