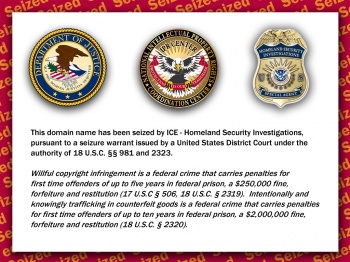 Internet pirates are facing a big heap of new trouble with the U.S. government cracking down more than ever before.

Over the past week, the U.S. Immigration and Customs Enforcement unit of the Department of Homeland Security seized more than 70 websites in a new crackdown on internet piracy. Visitors that once found links to illegal downloads or goods on these sites are now greeted by a seriously badass set of U.S. government emblems and a warning instead.

Some of the websites allowed users to search through and find torrents, files that are opened with a special program to connect to the download of a specific digital product. Torrents can be used for both good and evil, but are a common download method used for piracy of music, videogames, and movies. Other websites provided access to counterfeit physical goods like watches and sports merchandise.

Instead of finding a link to download the latest Harry Potter film or Jonas Brothers album on these sites, users now only find a message that states: “This domain name has been seized by ICE – Homeland Security Investigations.” Above the message are the emblems of the Department of Justice, U.S. Homeland Security Investigations, and the National Intellectual Property Rights Coordination Center. The NIPRCC actually has the most badass emblem of all, featuring a mean looking eagle soaring towards the viewer, grasping a banner in its talons that says: “Protection is our trademark, scumbag.” I added the “scumbag” part, only because it fits so well.

ICE released a written statement that said the website domains were taken because of “court-ordered seizure warrants.” ICE also said: “As this is an ongoing investigation, there are no additional details available at this time,” and that these domain owners better “check themselves, before they wreck themselves.” Okay, it didn’t say that last part either, but it really should have.

The seizures occur as the U.S. government is in the process of passing the somewhat controversial Combating Online Infringement and Counterfeits Act, which was approved by the Senate Judiciary Committee in mid-November. COICA, if passed, would allow the government to suspend a website’s domain if it was “dedicated to infringing activities,” and some are saying it’s in conflict with the Digital Millennium Copyright Act. The DMCA allows infringing websites to be absolved from responsibility if they remove infringing content when notified. COICA would also create a blacklist of foreign websites that U.S. ISPs would be required to block, negating the effect of piracy websites located outside of the U.S.

The Senate will vote on COICA in an upcoming session. It, and these recent seizures, seem to indicate that the internet piracy scene will face new challenges in the decade ahead.