Thursday’s test flight is the first in orbit for NASA, Lockheed Martin.

Update: Success! The Orion spacecraft launched at 7:05am ET today, and all mission objectives were completed without major incident.

The primary objective during this “shakedown mission” for Orion was to complete two orbits around the Earth, during which the capsule would reach a maximum height of 3,600 miles. NASA also successfully activated Orion’s Launch Abort System, and Spacecraft Adapter Jettison panels.

Splashdown in the Pacific Ocean occurred at 11:29am ET, and the Orion landed approximately 275 miles off the coast of Baja, Mexico. The mission is still technically active, as thermal data is being collected post-landing. Once that aspect of the mission is complete, and all systems are powered down, the recovery ships on standby will move in, and collect Orion from the sea.

There’s a live feed of the mission from NASA here. Currently, the feed is coming from a NASA UAV, which is monitoring the splashdown location from the skies above the Pacific near the Southwestern United States. The YouTube link to the right is of the successful launch earlier this morning.

The primary recovery vessel is the USS Anchorage, a a San Antonio-class amphibious transport dock built in New Orleans, Louisiana.

Original Story: Humankind is taking yet another step towards boots-on-the-ground Mars exploration, as NASA and Lockheed Martin prepare to conduct the first in-orbit test of the Orion spacecraft. 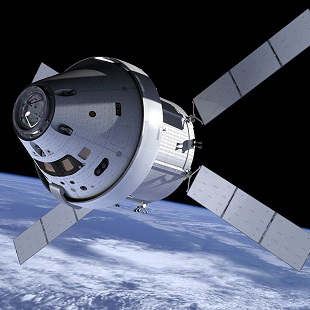 Thursday will mark the first time the Orion capsule heads into space, blasting off atop one of NASA’s Delta IV rocket systems. Once in place, Orion will orbit about 3,600 miles above our little blue marble, which is 15 times higher up than the International Space Station. Orion will then orbit the Earth twice, replete with 1,200 sensors to determine any number of things — durability above all else.

This test, officially called “Exploration Flight Test-1,” will also be unmanned — not a surprise, given it’s Orion’s first trip into space — and the trip will last a total of about four and a half hours. This Orion test, while human-free, will be the furthest a (designed for humans) space capsule has flown since the Apollo missions of old.

The launch is planned for 7:05am ET, and will take place at Cape Canaveral, Florida. If weather is a factor, the launch window is a little over two hours.

The longer timeline for the Orion spacecraft includes several missions, including a potential two-man lunar asteroid exploration mission around 2021, and an eventual Mars mission that could happen as soon as the early 2030s. For these missions, NASA would ditch the smaller, older Delta IV rocket for the under-construction SLS platform.