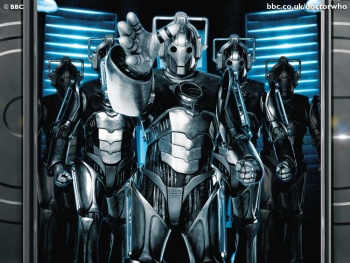 The TARDIS might be playing host to a very different Captain Jack if rumors of a Doctor Who movie are true.

Rumors are circulating that Johnny Depp has been cast as the Doctor in a big screen adaptation of the long running British series, Doctor Who. Russell T. Davies, the former lead writer for the show, is supposedly penning the movie version.

“Bringing the Who franchise to the theaters is a regeneration for the character beyond the usual one. A theatrical release has a greater range and can reach millions of more people than just the fans,” said Davies.

“There will be brand new concepts and the film will be just as adventurous, scary and humorous as the television programme. But none of us working the film will forget what makes the character great and interesting and the long-time fans will not be disappointed because yes, the Daleks make an appearance.”

A brief plot synopsis suggests that the Doctor, along with a small team of “volunteers,” will travel through time and space healing the sick of diseases brought by invading aliens. During the course of the movie, the Doctor cures the bubonic plague, and then heads to Africa to work on Ebola.

So, how likely is all this? Well, on the one hand, the rumor seems to have started on a site called PubArticles, which is a kind of YouTube for articles, and the quote from Davies and plot details are taken from the piece that appeared on the site. Given the complete lack of any oversight, it’s entirely possible – and probably very likely – that this is a complete fabrication. On the other hand, according to sci-fi site TOR, “movie studio sources” confirmed both the existence of the movie, and Depp’s involvement.

Assuming for a moment that it is true – and I’ll be honest, I’m less than convinced – I can think of worse choices than Johnny Depp to play the Doctor. He’s a great actor and is a big enough name to get people who might ordinarily not engage with the regular TV show to pay attention. Of course, the movie would be something separate and distinct from the show, so how much crossover there might be is debatable.