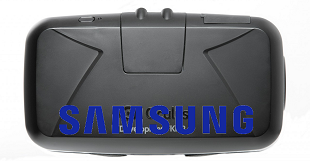 According to sources from Engadget, Samsung’s headset will have users plug their phone directly into the headset, allowing their phone’s camera to provide a video feed to the outside world.

Last week, a rumor emerged that phone developer Samsung was working on its own virtual reality headset. Just earlier today, Engadget reported that the device is indeed being developed, and that Samsung is working alongside none other than Oculus on the final product.

Engadget reported that they spoke with sources close to both companies who are currently using the headset on Samsung Galaxy S4 phones. The sources said the headset, while still a work in progress, is “a shockingly good experience.”

Samsung’s headset will apparently have users plug their phone directly into the device to use as a screen. The phone will plug in through a port such as a micro-USB. The headset is said to have, at the very least, an accelerometer, so any motion-tracking will be off-loaded from the phone.

While strapping a phone directly to your face may sound a bit silly, Engadget’s sources state that that there is at least one practical purpose as the phone’s rear-facing camera will allow the headset to provide a video feed to the outside world.

The deal between the two companies is apparently built around a technology swap. Oculus is creating the software for the device, while Samsung is handling the hardware. Under an agreement between the two companies, Oculus will get early access to Samsung’s next-gen OLED screens, which the company needs for the final version of its VR headset, while Samsung gets early access to Oculus’ mobile software developer kit and helps develop user interface software.

The advantage to Samsung, according to Engadget, is that it gets to be first to the market with a VR headset without having to invest the same time and money that competitors like Oculus and Sony are.

While the machine is capable of playing games, Samsung apparently is looking to market their headset as a more general market media device, which sets it apart from the gaming-centered Oculus.

What are your thoughts on Samsung’s alleged headset plans? Sound off in the comments below.