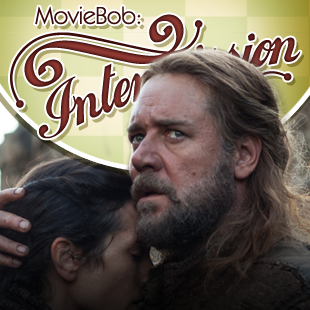 Darren Aronofsky’s Noah, which is reviewed today on Escape to The Movies, breaks with recent Hollywood tradition in approaching Biblical adaptation with equal parts apocryphal strangeness and bold modernist revisionism. But while Noah may look revolutionary next to bland recent offerings like Son of God, its offbeat treatment of Holy Writ places it squarely in a storied tradition of cinematic offerings that looked for spectacle in Scripture.

Join me as I show you the 10 films that retold Biblical stories in the strangest way possible. 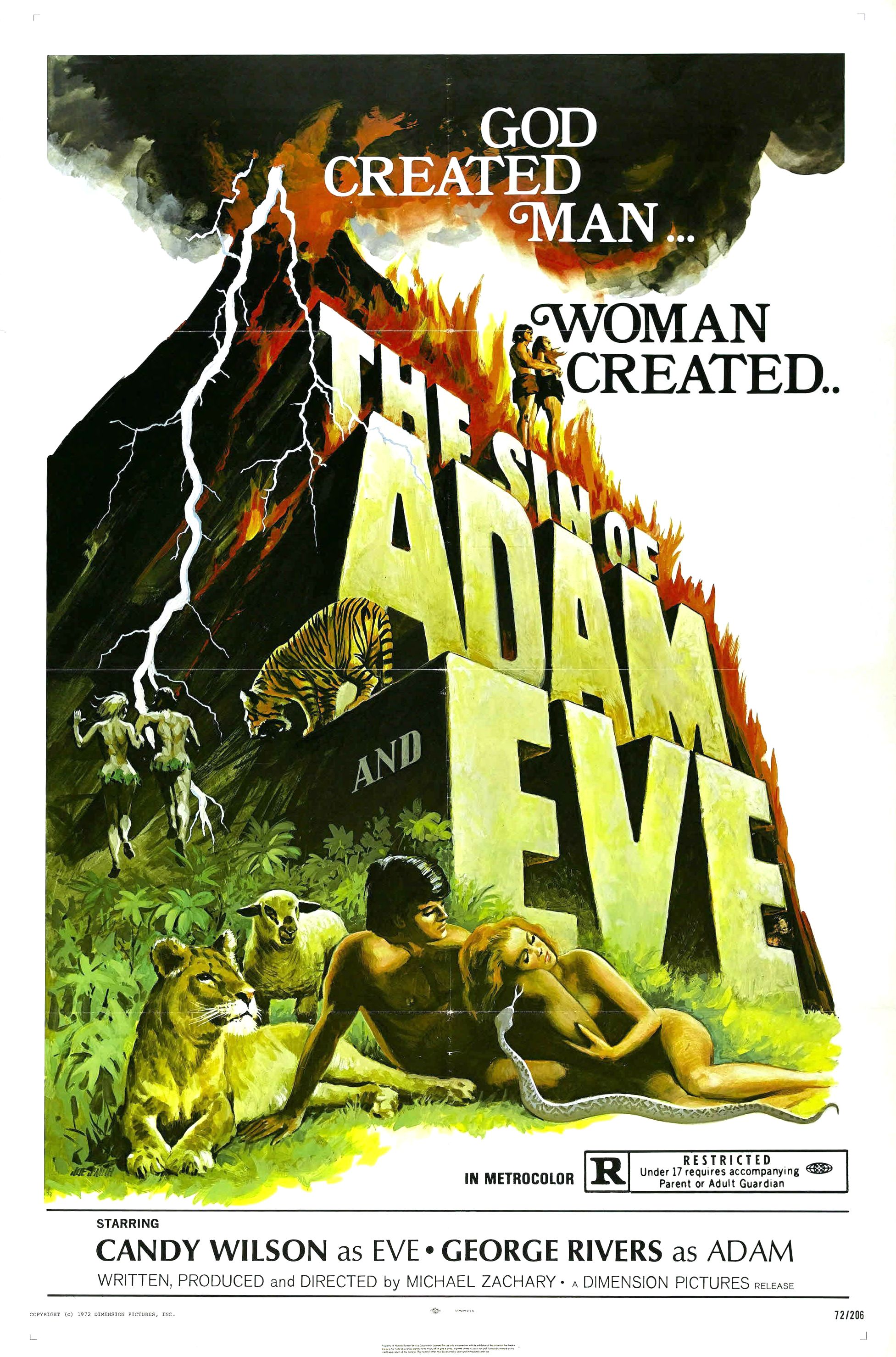 So here’s a (literal) dirty little secret about the preponderance of Biblical-themed movies in the Good Old Days of moviemaking: A lot of the time, they were produced as an excuse for filmmakers to indulge in depicting sex and violence beyond what would otherwise have been allowable.

Case in point, this famous Mexican-produced 1969 “epic” that retells the Garden of Eden story more-or-less straightforward. Which means it’s really all just an excuse for its shapely stars (Jorge Rivero and Candice “Candy Cave” Wilson) to preen about stark naked; with giant prop flowers, long hair and carefully-composed shots hiding anything that might push this over into outright softcore. 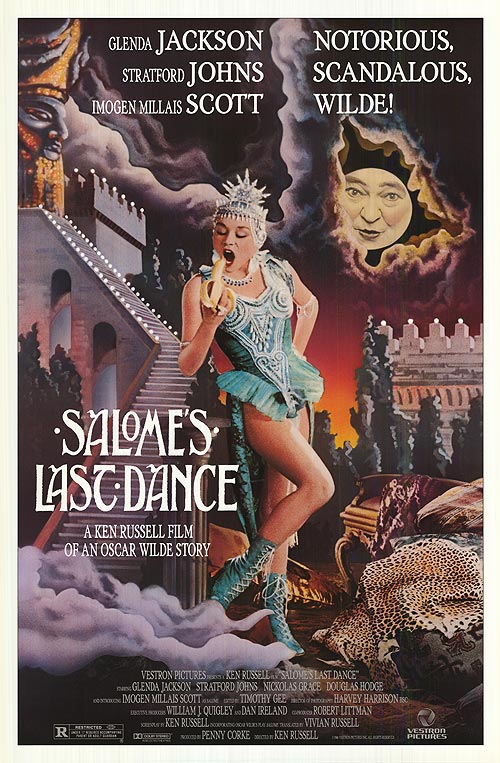 Salome is a minor figure in The New Testament, a princess who seduces a king by dancing and demands that John The Baptist be decapitated. The story got stretched out by Renaissance writers and artists looking for salacious subject matter (the Christian part of The Bible just isn’t as “sexy” as the Jewish part,) and was adapted into a famously banned play by Oscar Wilde. Last Dance is a movie adaptation of Wilde’s play by eclectic auteur Ken Russell, employing his usual blend of psychedelic imagery and theatrical weirdness. 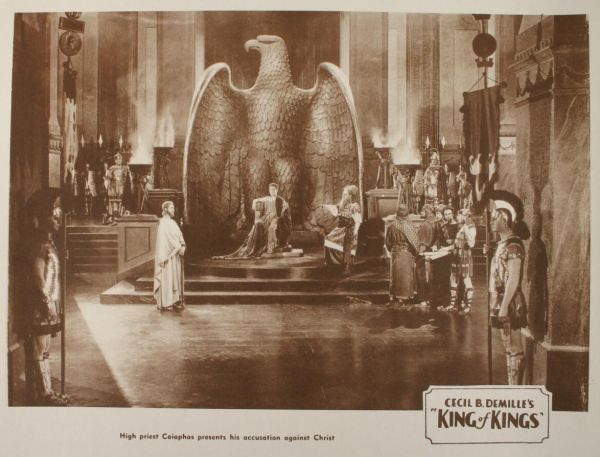 Cecil B. DeMille was early Hollywood’s undisputed king of mixing the sacred and the profane for onscreen spectacle (he’ll turn up at least once more on this list.) He brought his A-game for this early silent Life of Christ tale that features extrabiblical extrapolations like Mary Magdalene cruising about on a zebra-drawn chariot, “sins” anthropomorphized as humanoid ghost-figures and Jesus’ powers visualized through light-show FX. And for the big Resurrection finale, DeMille even busted out 1927’s biggest movie magic-trick of all: COLOR!

In 1965, almost forty years before The DaVinci Code, Biblical scholar Hugh J. Schonfield set off a firestorm of controversy with his book The Passover Plot which posits an alternate theory of The Crucifixion. Namely, that Yeshua (Jesus) and his Apostles were actually a clever band of revolutionaries engaged in an elaborate scheme to stage his death, resurrection and other miracles in order to position him as the prophesied Messiah and incite Jewish rebellion against the Roman Occupation. In 1976, it was made into a movie and, in a retroactively-amusing twist, Zalman King – later infamous as producer of softcore-erotica franchises like Red Shoe Diaries and 9½ Weeks – played Jesus. 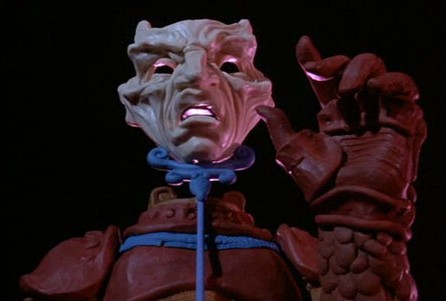 The Adventures of Mark Twain

This 1985 production from the great Will Vinton Studios was billed as “The First Full-Length Theatrical Film in The Magic Claymation!” but it might also be the strangest damn thing ever smuggled into movie theaters in the guise of children’s entertainment. Ever. It’s a bizarre fantasy wherein characters created by the beloved American humorist and author tag along with their creator on an airship to chase down Haley’s Comet.

Notably, the film has an intriguing focus of Twain’s often-overlooked works of religious satire, including adaptations of The Diary of Adam & Eve and Captain Stormfield’s Visit to Heaven. But the insane showstopper is the notoriously creepy Mysterious Stranger sequence; in which Tom Sawyer, Huck Finn and Becky Thatcher encounter an angel… named Satan. 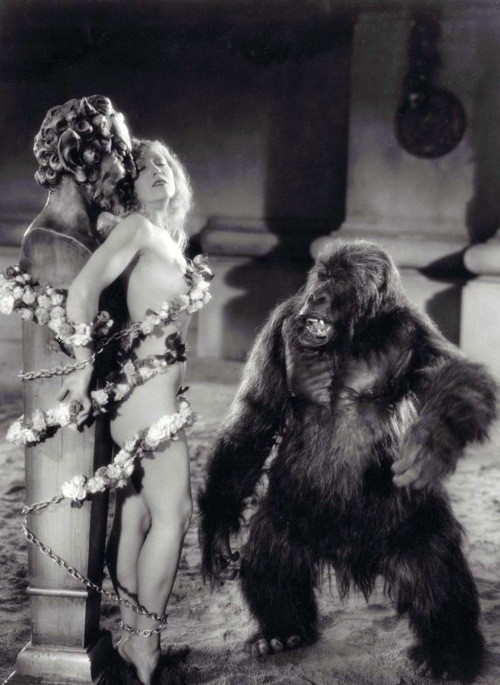 Cecil B. DeMille once again, here conjuring one of his all-time biggest blockbusters out of a heavily-fictionalized account of Christian persecution in Nero’s Rome. Much like The Sin of Adam & Eve, the supposedly-righteous plot (a Roman Centurion gradually sees the light and abandons decadence for Godly purity when he falls in love with a doomed Christian girl) exists strictly as an excuse to splash as much gore and debauchery as was allowable in 1932. A milk-bath (barely) conceals a nude Claudet Colbert and our Centurion hero tries (unsuccessfully) to woo his chaste would-be girlfriend into seeing things The Roman Way with a lesbian lapdance. The whole thing builds to an extended Colosseum sequence featuring spiked-glove boxing, execution-by-elephant, nude women being fed to crocodiles, nude women being “offered” to enraged gorillas, bear-wrestling and a fight to the death between Pygmy dwarves and Amazons. I don’t know about you, but I don’t remember that in the King James Bible. 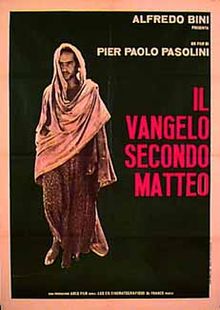 The Gospel According to St. Matthew

Pier Paolo Pasolini, probably best known to modern cinephiles for Salo: 120 Days of Sodom, was a gay man, a Marxist and an avowed atheist. But one day in 1962, while visiting the town of Assisi for a seminar involving Pope John XXIII’s call to dialogue with non-Christian artists, he found himself stuck in his hotel room (the Pope’s visit had created a traffic jam, impeding all travel) with nothing to occupy his time save for a Bible he found in a drawer. So goes the story, Pasolini read it cover to cover and emerged with his atheism intact… but overtaken with desire to make a movie about Jesus.

Gospel is regarded as one of best but also most unusual of its genre, leaning on the literal and utilizing an Italian Neo-Realist visual style instead of the usual Hollywood “Bible epic” look. The narrative is faithful enough to earn the film a place on a Vatican recommended films list, but it also gained attention from political critics for emphasizing Christ’s charity/community-centered preaching over miracles and the supernatural which led some to accuse Pasolini of hijacking the Christ story as a vehicle for his leftist political agenda. 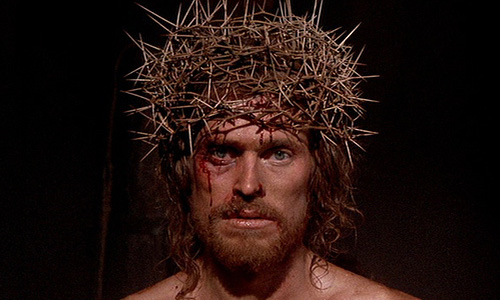 The Last Temptation of Christ

Hardly the most unusual movie on this particular list, granted, but there’s never been a more controversial major Biblical film than this one, which drew an unprecedented explosion of protest and media condemnation in the lead up to its release in 1988.

Directed by Martin Scorsese and based on the equally-incendiary 1953 Nikos Kazantzakis novel of the same name, Last Temptation features a reimagined Jesus who tries his hand at activism and insurrection before realizing his destiny of crucifixion only to be dissuaded from going through with death by an Angel. He abandons the cross to live life as a mortal and raise a family, but struggles with whether he made the right decision. There’s a twist to all this (read the title again) but it hasn’t stopped the film from remaining controversial decades later. 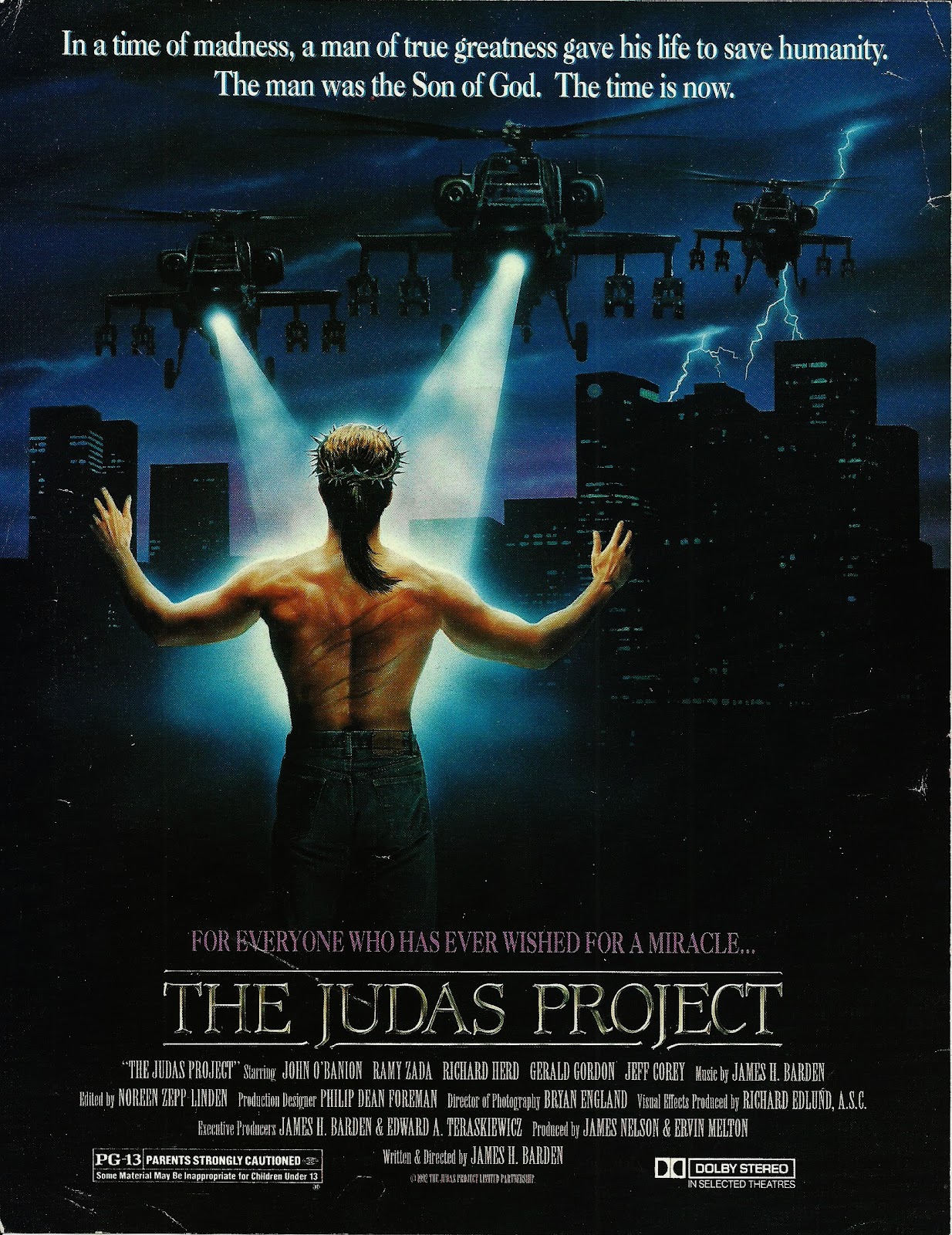 The Judas Project is not that bad of an idea for a movie: What if the life of Jesus Christ as described The Gospels took place in the present-day? The execution, however, is this notoriously inept low-budget offering that looks – from the community-theater level casting to the chintzy rural location shooting like nothing so much as a Tim & Eric sketch. Unfortunately, these filmmakers weren’t joking around. 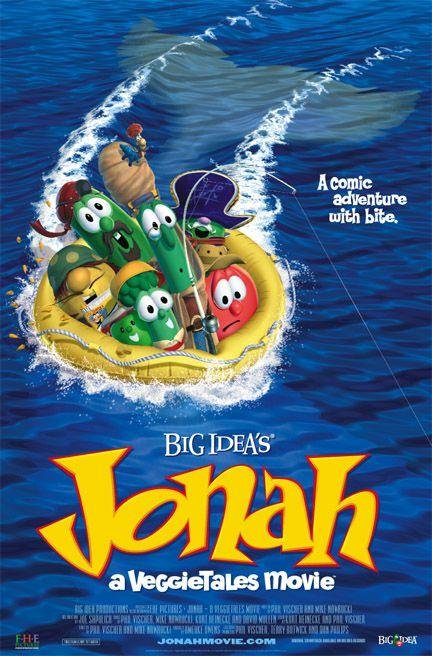 Hey, here’s an Internet Oldie-But-Goodie: Beatles 3000, a sharp parody of just how much conjecture and guesswork is often involved in reconstructing cultures of the past. Funny stuff, but also kind of sobering when you think about it. For example: Should our world ever be rendered near-forgotten, which might archaeologists of the future conclude based on the notion that at one point in time one of the most popular retellings of Christian religious tradition was VeggieTales, an animated series where Bible stories were acted out by humanized talking vegetables? Will far-future theologians believe that Bob The Tomato and Elijah were prophets of equal importance?

Well, whatever. In 2002 the singularly bizarre phenomenon of VeggieTales was just big enough to generate a feature film, which took the form of a (loose) retelling of the story of Jonah, the Old Testament prophet who tried to duck out on an assignment and got swallowed by a whale for his trouble. This version added some comedic pirates to the story, who then went on to star in a (non-Bible-based) spin-off of their own.