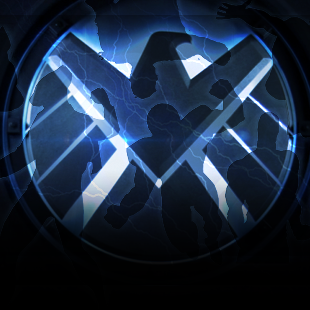 What a ride it’s been for the inaugural season of Agents of S.H.I.E.L.D. which, as you’ll no doubt have already gathered, is taking another time-out this week. What many fans were hoping would be a kind of televised (and Marvel-ized) equivalent to DC’s side-character spotlighting maxiseries 52 debuted looking more like NCIS: Marvel Universe – not necessarily a bad idea… just not what most were hoping for.

But then, just as fans were sort-of getting acclimated to that (or just realizing that the Marvel Cinematic Universe would continue to exist even if they didn’t bother to watch this one part of it), Agents changed course (sort of) and started inching toward becoming the series folks had hoped for. Dipping into the Marvel Cosmology, welcoming guest stars from the movies and even introducing characters from the Marvel canon we haven’t met yet.

That last one has a lot of potential, one that the series seems eager to exploit as it heads toward its season finale. Adrian Pasdar is scheduled to appear in an upcoming episode as perennial Hulk foe Glenn Talbot, and Nerd Comedy icon Patton Oswald has been tapped to appear as Eric Koenig. Fun!

But, unfortunately, the C and D-lists of the Marvel Universe aren’t free of folks who’re best left forgotten, even if you’re just trying to fill a guest-spot on a TV series. Here are ten guys who could conceivably (taking into account the show’s budget and general aesthetic preferences) turn up on “Agents of S.H.I.E.L.D” … but probably shouldn’t. 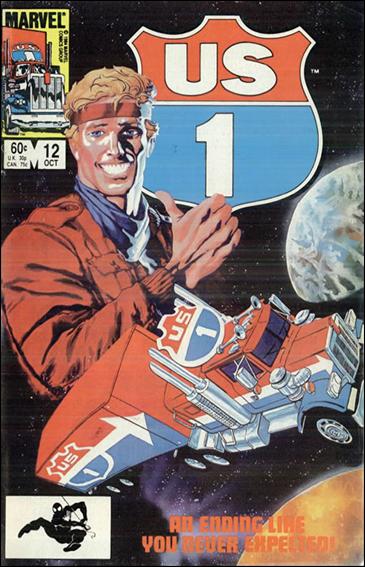 U.S. 1
Back when every Z-list superhero wasn’t immediately considered a potential blockbuster franchise, publishers like Marvel sought big money by developing comic lines promoting branded products. It wasn’t all bad – this was how Transformers and G.I. Joe got their storylines, for the most part – but other times… other times you got U.S. 1, a character “inspired” by a slot car racing toy.

Full name: Ulysses Solomon Archer (no, really: U.S.A.); an interstate trucker whose freak injury gifts him with a bionic skull implant that turns him into a human CB Radio. Alongside his support team of mechanics, fellow rig-jockeys and roadside diner proprietors; he and his customized super-truck (basic idea: What if The Batmobile WAS The Bat-Cave?) cruised the open road, righting wrongs and battling demonic supervillain The Highwayman. The series – shocker! – wasn’t popular in its day (neither was the toy, it turned out), but has experienced a cult-revival after having been featured on Atop The Fourth Wall. 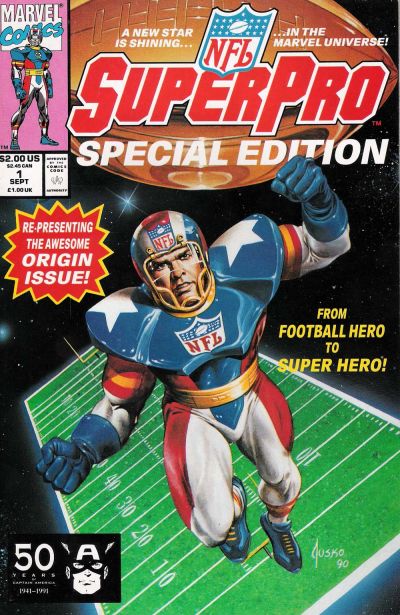 NFL Superpro
Speaking of ill-considered licenses, here’s a guy who was willed into existence as part of a brief partnership between Marvel and the National Football League. When would’ve-been star athlete (he got injured saving a child) turned sports reporter Phil Grayfield is inadvertently on hand as thieves rob a super-scientist/NFL fan’s house, he borrows an experimental suit of next-generation football gear and uses it like power armor to battle this and other football-related criminality.

Future comics all-star Fabian Niezca claims that he took the job of creating “SuperPro” exclusively to score free NFL tickets. Sad thing is, it’s not hard at all to imagine a version of this clown popping up should The Agents ever wind up investigating nefarious-yet-charmingly-low-tech doings surrounding a football stadium. (Fitz: “Just when I think you Americans can’t do anything worse to football!”) 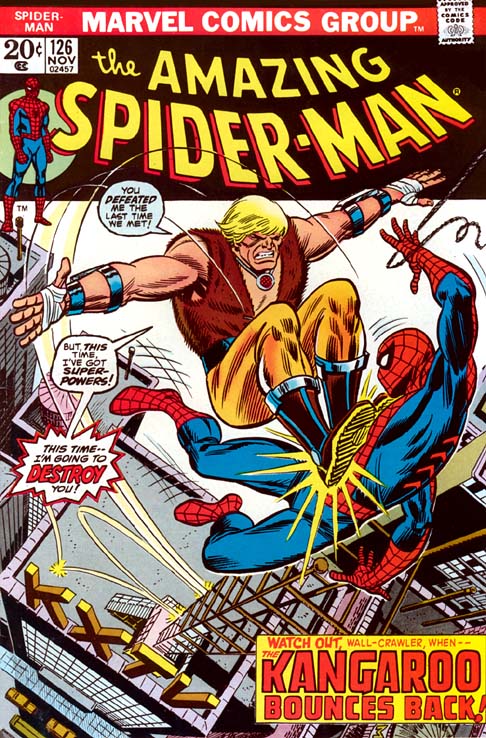 The Kangaroo
Frank Oliver doesn’t quite seem to grasp the point behind the “animal-nickname supervillain” concept, in that he doesn’t actually dress up like a kangaroo (he doesn’t even have a pouch!) His supposedly roo-aligned abilities of jumping pretty high and, um… being from Australia could likely have been attributable to a more threatening-sounding creature name… like, say, anything. 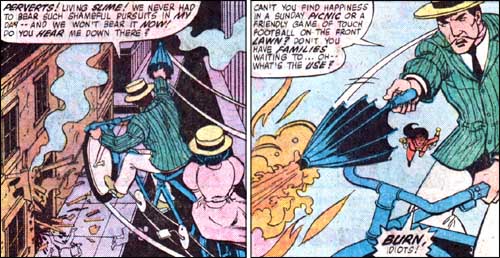 Turner D. Century
There’s nostalgia, there’s obsessive nostalgia, there’s creepy nostalgia… and then there’s Clifford Michaels. He’s a guy who’s thoroughly convinced that American culture from dress to music to general-attitude has been heading downhill ever since 1899-1900 or so, thus “The Turn of The Century,” get it?

As Turner D. Century, Michaels commits criminal acts against modernity while dressing and speaking like a classical gentleman of the 1900s using an array of retro-styled gadgetry (a flying tandem bicycle, flame-thrower cane umbrella, etc.) Because nothing says scary bad guy like a straw boater’s hat. 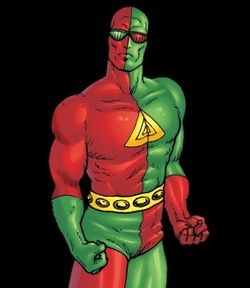 Very few of these “Worst Comics Characters” lists are comprised of figures from the last decade or so, and there’s a reason for that. Back when comics were mainly sold issue to issue from magazine racks, single-issue adventures were the focus and you had to come up with a steady stream of new faces (mostly bad guys) to keep drawing attention, lest potential customers decide “Nah, I’ve already got plenty of these with Electro!” and moving on. So you can almost imagine how 3D Man came to be: “Um… 3D! That’s a thing again, right? With the glasses? Okay! So maybe he’s, like a guy… times 3?”

And that’s pretty-much it: Charles Chandler is a test pilot who’s been zapped into a 2-dimensional being after an encounter with The Skrulls, but he can be willed into fully-dimensional existence when his brother Hal dons a pair of special glasses and concentrates really hard. As 3D Man, Chandler is exactly three times faster, three times stronger, three times smarter and so on than the average human specimen. Problematically, that still leaves him many more times weaker than even most second-tier Marvel crimefighters; to say nothing of a hundred times less interesting than even the other losers on this list. 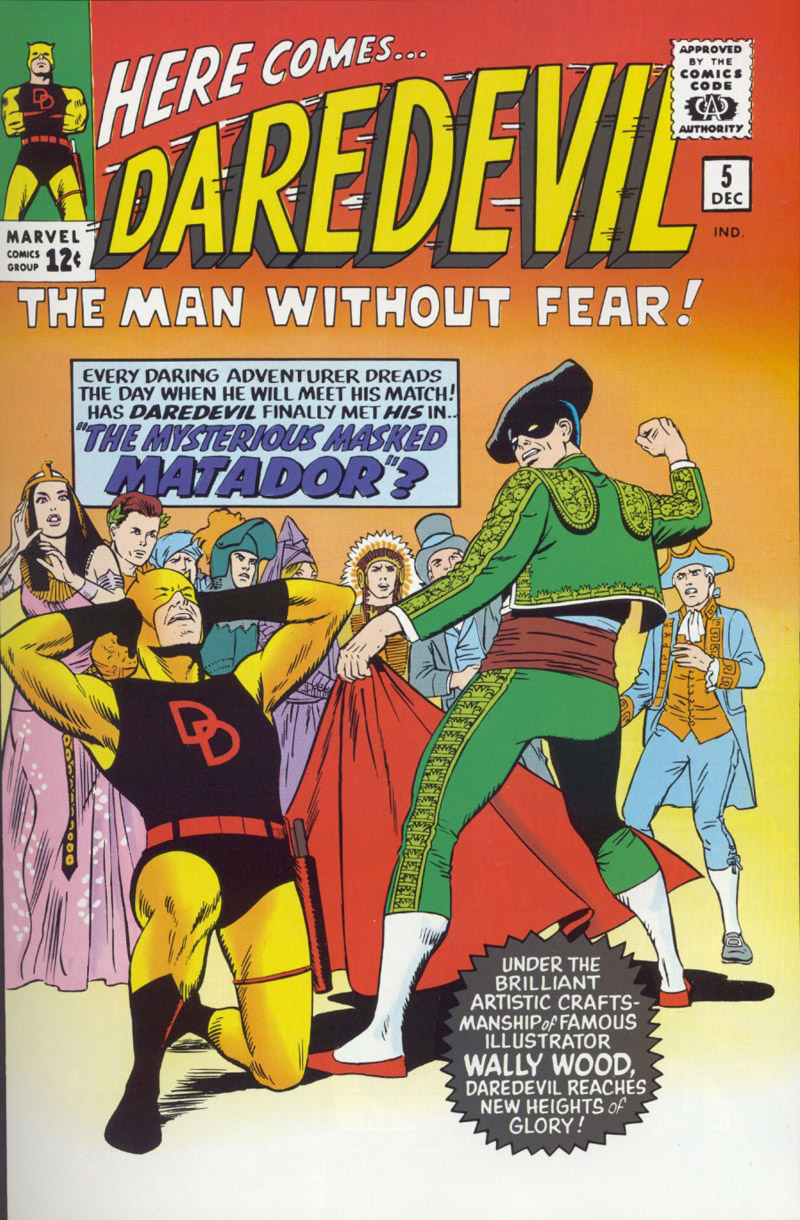 The Masked Matador
Y’know who has a lot of embarrassing villains in their past? Daredevil. But few are as eye-rolling as Manuel Eloganto, once upon a time the most famous professional bullfighter in Spain but whose excessive cruelty to his animal “opponents” (compared to what, exactly? It’s a bullfight) turned crowds violently against him. Resigning in disgrace, he re-invented himself as… well, as himself but now with a mask, and swore revenge on mankind – revenge here meaning “commit crimes using surprisingly versatile bull-fighting skills. How lame is The Masked Matador? At one point, an underworld assassin was assigned to put him down once and for all but decided not to bother after learning he’d been reduced to babysitting his sister’s kid. 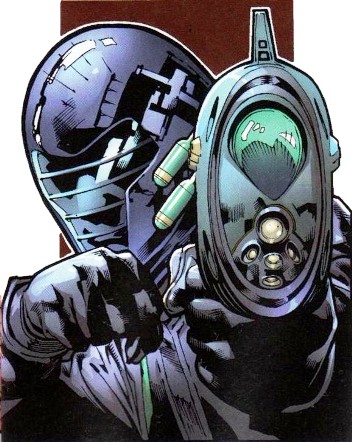 Overdrive
The near-constant need for new characters (even bad ones) in the Silver Age didn’t always mean sticking “Man” in front of whatever word popped into the writer’s head during crunch- ime. Sometimes, it also meant frantically grasping to create villain versions of whatever a currently popular trend was (see: Blue Streak and Rocket Racer).

Overdrive, (real name), is a rare modern example of this sad tradition, a Spider-Man foe concieved during the period of Brand New Day when writers were purposefully abstaining from dipping into the classic rogues gallery.

He’s the “Pimp My Ride” supervillain, clad in an armored suit that allows him to inject mentally-controlled nanites into machinery and rebuild it. Basically, he can instantly “trick out” any vehicle he gets behind the wheel of into something more badass/powerful. Agent Coulson vs Evil Dominic Toretto (“Uh-oh – he touched Lola.”)? Yeah, let’s not. 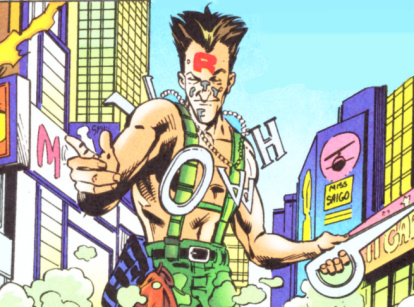 Typeface
Gordon Thomas is a military veteran turned sign artist who goes mad and turns costumed vigilante/anarchist after losing his job. His gimmick? Letters. He paints letters on his face and throws giant letters as weapons, either sharpened at the edges into throwing-blades or rigged to explode as letter bombs.

Unsurprisingly, TypeFace is a fairly recent creation, reflecting just how many less-awful gimmicks had been taken by the time he got into the game. His most memorable role was likely figuring (briefly) in the origin of the similarly-infamous “new” character, Penance, in the aftermath of Marvel’s Civil War event. 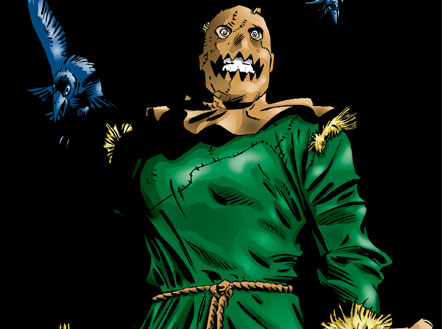 The Scarecrow
Nope, this isn’t a mistake. See, apparently you can’t really copyright a generic reference like a scarecrow, so DC Comics and Marvel both have characters running around by those names – the main difference being that DC’s Scarecrow is a fan-favorite Batman-nemesis while Marvel has two Scarecrows that nobody has ever cared about.

The main Marvel Scarecrow is Ebenezer Laughton, a mentally-unstable former circus escape artist who dresses up like a scarecrow and commits robberies and murders via a flock of crows trained to obey his commands, which is a weirdly confused use of a gimmick when you think about it. At one point he was part of a whole team of forgettable also-rans like The Eel, Porcupine and The Unicorn. The other Marvel Scarecrow is a supernatural entity similar to Ghost Rider whose name eventually got changed to “Straw Man.” Neither of them are very compelling, but I can (sadly) imagine Coulson and Company encountering Laughton for a brief takeoff on Hitchcock’s The Birds.

Eye Scream
Remember that ancient Simpsons episode where Bart briefly became a hall monitor, accessed the school’s confiscated property room and discovered “Complete collections of MAD, Cracked and even the occasional issue of Crazy?” Bet you assume “Crazy” was just a joke at the expense of humor-magazine naming conventions, and maybe it was – but it was also the name of Marvel’s very own MAD-knockoff of the ’70s and ’80s.

Said publication had its own answer to Alfred E. Neuman, “Obnoxio The Clown,” who got his own one-off crossover into mainstream Marvel in 1983, where he met The X-Men and this infamous mutant criminal with powers almost as useless as Jubilee’s: Eye Scream can transform his body into ice cream… of any flavor he chooses! Because what’s more threatening than a villain whose fatal weaknesses include small children, ants, Ben and/or Jerry and the Sun?

Of course, if you missed our 10 Characters Who Should Show Up on Agents of S.H.I.E.L.D., then you really should go back and read it, you know, for context.