2015 had a strong start for indie and AAA alike, and the momentum carried us through the rest of the year. With dozens of indie titles coming out basically every week, it’s hard to keep up, and even the most hardcore of indie gamers can’t be blamed for letting some slip through the cracks. I’ve scoured my Steam library for some of the most impressive titles I’ve played over the course of the last 12 months, and scanning the list reminds me of just how fortunate the industry is to have the dedicated independent developers churning out high quality titles that typically cost significantly less than their AAA counterparts.

Despite playing as many games as I possibly could throughout the year, I know I’ve missed some, so if you’ve got a personal favorite that’s not on the list below, I’d love to hear what it is in the comments!

Given how much I struggled to come up with my Five Favorites for this year, I’ve opted to just list these alphabetically to avoid any more tough decisions. It’s the holidays after all, and we all deserve a little rest. Before you say it, I was also surprised to see that the list doesn’t go past the letter ‘G’. As someone with a ‘V’ last name, however, I understand the plight of always being listed last. I wonder when we’ll start seeing a trend of starting indie titles with an underscore for maximum alphabetical exposure? 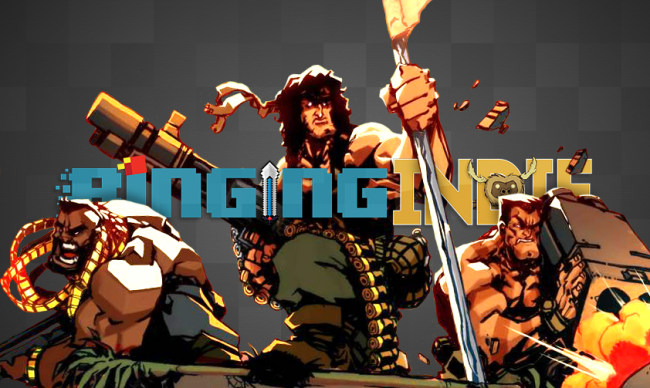 Twin Stick Shooters tend to require a particular sort of masochism or extraordinary reflexes to be fun for long, but Assault Android Cactus from Witch Beam Studios offers a slightly more accessible experience, widening the potential audience. Don’t get me wrong, though. It’s still going to be a head-meets-wall sort of frustrating experience for many, many gamers out there, but if you’re an avid gamer, even if not a veteran of Twin-Stick Shooters, at least you’ll stand a chance.

AAC also has a charming aesthetic going for it, which is likely to appeal to the whole family without sacrificing the appeal to independent gamers. Each of the playable androids – You start off playing as “Cactus,” hence the name – has a chibi sort of cuteness to it, though I’ll admit I have a particular fondness for “Starch.” She’s the most obviously an android of the bunch, and her continuous-fire laser is delightfully powerful. Each android has a similarly distinct weapon, offering a playstyle for virtually everybody.

Developer Free Lives has graced the world with the single most patriotic and truly American side-scrolling shooter the world has ever seen in Broforce. I assume that every gamer, old and young, is at least familiar with the classic Konami title, Contra. Broforce is this generation’s Contra and, for once, the “this generation” descriptor isn’t accompanied by an old man shaking his fist and yelling about “whippersnappers.”

it’s just as grueling an experience as the classic, but comes with the modernized checkpoint system, and zone progression. It’s also one of the most pun-tastic games you’ll ever play, with every single playable character – each character has a unique weapon and special attack, rather than just being a cosmetic difference – being a pop culture reference adopting the titular “Bro.” I still hum the A-Team theme song, so seeing a pixelated BA Broracus (Mr. T’s character) was glorious. You’ll find Brobocop (Robocop), Rambro (Rambo), Mr. Anderbro (The Matrix), Ash Brolliams (Evil Dead), and an incredible number of other punny little dudes.

Unless you hate freedom, you should definitely play Broforce. Bro.

I’d never heard of Artifice Studio before I got my hands on a preview code for Conflicks, but this was a fantastic introduction to what must be an incredibly quirky group of game devs. I adore a good gimmick, and the team behind Conflicks managed to make an absolutely ridiculous gimmick into an interesting and entertaining story as unique as the gameplay it uses to advance the plot. The story uses an alternate history in which chicken eggs can be refined into a universal energy source, discovered centuries before our adoption of technology more robust than steam-powered engines.

Of course, the enslaved chickens won’t take it lying down, so you’ve got multiple human factions, based on historical cultures, like a Napoleonic conqueror, as well as the chicken faction, which is trying to free their brethren from captivity. The gameplay is as unexpected as the narrative, since your space-based RTS uses an Angry Birds-style movement system. Instead of clicking a destination, you have to click, drag, and release your ships to move them, akin to launching a bird from its slingshot. Navigation is tough, but ramming an enemy capital ship into a planet’s gravity well, and watching it explode on impact is distinctly satisfying. Your ships only have a couple of abilities, and you’re rarely have that many floating around, so micromanaging your fleet rarely becomes too overbearing a task. If you don’t mind a little absurdity in your story and aren’t married to the traditional RTS gameplay mechanics, you’ll do well to check this one out.

Okay, you caught me. Yes, only moments ago (depending on how quickly you read), I explicitly said I didn’t include a game so I could mention more of them, but I just loved Hand of Fate too much not to list it here. I’ve talked a lot about it, so I’ll keep this brief. In Hand of Fate, you’ll be squaring off against one of the smarmiest antagonists in gaming history since that stupid laughing dog in Duck Hunt. If you’ve ever played with the classic orange zapper, you’ve almost certainly tried your damndest to shoot the world’s worst dog, and that kind of motivation is prevalent throughout Hand of Fate.

The randomized maps and luck/skill combo of the “fate” mechanic – you’ll be presented four cards, which are shuffled in front of you, so it’s usually possible to keep track of at least one – give it a ton of replay value, but you’ll find yourself coming back over and over again primarily so you can show the Dealer who’s boss. The blend of deck building, looting, hack-and-slash combat, and randomness in the Tarot deck is brilliant, and I can hardly recommend it enough.

Dungeoneering, from indie Irish dev studio Gambrinous, slaps a cutesy aesthetic onto a unique twist on dungeon crawling. You’ll send an adventurer down to the dungeon, but once there, they’re out of your hands. Instead of telling your character where to go and what to fight, you’ll be building the dungeon around them, hoping to corral them into the path you want them to take. Aside from simply not building paths to the dangerous areas until you’re ready, you can also lure them in a certain direction with temptation of gems and coins.

Once you’ve placed your dungeon cards for the turn – cards can be monsters, loot, or rooms – your explorer will choose which way to go, and off they go! You’ll need to get them some levels and some gear on the lesser monsters before you try to take on the boss, of course. Levels are typical fare, but the card-based combat uses a combination of your gear to determine your deck composition. If you’ve got two pieces of gear with “Fire 1,” for example, your deck will include the “Fire 2” card set. It’s simple enough for anybody to enjoy, but min-maxers will have a great time stacking stats for access to the most devastating spells.

That’s all, folks! I hope you’re all as excited to see what the indie scene has for us in 2016 as I am. Happy New Year to all!