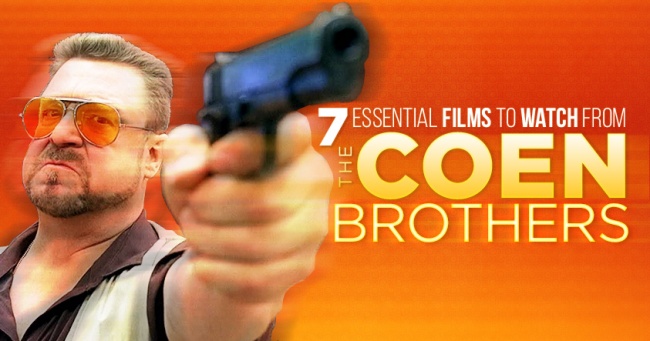 Last week saw the release of Hail, Caesar! As often happens with auteur filmmakers, this prompted a not insignificant portion of the internet to start ranking the films of the Coen brothers, its directors/writers. As is almost always the case, there was no consensus as to which film was the best. But there are several that made it to the top few films on almost everyone’s list, and today those are the one’s we’re going to be talking about. If you’re new to the Coen brothers and are looking for a place to start, or you just want to remember old favorites, you’re covered here.

The Coen brothers’ first film remains one of their best. Blood Simple tells a thrilling story about an affair, a private investigator, a double-cross, another double-cross, a misunderstanding, and a decent amount of bloodshed. It was made on a relatively small budget, it launched the careers of Frances McDormand and Barry Sonnenfeld, and it gave us a glimpse into the darkly comedic minds of its writer-directors – at the time, only one of them could be listed as the director. It’s also one of the few films on released on home video with a “director’s cut” that was shorter than the theatrical cut, reinforcing one of the reasons I like the Coens as filmmakers: they’re efficient with screen time.

After a pretty solid sophomore film in Raising Arizona – also worth seeing, but it’s not essential – the Coens went in a different direction with Miller’s Crossing, their ode to gangster movies. Another dark comedy, this one saw Gabriel Byrne try to keep the peace – and later, well, other things – between two rival gangs. It’s funny, it does a wonderful job using the strengths of the gangster genre to make one of the better ones. Look, once again, for the launch of a career: Miller’s Crossing was the first film for Marcia Gay Harden. Good characters, great acting, and a plot that feels complex even if it, in the end, isn’t, Miller’s Crossing makes for an incredibly fun watch.

Right after Miller’s Crossing – and actually written while struggling from writer’s block while trying to finish the script for Miller’s Crossing – the Coen brothers got to work on Barton Fink, reuniting with John Turturro, who had an important supporting role in the last film. Turturro plays the eponymous Fink, a playwright brought in from New York to write Hollywood scripts. But he suffers from writer’s block – how coincidental – and from there … well, you’ve got to watch for yourself. The film works on so many layers, from its take on Hollywood and its differences from Broadway, to the self-called “intellectual” and his struggle to relate to the working man. Turturro is wonderful, John Goodman‘s supporting performance is simply fantastic, and the disgusting hotel in which much of the film takes place feels like its own character. It’s also very funny, if you have the dark, twisted sense of humor that the Coens so clearly possess.

Returning to the genre with which they began, Fargo is a crime thriller. Frances McDormand is the star, here playing a police chief. Her task is to solve some roadside murders. But it’s not as simple as it immediately appears. McDormand shines in this role – she won the Best Actress award at the Academy Awards – the film as a whole has a wonderful plot that is clever, engaging, and funny. The film is gorgeous; it probably contains the second best cinematography in a Coen brothers film. And, well, it has that wood chipper scene. It’s been such an influential film that it now has a TV series based on it, and an entire film exists whose plot features a woman who saw Fargo on VHS and believed that it was real.

I’m not sure if one can have a “most essential Coen brothers” list without including The Big Lebowski. With its oddball dialogue, quirky characters, and trippy dream sequences, this has become a stoner comedy must-see. Featuring Jeff Bridges as “The Dude,” The Big Lebowski is a film that, well, kind of needs to be seen to be believed. It still Coen trademarks, like a kidnapping, a ransom, and a plan for double-crossing, but experienced through the eyes of a post-smoking bowler. It’s genius, and if you don’t like it, well, you know, that’s just, like, your opinion, man.

#6 No Country for Old Men

It took a while after The Big Lebowski for the Coens to make another great movie. You won’t get many people who dislike O Brother, Where Art Thou? or The Man Who Wasn’t There, but they’re not Coen classics – and let’s not get into Intolerable Cruelty or The Ladykillers. But in 2007, the Coen brothers got back to business with No Country for Old Men. An unbelievably tense film, the film follows three men – played by Josh Brolin, Javier Bardem, and Tommy Lee Jones – all with very different morals, and two million dollars. It’s a tough film to watch at times, even though it has so much going on – either plot-wise or thematically – has three fantastic central performances, and is stunningly gorgeous. It’s also violent and, according to some people, very nihilistic. But as a thriller? Thinking about it sends chills down my spine.

Before Oscar Isaac became the internet’s latest darling, he was snubbed for an Oscar nomination for Inside Llewyn Davis, the film that truly should have put him on the map, but for some reason didn’t. This one follows Isaac as a folk singer in the 1960s struggling to make it big. Isaac is tremendous, the supporting cast is wonderful – Carey Mulligan, John Goodman, Justin Timberlake, and Adam Driver are all great, to name a few – the sense of setting is so strong and immersive, and it contains a few musical performances which are very, very solid. Even the joke song of the film is great. And, to top it all off, it has an awesome cat. More films need awesome cats.

What are your favorite films or moments from the Coen brothers?