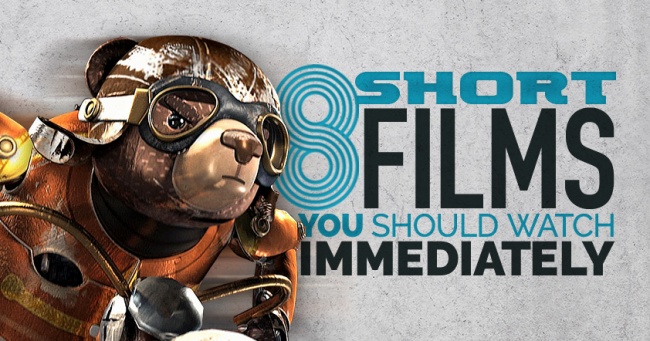 While this year’s upcoming Academy Awards have been rightfully taken to task (and boycotted, in some cases) for the lack of diversity amongst its nominees – “whiter than Hugh Grant’s ass after a long winter,” I believe they’ve been called – there’s another group of artists who will almost surely be neglected once again at this year’s ceremony: short filmmakers.

By “short filmmakers,” I obviously don’t mean directors and actors under 5’7″, but rather, the creative forces behind short films, who year after year are treated as but a footnote of the Oscars despite being just as talented than their feature-length counterparts. In all reality, the makers of short films might even be more talented, if only due to the fact that they are given far less time and money to tell their stories than the Alejandro Inarritu‘s of the world.

But with the popularity of short films steadily on the rise – just think of how many Vine and Youtube stars have become multimillionaires in the past few years – it’s about time that both we and the Academy of Motion Picture Arts and Sciences started paying more attention to short films, starting with this handy little list.

Released just a few days ago by The Raid: Redemption director Gareth Evans, “Pre Vis Action” is brilliant in its simplicity, allowing the renowned martial arts director to once again display his knack for shooting complex, intricately-choreographed fight scenes. Stepping away from the drug cartel-run world of the Raid series and into the realm of the samurai, Evans trades in the gunplay for, well, swordplay in what is essentially a 5-minute, straight up action sequence. And wouldn’t you know it, even Mad Dog (Yayan Ruhian) makes an appearance!

Directed by David F. Sandberg, this short horror film made huge waves upon its release back in 2013, winning ‘Best Short’ at FANT Bilbao festival and ‘Best Director’ in the ‘Who’s There?’ Film Challenge. A stellar example of simple-but-effective filmmaking, “Lights Out” was quickly snatched up by Warner Bros. and New Line for a feature-length adaptation, with Sandberg returning to direct and modern horror master James Wan (of Saw, Insidious, and The Conjuring fame) signing on as producer. Early test screenings for the film have apparently been through the roof, with some going so far as to claim that it will be “the next big thing in horror,” so make sure to catch it when it opens wide on July 22nd.

Speaking of short horror films that were adapted into feature-lengths, Nicholas Humphries’ “The Little Mermaid”short takes Walt Disney’s 1989 adaptation of Hans Christian Andersen’s most famous work, places it in the 1930’s Dust Bowl, and turns the creep dial up to 11. Beautifully cinematographed and featuring some incredible prosthetic effects, The Little Mermaid was a huge hit at nearly every festival it was entered in, scoring a win in the “Best Short Film” category at the Screamfest Film Festival. Its full-length adaptation, Charlotte’s Song, premiered at the Vancouver International Film Festival back in September to rave reviews.

The grand prize winner of the Philips Parallel Lines ‘Tell It Your Way’ international competition, Keegan Wilcox’s “Porcelain Unicorn” is a masterpiece of storytelling – the kind of film that you’d have to be made of stone to not be affected by. But aside from the story itself, Wilcox also demonstrates a real knack for efficiency in his camera work. In a genre of filmmaking where literally every frame must serve a purpose to the overarching story, Wilcox packs in a lifetime of emotion into less than three minutes of actual screen time.

Like your short films with a more political message? Well look no further than Let’s Pollute, a comedic satire from Geefwee Boedoe that scored an Oscar nomination of its own in 2010. Acting a sort of a 1950’s-style anti-PSA, Let’s Pollute is about, you guessed it, pollution – and more specifically, how hard we have worked as a species to create the toxic waste-filled, needlessly wasteful cesspool of a society we live in today. F*ck yeah, humanity!

Perhaps the greatest aspect of short filmmaking is the chance it gives the unknown and micro-budgeted artists among us to reach a wider audience. David F. Sandberg wasn’t exactly a household name before he got James Wan’s attention with Lights Out, but he might just be if his full-length movie becomes the hit it is primed to be. Likewise, it’s hard not to see some of that promise in Skyler Jenkins’ “Danny, Danny,” a creepy, claustrophobic short that is equal parts Session 9 and The Conjuring. Shot in almost complete darkness, “Danny, Danny” forgoes the ever-popular jump scare route in favor of a more cerebral take on a familiar ghost story, establishing a palpable atmosphere of dread early on and building upon it until the story’s conclusion.

At nearly 16 minutes, Your Lucky Day is easily the lengthiest entry on this list, but it makes equally good use of its time. A classic “how stranger’s lives intersect plot” centered around a winning lottery ticket, Your Lucky Day is at times dark, at times funny, and always entertaining meditation of how we react to otherwise horrific events when money is on the line. The ending twist that ties the whole thing together is especially well executed.

Gabriel Osorio’s Bear Story should be the frontrunner to take home this year’s Oscar in the “Short Film” category for a number of reasons, the least of which being the 50+ international awards it has been awarded since its release. The plot is a simple one: “An old, melancholy bear tells his life story through a mechanical diorama,” but Bear Story also works an allegory for the political atrocities Osorio’s grandfather faced while living in Chile. As Osorio himself puts it, “During my childhood I felt the invisible presence of an absent grandfather, who was not dead, but was not present in my life. My short film Bear Story is not about the life of my grandfather, but it is inspired by his absence and the mark it left on me.”

If you’re somehow still not convinced of the profound power that short films can have, feel free to peruse the list of previously nominated Academy Award short films and continue studying up. If you’re ready to get on board, however, now is the time to take to Twitter, start a petition, or write your local Congressman and demand that the “Short Film” category at least be included in the televised portion of the Oscar’s this year, or else we riot.